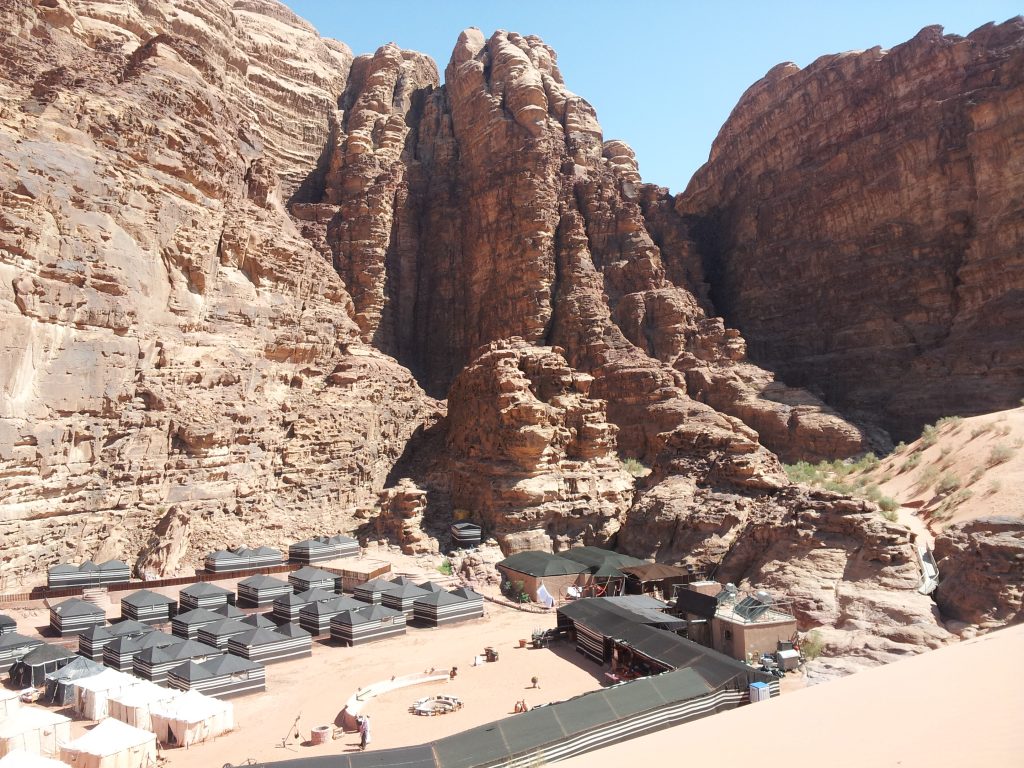 Having driven for around 40 minutes, the 4WD left the tarmac road and pulled onto the desert plain heading towards one of the towering rocky skyscrapers which had only been viewed from a distance. With the road back to Aqaba out of sight and the horizon warped by the shimmering waves of heat, the desert environment encompassed the senses completely.

The jeep now drifted and swayed as the driver veered off previous tracks that network the area, before finding traction to continue the journey. Rounding several more steep cliffs the ‘Rahayeb’ Bedouin camp came into view. The camp is surrounded by a rocky escarpment and sand dunes, creating a horse-shoe shape that allows protection from the desert’s harshest conditions. The distinctive black and white striped camel hair Bedouin tent, curls its arms around the fire that forms the heart of the enclosure.

As tradition and values of Bedouin life dictates, we were welcomed warmly under the canopy of the tent. The Bedouins were seated upon decorative cushions. Their sun weathered faces peering from beneath the distinctive red and white headdress, whilst sipping tea from miniature glass cups. Inside the tent the coarse material walls were adorned with local Bedouin handicrafts; camel saddles, musical instruments, arched swords and cooking utensils, a snapshot of everyday living. Everything has been evolved to cope with the semi-arid environment, the nomadic nature of Bedouin life has used an ancestral and intimate knowledge of the desert and mountain environment to survive for millennia.

It is not long before we jumped, once again, onto the back of the 4WD Jeep to go and discover the narrow gorges, natural arches, towering cliffs, ramps, massive rock landslides and caverns, that are home to unique animal life and flora and fauna. Wadi Rum region has been inhabited by the Bedouin for thousands of years. Generations have maintained an unbroken history breeding camels, goats and sheep while living in tents or in caves.

Many have left their cultural DNA upon the sandstone and granite canvases in the form of ancient inscriptions or rock paintings that can be found at many points across Wadi Rum. Reminiscent of the artist L.S Lowry’s stick figures, they are both simplistic yet accomplished. They testify to early human thought and the alphabet of the Thamudic and Nabatean people. Their art depicts the caravans passing through Wadi Rum and their dependence upon their life-blood the ‘camel’ and the activities, such as hunting which formed their daily life.

A short distance from camp ‘Rahayeb’ this ancient graffiti art can be seen above a great boulder that rests against a sheer and smooth granite face. Immediately above the boulder can be found a wonderful series of inscriptions dating back some 2000 years, it is easy to imagine a figure crouched atop the boulder indelibly leaving their artistic commentary of life during that time, across a few square meters of rock. The region is still inhabited by Bedouin families and it is still exhilarating to see a the camel trains, with their lolloping gait, moving across the sand dunes as has  happened for thousands of years.

A Bedouin in Wadi Rum

The porous sandstone mountains hold one common trait and that is the uniformity of their erosion and the constant war of attrition with the elements. Lateral lines of sand blasted ruts, run across every rock face, whilst the path of ancient waters has created alcoves, caves and fissures that look like ghoulish faces as one tracks the stone to its summit. Our 4WD meandered through ‘Siq Al Kurj’, following water channels that caused these great divisions between the mass of granite and sandstone.

We stopped at one of many Bedouin outposts, which offered shade under the tents and tea that was heating on the fire; this camp has a special connection with history. At the entrance, a boulder showcases several small and skilful carvings, the first depicting the angular Anglo-Saxon features of Lawrence of Arabia, with trademark headdress. This sits next to a carving of Sharif Faisal Bin Hussein, the great grandfather of His Majesty King Abdullah II. It was here that both men and ‘Auda abu Tayeh’, the head of one of the biggest Bedouin families, discussed the future of the region and planned the defeat of the Ottoman invasion during World War I.

Exchanging our 4WD for a more traditional form of transport, we mounted camels and with unmistakeable and measured strides, we set off across the open plain towards a view point. As another day was drawing to a close, seeing the sun set over ‘Wadi Rum’ is a ritual that sets in motion a frisson of activity. Modern caravans of visitors and Bedouin guides criss-cross the desert in Jeeps, on camels and by foot all scrambling to find an elevated plateau. Neighbouring rocky outcrops, silhouette human figures perched like pilgrims waiting for the sun’s mellowing rays to fan-out their corridors of light, before slowly melting into the landscape. This fragile terrain is ready to sleep and give centre stage to the night sky another dimension within this incredible wilderness. The cool desert night encouraged the pilgrims to turn their heads skywards and star gaze.

Back at ‘Rahayeb’ the fire crackled in the heart of the camp, the “Oud” (a stringed instrument similar to a Lute) was being played skilfully by its master, who was singing a traditional Bedouin melody to a few friends who were, once again sipping tea, in contemplative mood.  Bedouin music, performed largely at weddings and on special occasions, supposedly has its roots from the solemn rhythmic (recitation) declaration of poems from pre-Islamic times.

At these moments, one can feel that at least somewhere on the planet, life has barely changed since the earliest of times. Bedouin forefathers would have been seated in exactly the same way, next to open fires under a galaxy of stars, in this unique region.