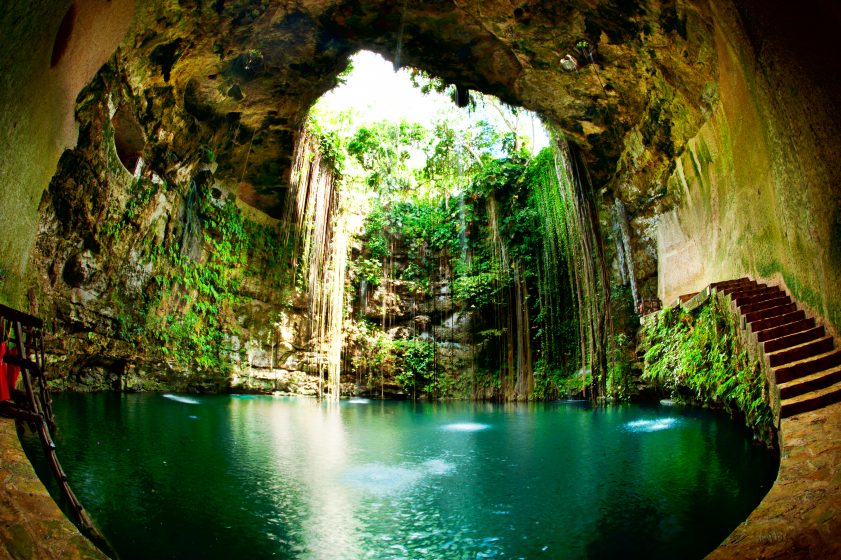 In under fifteen years, the small village of Tulum in the Yucatan peninsula has developed from a cheap, chilled-out paradise for backpackers into an uber-cool destination. It’s the ultimate in barefoot chic. With Bali, Goa and Ibiza creating an eastern-to-central continental axis of hedonism and bohemian delight, the Americas have enjoyed a relatively unsung partner in Tulum.

Situated on a long strip of glorious sand it divides the jungle from Mexico’s only Caribbean coastline and is an hour and a half distance along a straight road from Cancun Airport. This is a resort that attracts many of the A list including Cara Delevingne, Michelle Rodriguez, Demi Moore, Jared Leto, Reese Witherspoon, Cameron Diaz, Orlando Bloom and Heidi Klum.

Little has changed thankfully since I was last there seven years ago: a few more boutique hotels have opened up and there are a few more advertising signs. What is remarkable is the lack of fear. The entire resort is protected. There’s none of the hassle you might expect say in Goa. There’s only the occasional beach hawker and even then they show a respectful lack of persistence. No noisy jetskis, rubbish, no glass; only seaweed appearing for the first year in many, causing wheelbarrows to be filled by an army of workers in the midday heat in Sisyphus fashion.

Dipping into the inexorable waves of ‘body-surfing’ strength became my daily routine. I could have opted for the mental exercise and relaxation that comes from spas, massage, yoga and meditation centres. These are littered throughout, some promoted discretely (as was the sweat lodge celebrating a special day in the Mayan calendar), others more arrestingly, in a beckoning bid to gain custom.

Walking became my other healthy habit. In the midday heat I preferred the road but otherwise chose the beach. With such a lengthy strand there’s never any risk of coming to a dead end. I strolled in and amongst the local Mexican families enjoying their picnics. Eco-friendliness is very evident with many of the younger visitors biking up and down the main shaded road.

Popping in on half-hidden huts, on closer inspection, I discovered delightful places to stay. Real style hit Tulum on the arrival of the Italian hoteliers and restauranteurs across the Millennium. Each venue plays on the aesthetic themes of both hammocks, in their different sizes with some tasseled and others in mauve or orange.

And the novelty of the seaweed is actually a real asset. There’s no booking, no queues. All hotels and restaurants were breezy and spacious. The classiest hotels, with a special feel, were Be Tulum for its isolation and its translucent purple deck chairs, Ana y Jose for sheer comfort and The Beach for the glorious decking and stylish swimming pool. It does matter in particular seasons to get the accommodation right, especially having air con rather than a simple fan, a determinant that separates the wheat from the chaff.

These ‘hangouts’ always tastefully play second fiddle to nature. Pelicans patrol with an apparent lack of effort, and baby turtles on their debut venture out. Native petn, a teak-like wood, supports all the thatched roofs and local flowers zopitolera and agave morado, the green and purple leaf plants and orange-flowered trees called framboyant decorate the fronts.

For eating, Ziggy’s and Casa Violeta were special. There are the ever present avocados and limes and tacos .Try a mole with chocolate or camaros a coco (a dish consisting of prawns and coconut and mango and tamarind) Otherwise I recommend (in different dishes!) chaya (spinach) and arugula (rocket), hapones (cactus), chillies and chia, oregano, cilandro (coriander), papaya and coconut juice.

I needed time off from time off. I went to the local town that was my only regret across my ten days. It’s a tourist trap complete with loud restaurant renderings on the guitar of  ‘quanta na mera’ across my table. No I was not going to buy red roses!

I loved both the Mayan temple that was a holy site for worship and the burial of the dead and later on the entrances to the half-covered cenotes, underwater rivers, where sunlight slants through foliage and into the caves making the transparent water luminous. The best one I learnt was a local one called Dos Otos.

And also there’s the Sian Ki’an Biosphere, the largest protected area in the Mexican Caribbean. Here at last I found solitude, alone with the mangroves and wetlands, across channels and unroughened waterways to a long decking walkway. Looking around at the expanse was as much fun as down through the water. It’s what they call donde San Pedro perdió el guarache meaning the back of beyond; at the ends of the Earth (literally where St. Peter lost his sandal).

I decided to explore further up the Riviera Maya, to Playa del Carmen. It has an altogether more American feel (but it’s not like Cancun where every attempt is made to manicure nature, with trucks raking the beach at dawn). I was driven up a dust road that led to a discrete sign for Viceroy. It’s a hotel that is all style and luxury, bang opposite the island Cozumel and tucked between under-developed wasteland plots so while it’s still unspoilt it’s pretty clear what’s to come.

On arrival I was put into the local spiritual dimension with a traditional Mayan blessing. All bells and smells. Wherever you wander someone is monitoring with a clipboard in an attempt to ‘upgrade the stay’, It’s all thoroughly thought though right down to the offer to clean my sunglasses! All perhaps to ensure the resident monkeys swinging from above don’t mar the view.

For somewhere so beautiful it is perhaps no surprise that two American wives, flown down from the Southern States in no time, were waist deep in the pool (despite the sea being yards away) smoking, drinking cocktails and gossiping while their other halves vacuously threw miniature American footballs like missiles at each other.

The Mexican Spanish glossary I consulted has expressions indeed for each stage of losing your patience with someone. Alucinar a alguien is to be fed up with someone’s constant and not very welcome presence; pararse de pestañas describes losing it completely (literally, to stand on your eyelashes) while estar como agua para chocolate, to be absolutely furious (literally, to be as hot as the water needed to melt chocolate).

Adam travelled with Latin American specialists Chimu Adventures who offer a 7 day Mayan Riviera & Beaches itinerary from £535pp including hotels on B&B basis, transfers and excursions. All itineraries can be tailor made.