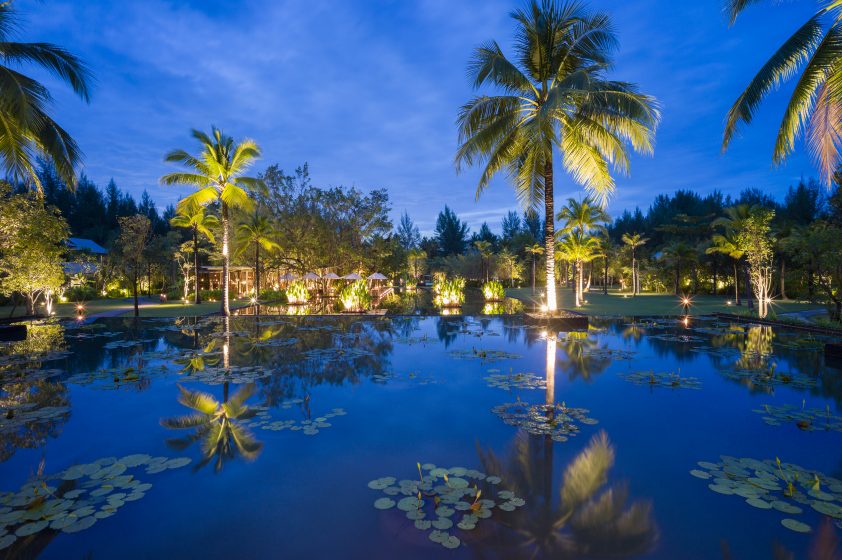 There are a host of luxury hotels across the island but I wanted to experience those that offered a special authenticity. Those that blended in with their surroundings. Hotels with their own story and not merely offering jungle living with Wifi.

Could, thirty years on, the appeal still be there on an island steeped in mass tourism? Not all of Phuket is now attractive. Garish boards and gaudy buildings, long traffic queues and party-seeking tourists have left their mark. But emerging out of the jungled landscape are some wonderful places to stay. And I want to attempt to do them justice.

Initial impressions set the tone, reassure, pamper even. They take away all life’s normal responsibility. And, my goodness, Thai hotel staff know how to ‘do’ hospitality. When greeting, they hold their hands together in front of their hearts in a prayer-like position and nod their heads. And they simplify matters with wonderfully evocative names such as Mint, Nurse, Nine, Lucky, Touch, Film and Risky.

Nine collected me from the airport. We arrived at Indigo Pearl. It’s a hotel proud of its industrial imagery (with tool-shaped cutlery and propeller fans cooling the patio) reflecting its former role as a tin mine. Similarly, the rooms have a very masculine feel, grounded as they are with large, heavy doors.

The highlight is in the landscaping with a gorgeous infinity pool and shaded avenues of vibrant shrubs and cacti and scented white flowers called Champak and Leelawadee and the red spiky Helicopia. The trees compete for light and cleverly eclipse the buildings giving an overall relaxing green tone.

The next province north of Phuket is Khao Lak. Less spoilt and less built-up. Long may that last! The beaches are clean and empty with strands going on for miles. I stayed at The Sarojin, a stunning boutique hotel. What a joy to be invited to share the passion of the owners’ personal dream.

The vision, created by Sim Boon Yang, a Singaporean architect, reflected the owners’ desire for “a resort that was empathetic to the surroundings and reflected the simple beauty of the site”. The rooms are very Zen, with an ‘inside-outside’ feel. The serenity and classic tones are truly refreshing. The ficus tree in the middle of the land is “the focal point and spiritual heart”. Even the spa is positioned close to the beach in order for the lapping of the sea and bird songs to be incorporated into the experience. The extraordinary service is palpable from a staff so clearly enjoying the shared dream. Indeed 50 of the 56 rooms are named after the families who helped rebuild the hotel after the tsunami in 2004.

A few days later I returned to Phuket. Next up was Keemala. Pisit Aongskultong, in his vision, has used sustainable materials for what is a new luxury eco-venture. It has its own distinctive brand, new to Phuket of both fantasy and nature. Resembling the Beijing Olympic stadium, the mesh exteriors of the villas seem suspended in the air. As for the ‘pool’s nest villa’, it has a bird’s nest theme with round wicker basket beds with grand mosquitos nets looking out to sea across Kamala Beach. Unlike most modern structures, Keemala will effortlessly benefit from the seasoning process. The foliage will become more bountiful and lush and the nature will brim and enhance it.

The hills and treetops embrace the bird’s nest theme. Each room has its own tree. Frogs are teeming and crickets are chirping. And the Thai language has an expressive vocabulary for their noises!  Jiap jiap is the sound of chicks; “ake-e-ake-ake” of cockerels; “gaa gaa” of crows and “hook hook” of owls. And at night there’s magic in the evening wicker lanterns scattered across the slopes.

And finally to Amanpuri. I arrived to have a fragrant heart-shaped jasmine bracelet placed on my wrist. Set in a mature coconut plantation and meaning “place of peace’ Amanpuri has real economy of design. While minimal, it is luxury in an expansive sphere.

Ed Tuttle was the American architect who in the early 80s built on a former copper mine and opened in 1988 this flagship Aman hotel. With 40 pavilions and 44 privately-owned villas the design is inspired by Thailand’s former capital Ayuthia. It is built with makha wood, golden brown with dark veins, and teak which was considered a ‘royal’ tree by the kings of Thailand and Burma. The lighter wood in the roof tiers gives it depth and breathing space from a distance.

The design embraces authentically the Thai tradition and is timeless and serene with intelligent spacing between the restaurants and swimming pool. The sloping location is enhanced with cascading stairs and raised steps that took me down from the rooms to the lobby. Even more magnificently, straight out of a stage setting from Aida, it took me down again from the pool to the private beach.

Everywhere has had the feng shui treatment. The lobby is open-planned, airy, counter-free and welcoming, There’s a flow and balance. Each villa has been designed to ensure true privacy.  There’s a nautical feel to the rooms. The wonderful outdoor ‘sala’ sun deck, smells of sweet varnished teak.

It’s all so efficiently run and the staff keep an attentive but low profile. Mosquitos are present but Deet is good and so I was told is “marmite and gin and tonic”. Interestingly Trudy Rilling-Collins, an American lady, was brought in by the innovative general manager Paul Linder to minimalise the mosquitos. On researching the pests’ habit of only living within 100-150 yards of steady water for their eggs to hatch, she uses a labour-intensive but highly effective ploy of draining the still waters. It needs constant attention but keeps the customers satisfied! As do the hotel’s airport staff who whisked me through the crowds to take care off the arduous task of returning myself to the world of responsibility.

Planning to visit? Don’t forget to read Soumaya’s Halal Guide on how to make the most out of your trip!