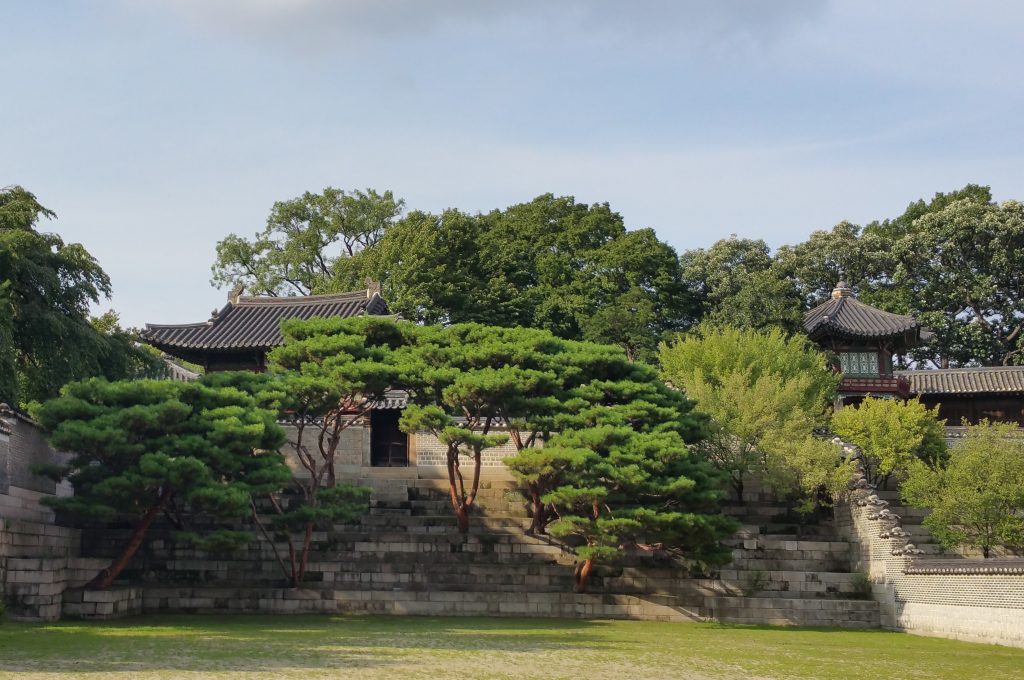 When someone says South Korea, you think of K-pop, K-dramas, possibly North Korea. When someone declares it as their new holiday destination, you think that they were a lot more into Super Junior than you originally thought. However, after spending a month discovering every inch of the second largest metropolitan city, I arrived home with both a heavy heart and a resolution. A resolution to show the world, or at least my readers, the true wonder we are all missing out on that is Seoul.

Although I enjoyed most places I visited, there were a few that became instant favourites. Cheonggyecheon is definitely one of those places. In a city renowned for its economic success, work life can often be a rigorous and tiring regime. As a result, in 2005, a large-scale urban project was undertaken in which an overlooked stream in Seoul was to be transformed into a national treasure. 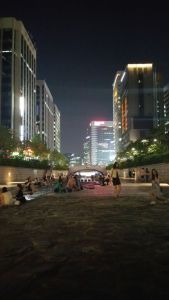 A few months later and Cheonggyecheon was completed, a charming waterway covering a stretch of over 10km, overflowing with tranquillity and character. It acts as a welcome source of respite from the hustle and bustle of the city. During the day city workers sit with packed lunches laughing at the latest office gossip, whilst school children squeal in delight as they dip their toes into the cold water. During the night, couples occupy the stream in full force, huddling together and immersing themselves in the forgotten art of conversation. Performers line the waterway, their acoustic talent amplifying the mood of intimacy and making one realise that Boris Johnson really needs to step up his game.

Hongdae is the place for all music, dance, and general fun-lovers. It is also called the area for the youth, and after a few moments, it’s easy to understand why. In the middle of a wide pathway lie several performance spots, occupied by those eager to display their talent.

From singing to breakdancing, it’s almost like walking onto the set of Korea’s Got Talent. The exciting atmosphere is on a constant loop, with eccentric and charming performers, such as Jung Sun-Ho, a masterful guitarist, interacting with the audience and even inviting them onto the stage. Cute shops form a border around the performance square, selling everything from quirky phone cases to ‘Hello Kitty’ chopsticks.

A few metres north of the square one finds a live-band café haven, with row after row of eateries providing free live performances. If you cannot find one in particular, a ‘tourist information’ office sits in the middle of the pathway offering guidance. My own experience of the live-band cafés is not to be understated. A talented duo, who go by the name of ‘On the Five Lines’, pair a soulful voice with a masterful guitarist, sending goose bumps up our arms. And with pretzels on a constant re-fill, it was a perfect evening.

Seoul has a massive dessert culture, with hundreds of cafés dedicated to perfecting the art of Korean dessert. There are several which were new experiences to myself, such as Bingsu, or shredded ice. This is typically adorned with fruits, green tea flavouring, or my favourite, red bean paste.

Mango Bread- 3 slices of toast are sandwiched together with chewy rice cake and topped with whipped cream, fresh mango chunks and syrup

In Seoul, everything matches, and in some cases – exceeds – the description and the picture, so you can walk into a café reassured. The system of ordering is efficient, with pagers buzzing on the table after only a short wait for a dessert sure to send your taste buds into a state of euphoria. Korean toast was something I had never tried before, and something I have yet to find in London upon my return – I write bitterly. With regards to savoury foods, I am aware that Korean cuisine has a rather unfair reputation for eating unusual dishes, such as dog or cat. What is ironic is that it was a lot easier to find a vegetarian meal than a dog burger, which I never did. Korean cuisine is unique and leaves one craving for more.

Chocolate bingsu on the left, and injelmi (bean powder) bingsu on the right. In the middle are two small cups of condensed milk which is drizzled over the top.

From Kimchi to Kalbi, there is an option for everyone, Halal, Kosher, Vegetarian and so on. In areas such as Itaewon, Halal restaurants flood the area. Al-Makan is a Halal restaurant owned by a Korean convert, providing authentic Korean cuisine such as Bulgogi for those tourists who otherwise might not have been able to. The food is also delicious, making it the place to go.

Grab four talented chefs, sprinkle them with musical talent, add a pinch of humour then leave to set. Lo and behold, you have Nanta. Nanta is a non-verbal Korean musical which entertains over 750,000 annually and has an overwhelming figure of over 8 million spectators under its belt since its first production. Since it is non-verbal, it’s completely tourist-friendly as the language barrier is obliterated. After a very thorough reminder not to try any of it at home, the production begins by submerging the audience into a blackout. Then, slowly, the production makes progress and captures everyone with the characters wit, charisma, and sheer culinary talent. Other than feeling a bit low about your own cooking skill, it is a generally feel-good production and is likely to leave you clutching your seat from laughter.

Hanok Village will transport you to another era. It is because of this that it is a very popular site for historical drama directors, with many famous shows claiming it as their set. Cardboard cut-outs of famous celebrities in their historical costume stand scattered around, allowing fans to take photos pretending they’re the real thing. The historical architecture of Korea varies greatly from Downton Abbey, and provides an interesting insight for those who haven’t yet visited the Orient. Many experiences are also available; you can take part in a traditional wedding, weave a basket, and get tortured. Performances are held several times an hour, such as a farmers music show, a dance show, and an equestrian show, consisting of a level of talent and synchronisation I had never before witnessed. All-in-all, Hanok Village was definitely one of the more interesting parts of Seoul I visited.

Namsan Tower is the tallest tower in Seoul, and the view from the top is unrivalled in all of South Korea. For a 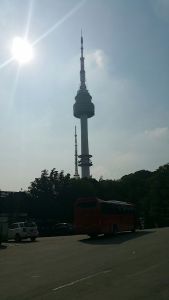 small fee of 7,000 won (around £3.70) you can enjoy a panoramic view of the second largest metropolitan city in the world. In comparison, the Tokyo Sky Tree is around £13, and the London Eye an eye-watering £23 for half an hour. The system, like all the others in Seoul, runs with great efficiency, with lifts coming and going every few minutes to the top and regular briefings from staff members. At the top, cafés, souvenir shops, and photo booths are plentiful to allow visitors to forever remember the day that they visited Namsan Tower.

To conclude, if you are looking for a new holiday destination that includes; fun, music, dancing, good food, good service, great weather, and so on, then Seoul is the destination for you.

All images are copyright protected and are the sole property of the International Interest. Reproduction of the images may not take place without the Ii’s permission.