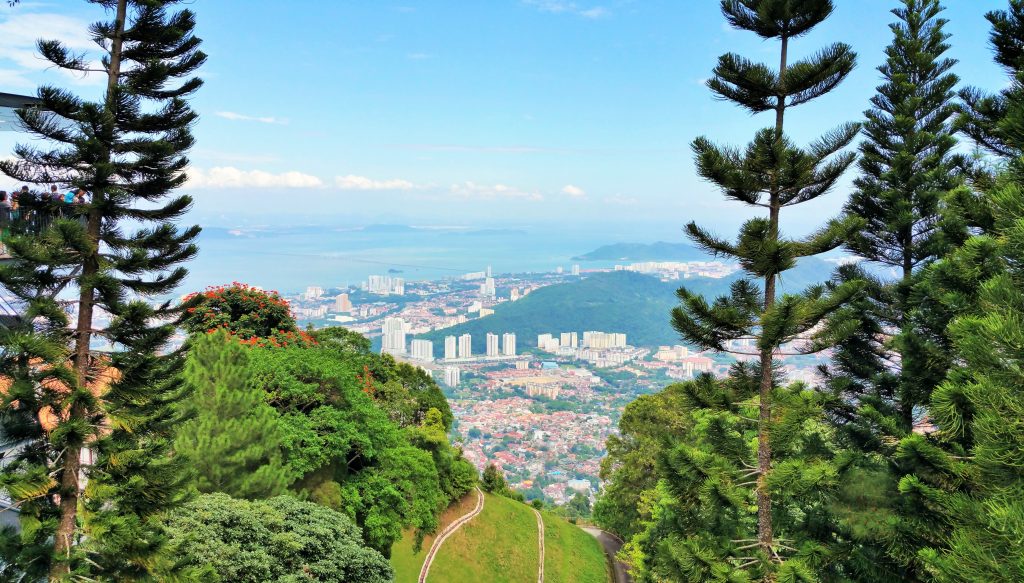 Visiting Penang, a state in north-western Malaysia, has long been on my traveller’s bucket list. The island is world famous for its delicious array of oriental cuisine, and what better reason to travel than to sample food? But Penang offers so much more. From the golden sands that hug the island caressed by crystal jade waves, to the trekkers’ trails in Taman Negara, or the colonial architecture in UNESCO World Heritage Site Georgetown, there is something for everyone in the Paradise that is Penang.

View on the E2 between KL and Penang

My husband and I arrived in the evening after a long day of travelling by car from Kuala Lumpur (referred to by the locals as KL). It is possible to fly or take the train, and ferry to the island, but we chose to hire a car upon recommendations by locals that it was the best way to experience Malaysia. Despite competing with other drivers’ overambitious ability to change lanes at the last minute without signalling, the drive was well worth the scenery. We sailed downhill through steep hills and lush swathes of palm trees on either side of the highway, and even passed a sign which appeared to warn of wandering cattle (?!). After 3 hours on the road (and a stop at Dunkin Donuts), the bridge which connects Penang to mainland Malaysia came in sight. We arrived at the suite, dumped our luggage where we stood, and set off to fulfil important business- eating!

Penang is full to the brim of places to eat, and there is something for everyone. Restaurants serving Korean BBQ, Indian curries, traditional Nyonya cuisine and yep, your average deep fried fast food, are ubiquitous on the island. To taste the real flavour of Malaysia I headed to Gurney Drive where the Hawker stalls serve some of the country’s most famous Asian cuisine. In the spirit of experimenting I ordered a bowl of curry mee, which is a noodle soup flavoured with curry paste, balanced by coconut milk and dotted with prawns, tofu and a dark, rubbery, serrated looking sea creature I am ashamed to admit I did not recognise.

I washed this down with a bowl of what is now one of my favourite desserts; cendol, which consists of shaved ice, pandan jelly noodles, red beans, rich palm sugar and yes, more coconut milk! The dessert is reputedly healthy but, more importantly, tastes delicious and is the perfect way to cool down after a hot meal in the humidity of the Hawker market. The beauty of buying and eating street food is that unlike in most restaurants, you are able to watch your meal being made, filling your senses with the sounds and smells of the food you are about to enjoy.

After a restful night’s sleep in our apartment, we headed out next morning to explore Penang’s national park, Taman Negara. At the entrance to the park are locals offering a beach hopping tour of the shores and mangroves surrounding Taman Negara. The other way to the beaches is through the trekkers’ trails marked out for visitors in the park, which are teaming with butterflies and monkeys. Taman Negara also boasts a canopy walkway; unfortunately we were unable to experience it this time because it is closed for maintenance for the next few months- providing the perfect excuse to return to Penang!

In any case, trekking through the humidity of the forest wore us out, so off we headed to Batu Ferringhi beach to cool down. The beauty of Batu Ferringhi is that it is not teeming with tourists; we found a beautiful, clean stretch of golden sand upon which to relax after a dip in the ocean’s cooling waters.

The next day we headed south to Penang Hill- which, compared to the hills here in England, really is more of a mountain. A carriage called a funicular has been taking people up and down the hill for almost 100 years. Don’t worry though, the carriage has been updated! In spite of this I was admittedly afraid of using the funicular, since the tracks follow the steep incline of the hill. After gathering enough courage I bought my ticket and entered the carriage, wondering how on earth it was going to drag itself up the hill at such an incline. Incredibly, we began to travel at a leisurely pace through deep green lush greenery. I spotted some huts and a beautiful whitewashed villa; it turns out that there is actually a community of people living on the hill.

The end of the tracks lead to a viewing station where Penang can be seen in all its glory. A dull haze veiled the island’s buildings, past which could be seen the two bridges leading onto the Malaysian mainland.

After travelling back down via the funicular (which was slightly more daunting than going up), we drove around the UNESCO heritage site that is Georgetown. I noticed the remains of colonial rule- Penang used to be a port for the British East India Trading Company. Lorong Bangkok is a lane filled exclusively with beautiful pastel coloured townhouses built in the 1920s for the sole use of the Cheah and Kee families.

A ten minute drive away took us to the little gem known as the blue mansion, built towards the end of the 19th Century by Cheong Fatt Tze, a Chinese financier and diplomat who owned mansions across Asia. The mansion has retained an almost ultramarine shade of blue and is now used as a boutique hotel, allowing visitors a taste of the life of a rich Chinese entrepreneur who was alive over a century ago. To me, the building is reflective of Georgetown as a whole; while it has welcomed modernity by adapting and embracing modern-day conveniences (there was even a KFC nearby!), its history and identity have been looked after and cultivated for future generations to enjoy.

This fusion of past and present is evident across Penang, and no more is this so than in the glitzy shopping areas which house every experienced international shopper’s regular go-to stores at Gurney Plaza. Nearby are numerous beauty treatments and pampering services on offer, ranging from spa experiences and reflexology massages to, more surprisingly, cosmetic surgery boutiques (though on second thoughts, cosmetic surgery is very common in some Asian cultures, such as South Korean).
I have fulfilled my long-awaited dream to visit Penang and I have not been disappointed, but my appetite has not yet been satiated. Whether it is exploring the island’s natural beauty, drinking up its history or enjoying some R & R, there is always something to do in Penang, and the best bit? There is something for everyone.

*All images are copyright protected and the sole property of the International Interest. Reproduction of the images may not take place without the I.i.’s permission.