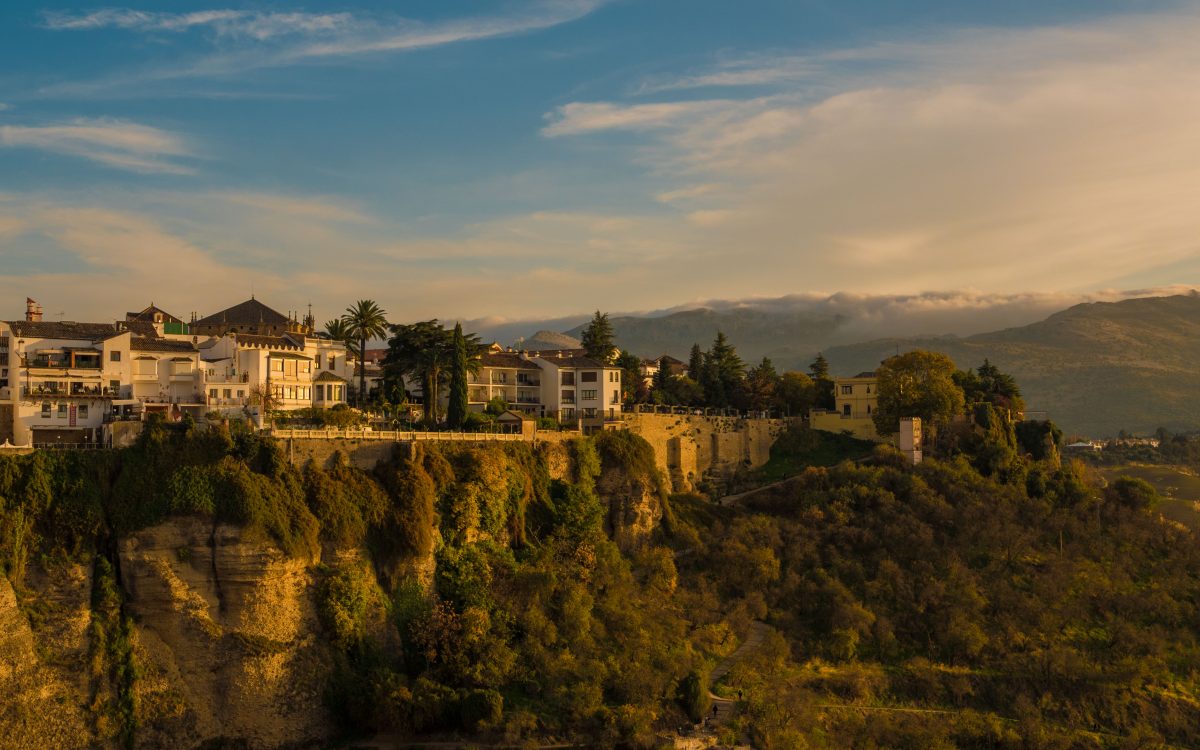 The Mezquita-Catedral in Cordoba at dusk. All rights reserved Soumaya Hamdi.

This is the second half of a two-part series that sees British Muslim travel writer, Soumaya, explore the cultural legacy of Andalucia. For Part I click here.

He was known as ‘Blackbird’ for his colour and melodious voice, and his name was Ziryab.

If, like me, you live in Europe, chances are you may never have heard of him; a man whose legacy is imbued in some of the most fundamental aspects of present-day culture. Ziryab is believed to have popularised the use of deodorant and toothpaste, along with customs that we still observe today, such as starting a three-course meal with soup. Whether all of these things really started with Ziryab or not, the greater takeaway here is that Muslims in Europe have a longstanding history in the region, and have long been valuable members of their local society. 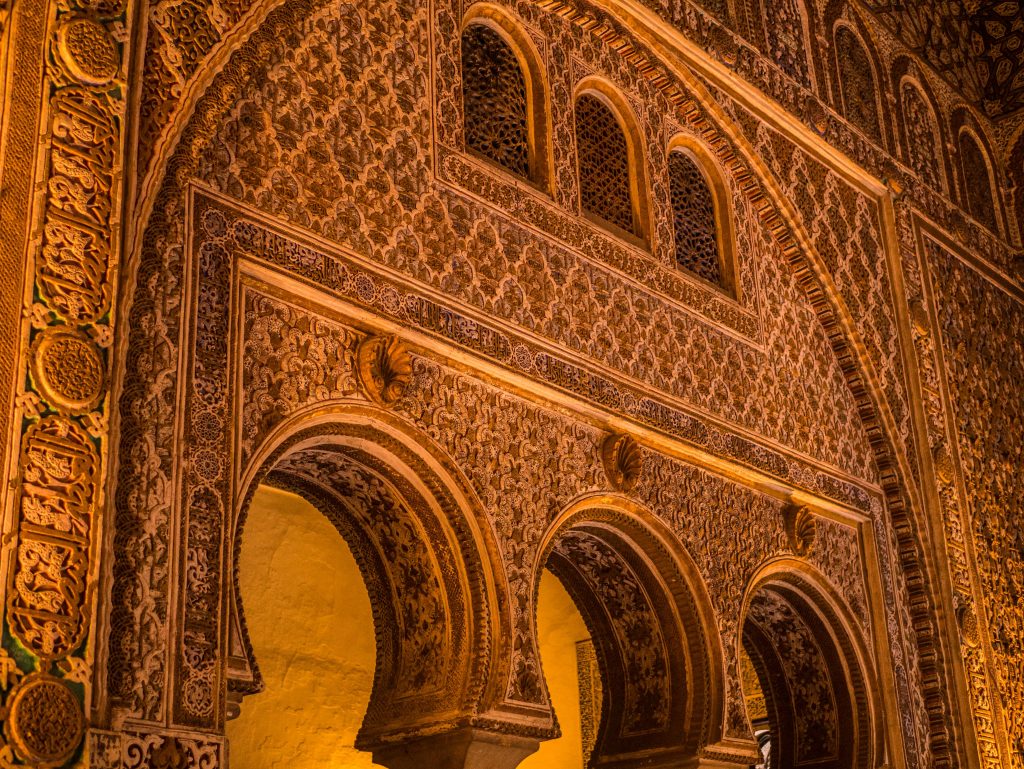 Moorish-inspired architecture in the Real Alcazar, Seville. Although the palace was built for use by a Christian royal family, Moorish architects were employed. The palace bears the name of Allah on its walls, much like the Alhambra in Granada. All rights reserved Soumaya Hamdi.

‘The Coexistence’ describes Al Andalus from the 8th Century onwards, when Muslim rule allowed for a culture of openness that enabled an intellectual and cultural boom. Ziryab is a symbol of the cultural superiority that grew to define Cordoba and spread through Al Andalus, making the region a vital cultural hub and bridge between East and West. 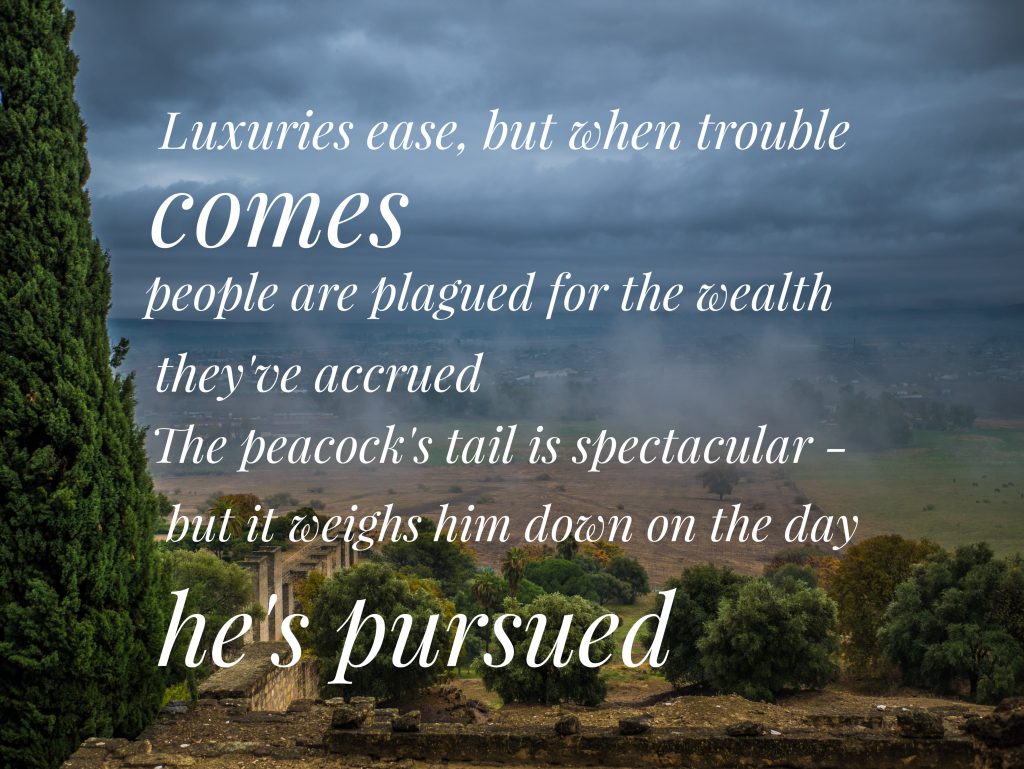 Shmuel HaNagid, 993-1056 AD, one of the most fascinating figures of 10th Century Spain. HaNagid was a Jewish scholar who became head of the Muslim army and prime minister of the kingdom of Granada.

‘Did you know?’, Rafa continues, his eyes twinkling with enthusiasm, ‘that most texts on Greek philosophy were not available in Europe during the Middle Ages, because of a lack of Latin translations?’

Were it not for financial investment by the caliphs and sultans to translate Greek texts, famous works by the likes of Aristotle may have forever been forgotten in Europe.

Considering how much Greek philosophy influenced European thinkers, the potential implications of this are profound. Having studied in the UK all my life, the Middle Ages are taught as something of a black hole in between the end of the Roman Empire and The Enlightenment in the 18th century. Listening to Rafa’s tales of the exceptional thinkers, mathematicians and physicians that emerged from Andalucia has me wondering how representative the narrative of ‘The Dark Ages’ really is. 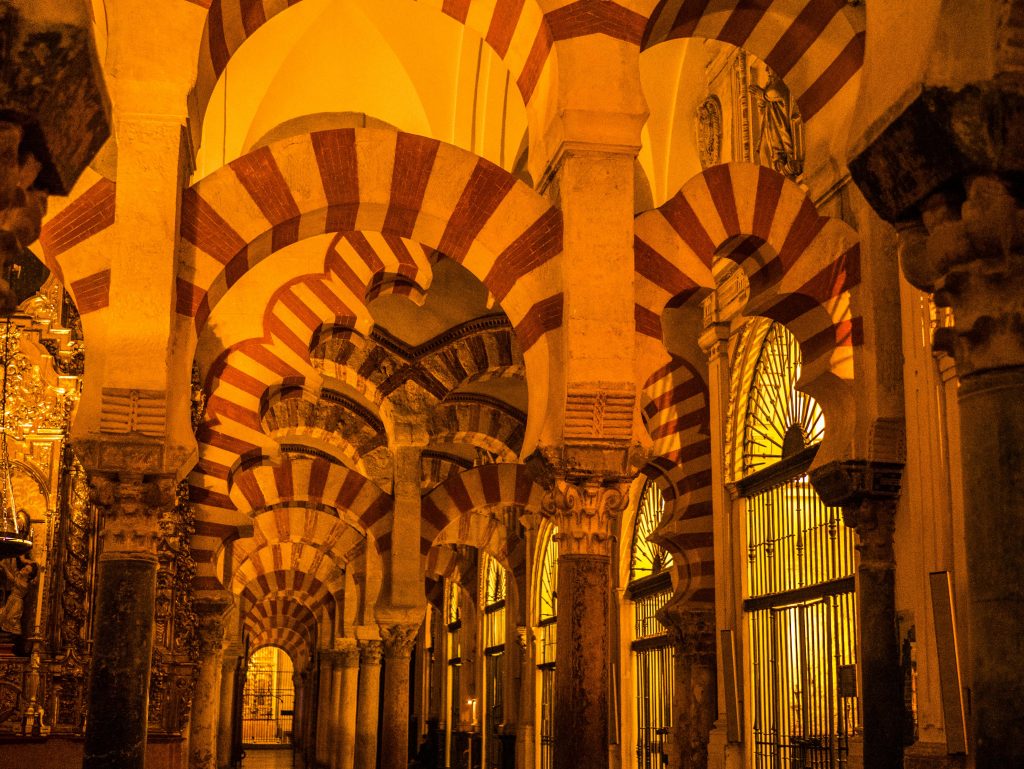 The elegantly simple horseshoe arches and marble pillars that make the Mezquita’s architecture so famous. All rights reserved, Soumaya Hamdi.

As I walk through an orchard of arches and marble pillars in the Mezquita, I try to imagine the worshippers and intellectuals, scholars and students, in whose footsteps I now tread. Large enough to hold 40 000 people, the Mezquita was the jewel in the crown that was Cordoba.

Alas, nothing lasts forever, and the Mezquita was dramatically altered when Cordoba was lost to King Ferdinand III in 1236. A cathedral was built within the mosque walls, but it looks like little consideration was given to maintaining the architectural integrity of this symbolic building. Mahogany pews and baroque portraits look misplaced inside the cavernous halls alongside the elegant simplicity of the red and white horseshoe arches. 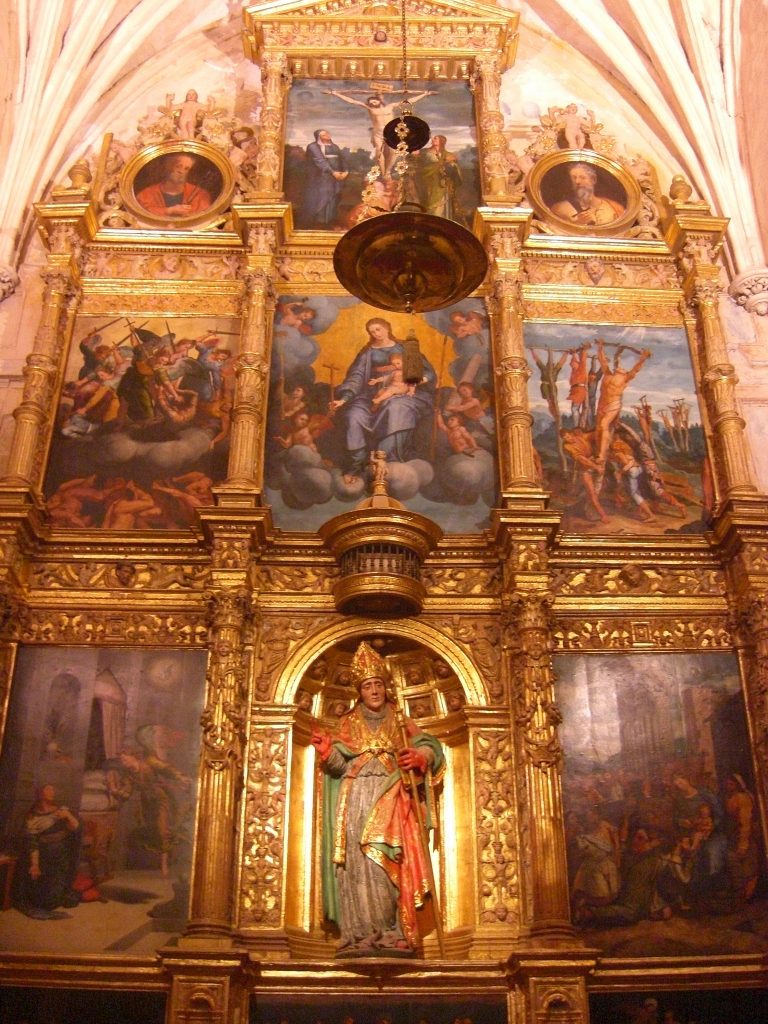 Inside the Cathedral quarter. Photo by Olivier Bruchez, Flickr.

Alongside the conquest came Cordoba’s gradual decline in importance, bringing an end to its eminent position in the world as a centre of light, knowledge and freedom. I can’t help but feel morose about the decline of this once great city, but as Marcus Aurelius once said:

Look back over the past, with its changing empires that rose and fell, and you can foresee the future, too. 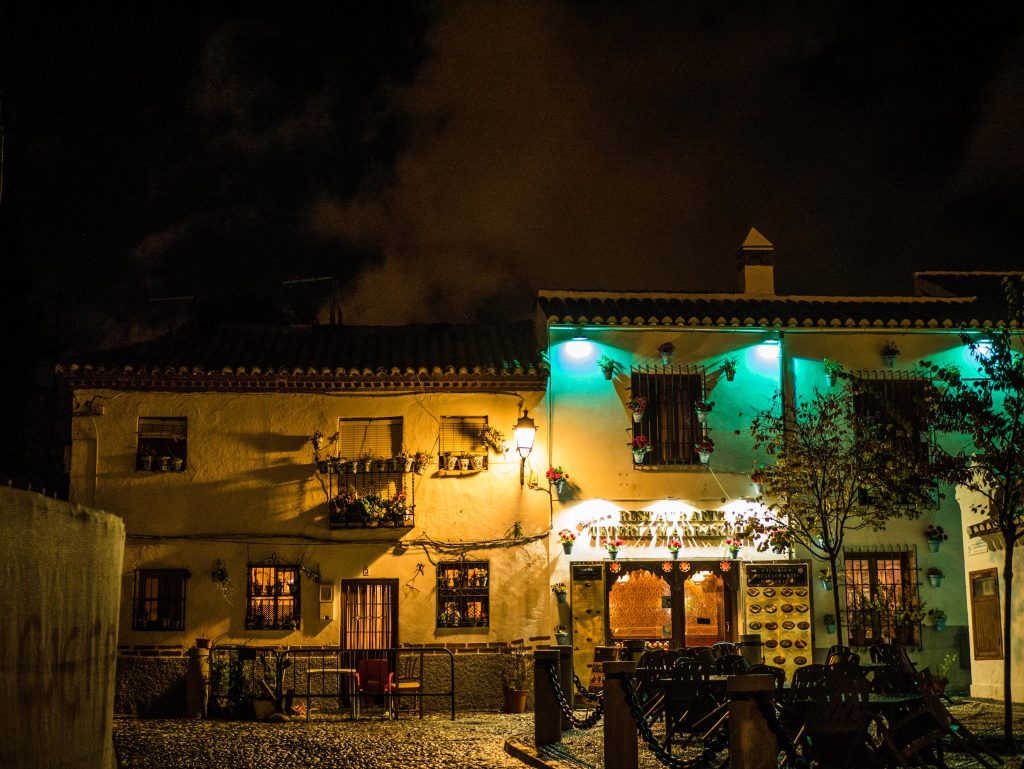 The quaint cobblestone streets of Albaicin are very distinct, and sometimes too narrow to fit a car through. This photo was taken outside the Mosque of Granada. All rights reserved Soumaya Hamdi.

The final stop on our Andalucia adventure is Granada, the last surviving emirate of Muslim Spain before it was surrendered to King Ferdinand and Queen Isabella. We head up into the rocky terrain of the Alpujarras mountains, and drive through an ocean of jagged peaks and olive trees.

It being long past lunch time, Alaudin takes us to Baraka Café, a cosy hive of activity and warmth in the small town of Orgiva. Even though it is a cold and drizzly day in late November, the café is buzzing with patrons. The menu boasts meals that are made from halal, organic and local produce. Being a frequent patron, Alaudin orders us a selection of dishes that he assures us will satisfy everybody’s tastes. 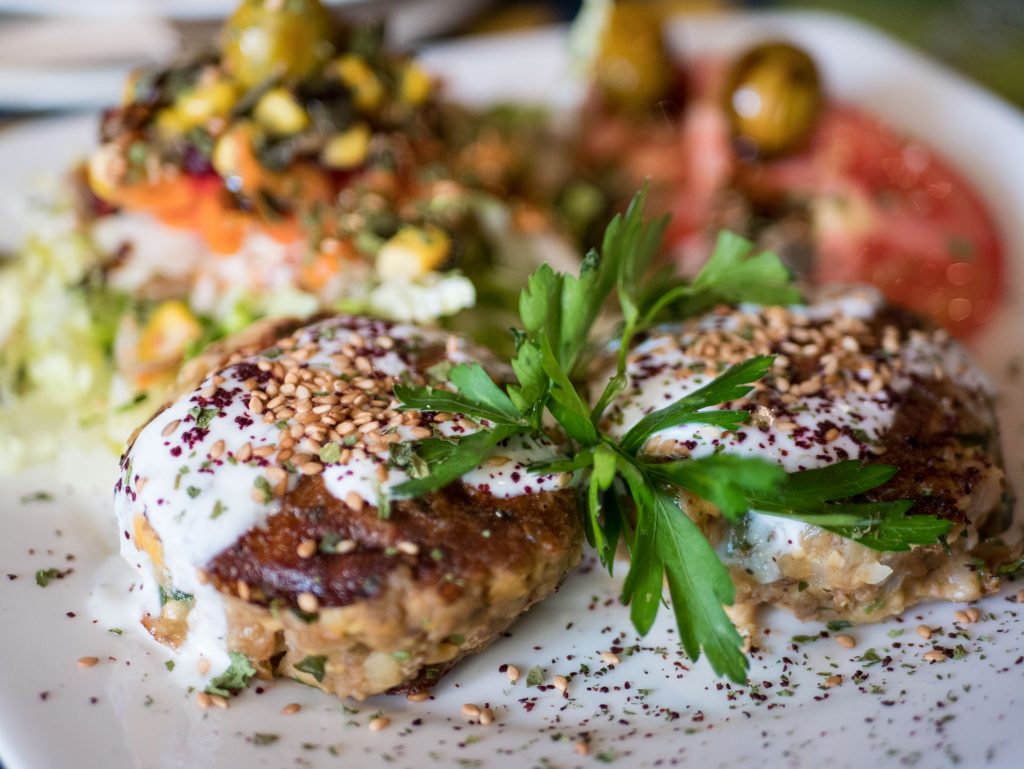 Each of the dishes were beautifully presented. Photo credit Soumaya Hamdi 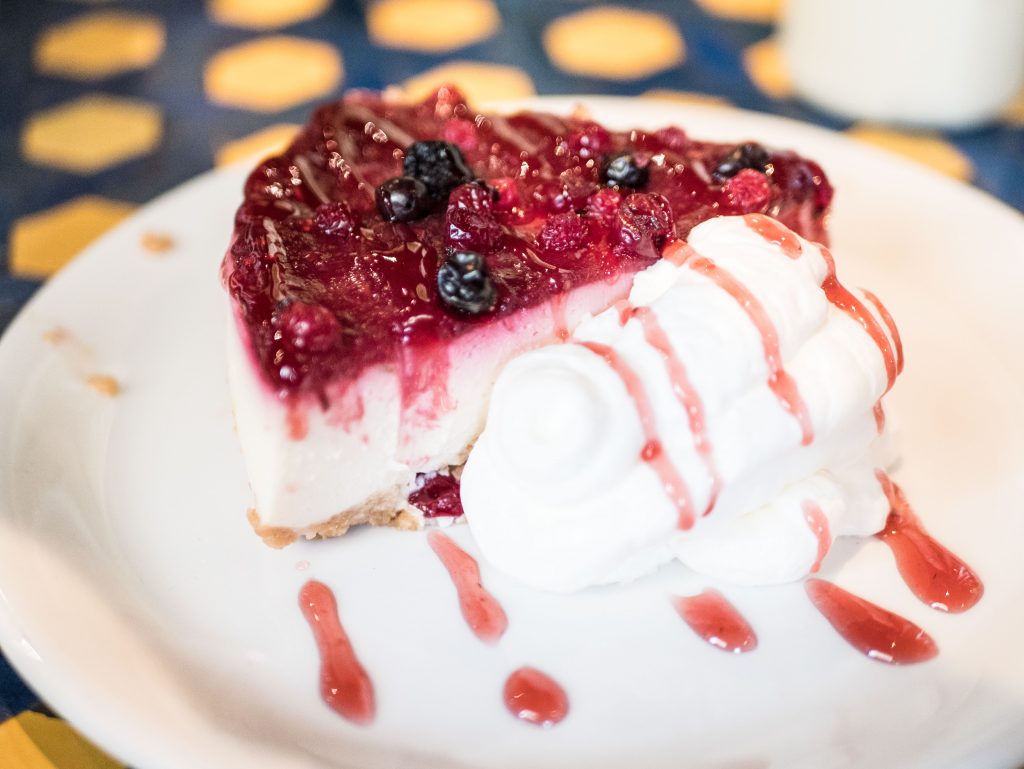 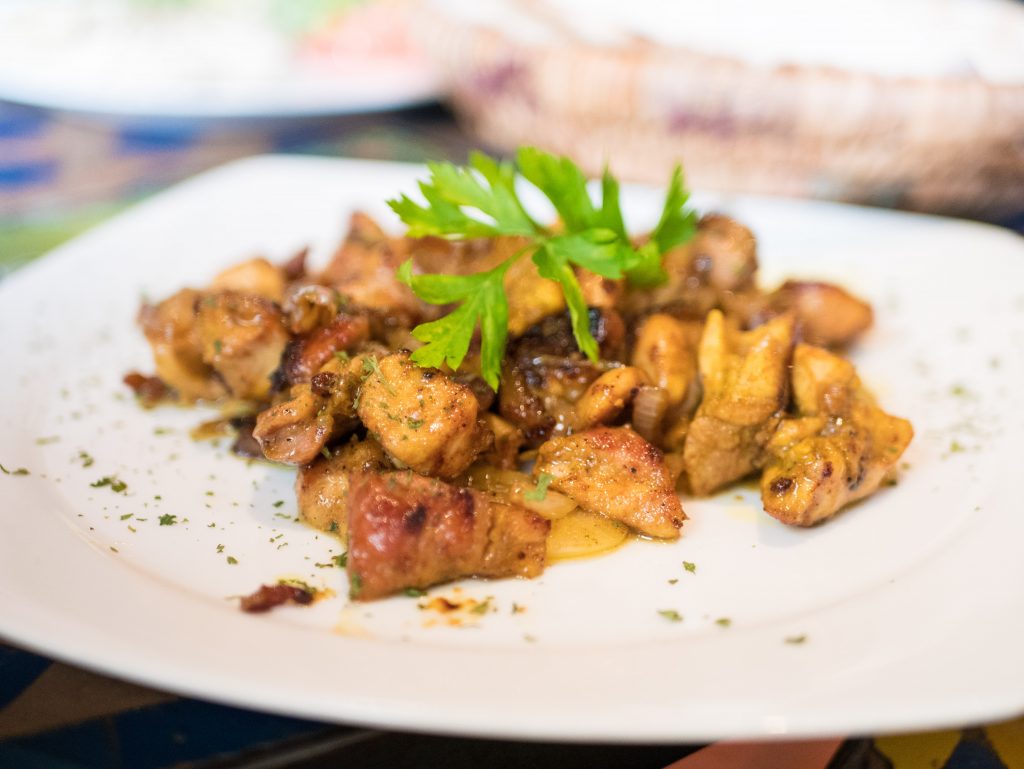 The deliciously marinated chunks of chicken. I was too hungry to capture an image of the risotto or couscous! Photo credit Soumaya Hamdi

First up is a dish of delicious chunks of marinated chicken alongside glasses of freshly squeezed orange juice. I try the most creamy mushroom risotto in the world, but am a little more wary of the vegetarian couscous that is served on another plate. Being of Algerian heritage, I can be somewhat of a snob when it comes to how my couscous is made, and would never order it in a restaurant. My scepticism is however completely unwarranted; I try a spoonful and am immediately won over by a mouthful of flavour. A poached peach soaked in what tastes like orange blossom water is married surprisingly well with the mildly salted couscous, and transports me back to one hot summer’s evening during Ramadan in Algiers. 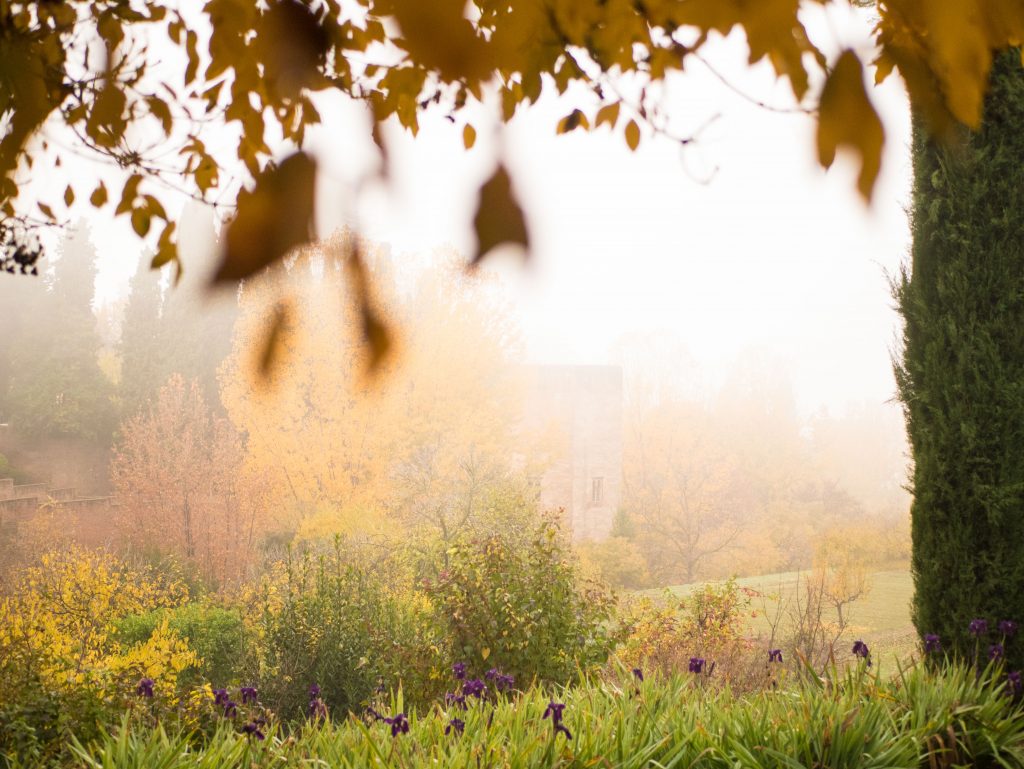 A misty Autumnal morning in the Generalife Gardens. All rights reserved Soumaya Hamdi.

It is, however, very much Autumn, and a quick look through the café window shows we have only a couple of daylight hours left.

One of the benefits of visiting at the end of November – apart from the lack of tourists – is that the boulevards are lined with trees pregnant with oranges and sweet clementines. Tempting as it was, I did not like the idea of being stopped for picking oranges from the tree-lined avenues. I must have drunk a glass of freshly squeezed orange juice at least once a day, so you can imagine my joy when we visited an orchard and were invited to pick the sweet and juicy offerings straight from the trees. Set against the dramatic backdrop of evergreen mountains and Lord of the Rings-esque mist, it provided the perfect surroundings in which to reflect on my spiritual and intellectual journey through Spain. 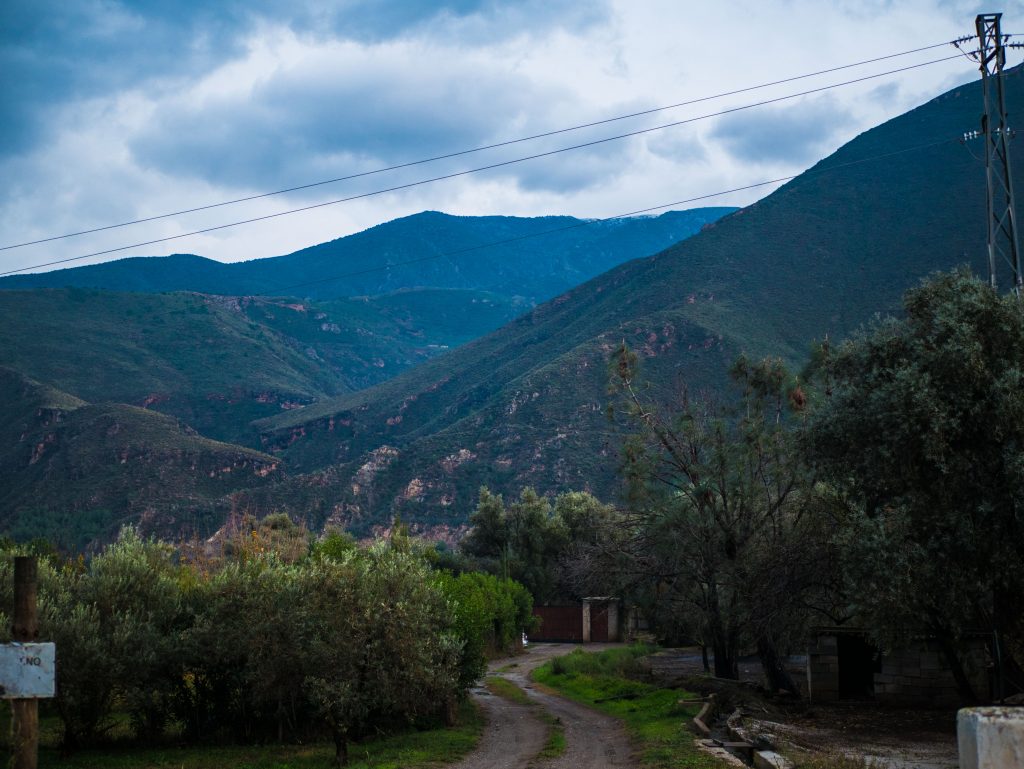 The serene view by the orange tree orchard. All rights reserved Soumaya Hamdi.

O our Sustainer! Thou hast not created this without meaning and purpose. Limitless art Thou in Thy glory!
Quran, Chapter 3:191.

Soumaya travelled through Andalucia with Ilim Tours, on their ‘Andalucia Muslim 6 Day Tour’. For more information check out their website.

We have launched a social media campaign to #OwnYourNarrative.

Our aim is to bring to light the lesser-known stories of Islam and Muslims in Europe.  These are stories that are given little to no coverage in mainstream European history books, and yet tell a very important narrative about Muslim societies that have lived in Europe dating as far back as the first century of Islam.

It’s time we took hold of our narrative. Join our cause by sharing your favourite Halal Travel Guide posts on your Facebook, Instagram and WhatsApp.