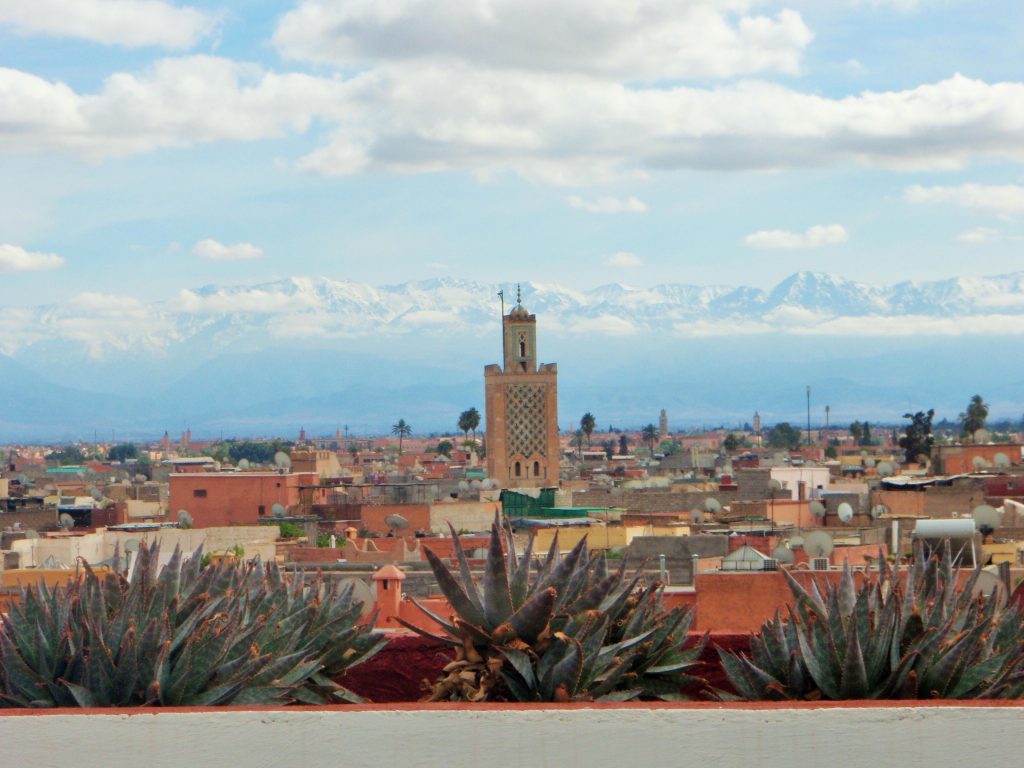 Standing on the roof terrace of ‘La Maison de la Photographie’ and looking out toward the majestic snowy peaks of the Atlas Mountains, looming like sentries over the city of Marrakech, I realised two things. First, that Morocco’s second oldest imperial city has not changed much over the centuries and second, that there are two levels of life in Marrakech; one that takes place on the ground and the other that exists on the flat roof terraces.

The gallery was inaugurated in 2009 and housed a collection of 8,000 original prints and postcards, within a building that encapsulates much of what makes Marrakech so enchanting. Its location is hidden behind one of the many unassuming Marrakechi doors in the medina within the northern quarter of the souk, and so it remains a relatively well kept secret to stumble upon.

‘La Maison de la Photographie’ charts the early journey of  photography in Morocco from the late 19th century through to the middle of the 20th century. The early pioneers of the art within the region first came to the gateway capital, Tangiers, before making their way through to Marrakech. These exquisite images captured the very essence of the country through the eyes and architecture of its citizens.

And so it was that these stills, hanging against stark white walls, allowed me to compare the city in the early 1900s with the present day. Very little has changed within the walled city. Sun-weathered faces peer from beneath traditional hooded robes or djallaba as they are known in Arabic. Beams of light pierce through the wooden slats of the covered souk, illuminating the labyrinthine warren of alleys of the old city. The only high-rise features of the cityscape are the square minarets, whose design can be traced back to the Ummayad rulers of Islamic Spain. During the call to prayer the roof terraces are without a doubt the place to be, as the first Imam sets off a domino effect that bounces from minaret to minaret across the city, engulfing the city in an aura of religious devotion.

The gallery is housed in an ancient Fondouk (the word ‘Funduk’ is still often used today for ‘hotel’ in Arabic). Whilst not representing the religious significance of a mosque nor the political importance of a Palace, the ‘Fondouks’ played an important role in the medieval market-life of the souk, helping to stimulate the passage of trade for passing caravans.  Today they are the workshops of artisans who dye leather, hammer metal work or serve as small bakeries.

From my perch on the terrace café of the gallery, I peered over a side railing to see a young Moroccan boy laying out rows of tanned leather hides upon the roof of the neighbouring tannery, to allow them to be dried by the sun, part of an age-old tradition. In the distance, the Katubia Mosque’s minaret is one of the greatest and oldest landmarks of the city, dating back to the 12th century and, thanks to old French colonial legislation (that no building in the medina should be above the height of a palm tree), provides the ideal reference point above the maze of the souk.

As with most fondouks and riads the footprint of the building is based around the central courtyard, beautifully tiled and featuring a central water fountain, both of which are open to the elements and allowed to interact with bright sunlight that funnels down into the central area. This cascade of light bounced off the glass-framed images adorning the gallery walls, creating a series of reflections placing the Zellij mosaic tiles and arabesque stained-glass windows of the building with these early ancestors. Whether by clever design or coincidence, this fusion was illuminating.

The maze of alleyways are the ventricles of the old city, where modern caravans of trade and life continue to pass through. The tightly packed stalls use every inch of available space to design, drape and display their wares; everything from ‘Babouche’ pointed slippers to ‘Fanous’ lanterns and leather bags, to antiques and perfumes. But the most eye-catching are the colourful rows of spice stalls offering a delicious array of fresh dates, almonds, pistachios, melon seeds, cumin, cinnamon and much more. The chequer boards of produce are piled high like pyramids, engulfing the vendor who pokes his head through a solitary gap between his mountainous local fare.

The contrast of aromas overlaps, mixes and changes as you move from one district to another, each area dedicated to specialising in a particular traditional craft.  The most distinctive smell emanates from the famous Tanneries district, located in the north-east of the medina just next to Rue de Bab Debbagh. The process of fermenting, colouring and drying the hides is a fascinating spectacle, but also one that requires a sprig of mint positioned strategically under the nose.

However puzzling the souk’s alleys may appear, they eventually lead to ‘Djemma El-Fna’ square, designated and considered by UNESCO as a ‘masterpiece of the oral and intangible heritage of humanity’. There can be no better description of the uniqueness of Marrakech’s famous central forum. It is of course the most visited part of the city by travellers, which in turn attracts those hoping to earn their share of the tourist’s dollar: snake charmers, dancers, tooth pullers and highly decorative water-sellers. As night falls and the food stalls move into prime position they become a hive of activity. Steam and smoke ascend into the night air against a soundtrack of the rhythmic drumming coming from the huddles of people crowding around performers. Locals and visitors sit down in the square’s alfresco setting for the renowned Tagines or Harira soup, which is a spicy blend of tomato, lentil and chickpeas.

The ochre-red city wall and ramparts, whose construction was commissioned by Ali ben Youssef around 1126, spreads a 10km protective arm around the medina and is punctuated by a series of ‘Babs’ (gates) linking the ancient medina and the relatively modern quarters of Hivernage and Gueliz, a legacy of early 20th century French governance. These 10m high walls also enclose everything that makes Marrakech so mystical and historical; the medina has inspired authors, artists and designers and continues to do so.

The ornate gates are symbolic in that they allow this flow between the old and the modern, influencing  new architectural styles and ideas. The Marrakech Bienniale, already more than ten years old, uses this inspirational city to promote art and contemporary culture in North Africa. So it seems natural for one of the most photogenic places in the world to be the home of MMPVA, expected to be one of the world’s biggest photography galleries. Marrakech is most definitely visualising the future.

Ramy Salameh flew with easyjet.com from Gatwick Airport and stayed at the Hôtel Le Naoura Marrakech (www.lucienbarriere.com) For more information go to visitmorocco.com.