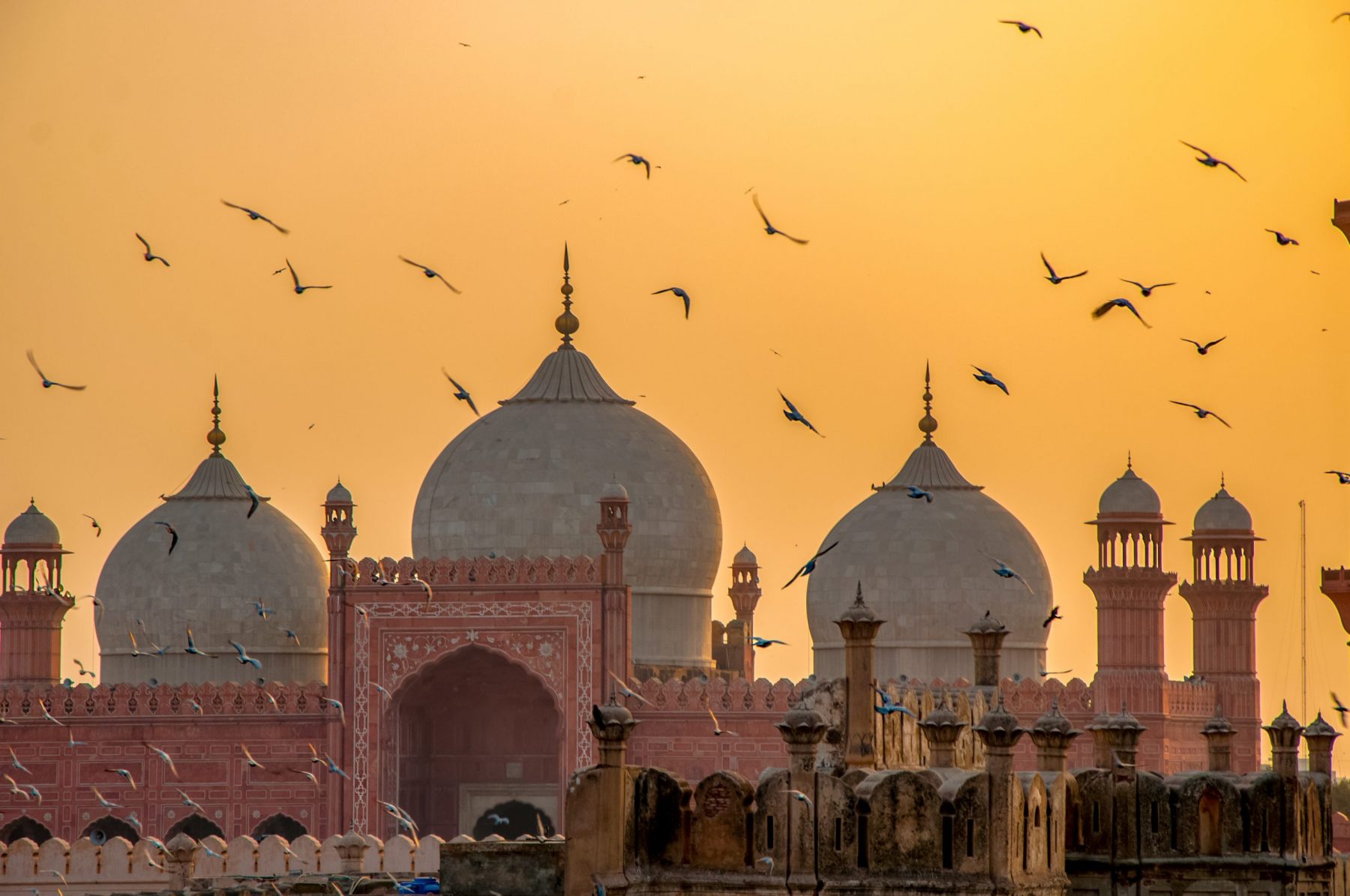 “Islamic architecture often alludes to the infinite power of God. The imposing structures of splendid domes, towering minarets and sprawling courtyards dwarf each and every visitor; a way of reflecting one’s own insignificance in the realm of God’s vast creation.”

During a recent holiday to Pakistan, I was struck by how definitively my trip was shaped and coloured by one city in particular. I had visited a few places during my stay, but none compared to the city whose very walls charted Pakistan’s long and colourful history through the ages; a patchwork city built and shaped by successive emperors of one of the greatest Empires to rule South Asia.

From the outset, Lahore is a city of wonders. The Old City, also known as the Walled City, is nestled in the very heart of Lahore and is inextricably tied to its Mughal past. Pakistan’s history is as rich as it is understated, and Lahore continues to be the beating heart of a country bursting at the seams with conquest, empire and legacy.

The Mughal Empire was an early-modern Islamic Empire, established by the charismatic and pioneering Babur in 1526. Babur was descended from both Timurlane and Genghis Khan, and represented a conjunction of the two most powerful dynasties in Central Asia. After losing Samarkand to his enemies, the exiled prince travelled South and won the First Battle of Paniput, securing his territory in India and laying the foundations of one of the greatest Empires in South Asian history.

Lahore flourished under Babur, and quickly became the grand capital of the Mughal Empire under Babur’s successors – each of whom left their mark on the city. One of the most famous being none other than Shah Jahan.

Shah Jahan was the fifth Mughal Emperor, whose reign represented the golden age of the Empire, and the height of Mughal architecture. Shah Jahan left behind a lasting legacy of monuments and structures – the most famous being the Taj Mahal in Agra – but there are a great many forgotten Mughal treasures still in Pakistan and Lahore itself. 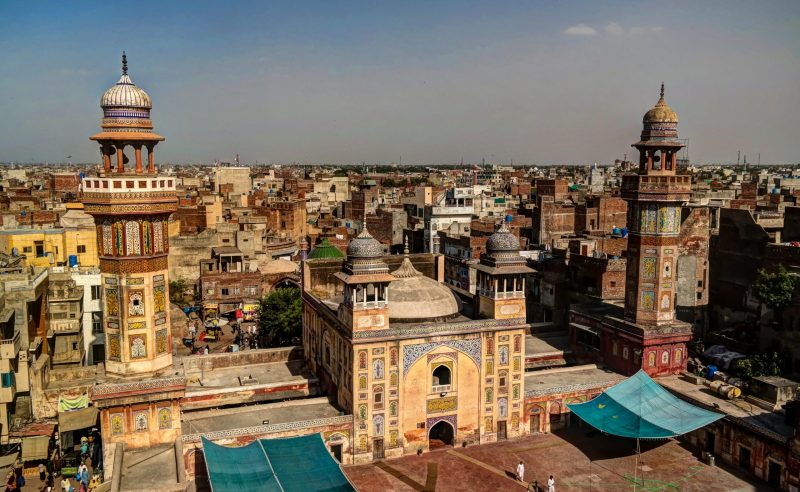 In the heart of Lahore’s marketplace complex lies the Wazir Khan Mosque – one of the most ornately decorated Mosques of the Mughal Era. I had been told of the splendour of the mosque, but as we wound our way through narrow alleys and bustling market rows, I could not have anticipated what lay ahead. Commissioned by Shah Jahan, the mosque is famous for its extensive and ornate tile-work and embellishments. Entering the dusty courtyard, each wall of the mosque is adorned with ceramic tiles, calligraphy and colourful frescoes. Every corner throws the geometric artistry of the building into sharp relief; oriental arches, domed ceilings and panelled walls segment the mosque, turning it into a mosaic of Mughal motifs. Seeing the magnificence and splendour bursting from every surface, it is an eternal surprise that the Wazir Khan Mosque is not better known as a prime example of the height of Mughal power and extravagance.

“Shah Jahan left behind a lasting legacy of monuments and structures – the most famous being the Taj Mahal in Agra – but there are a great many forgotten Mughal treasures still in Pakistan and Lahore itself.”

Another string of Lahore’s most stunning monuments find themselves within walking distance of each other at the Lahore fort, and showcase the journey of the city through successive Mughal rulers. The Lahore Fort forms an enclosure which circles the Badshahi Mosque, Roshnai Gate and the Hazuri Bagh as well as the Samadhi of Ranjit Singh. The fort itself is a beautiful complex of hidden gems and houses some of the lasting remnants of Mughal splendour. 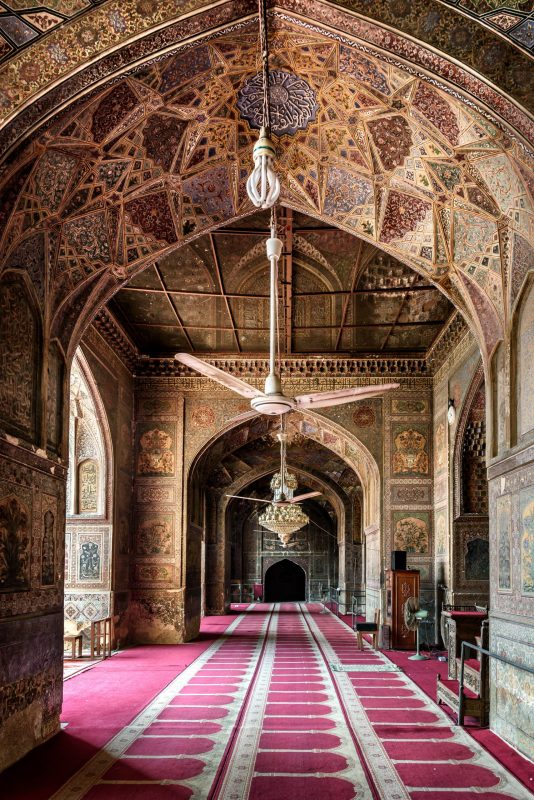 Each successive ruler seems to have made his mark on the site: The Akbari gate, Jahangir’s Picture Wall, Shah Jahan’s Sheesh Mahal and Aurangzeb’s Alamgiri Gate are the most notable among the hidden gems of the site. The constantly evolving nature of the Mughal Empire can be traced through their additions to the fort. Akbar’s pioneering syncretic reign as the third Mughal Emperor is reflected in the fusion of Islamic and Hindu motifs in the Akbari Gate and the Elephant Path. Shah Jahan’s Sheesh Mahal (Palace of Mirrors) is in-keeping with the indulgent magnificence of his reign; the walls studded with tiny facets of mirrored glass and precious stones. Shah Jahan was known for his legacy of unparalleled grandeur and beauty, and seeing the splendour of such a decadent hall first-hand breathes life into the memory of the Kings which once walked the Lahore Fort.

Contrastingly, the more imposingly Islamic structures of the fort were built under Aurangzeb, the sixth Mughal Emperor, who is often characterised as a more conservative ruler who openly asserted his Islamic identity – the most important of which is the Badshahi Mosque. 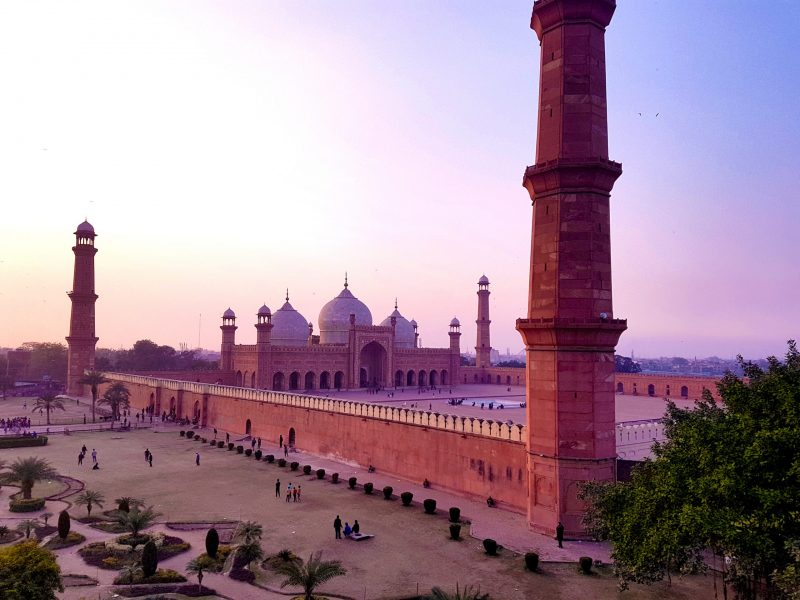 The Badshahi Mosque in all it’s splendour. Photo: Muhammad

The Badshahi Mosque was undoubtedly the most spectacular sight at Lahore Fort by far. After removing my shoes at the steps, I was propelled through the gate by the sea of warm bodies pushing me through the archway. It was approaching dusk, and as I stepped into the courtyard, the marble warm beneath my bare feet, I found myself lost for words. Badshahi Mosque was built by Emperor Aurangzeb in 1671. Hewn from a combination of red sandstone and marble inlay in a staggering two years, it was the single largest mosque built during the Mughal Era, and up until recently, the largest mosque in Pakistan. None of these facts, however, can prepare you for seeing it in person. Islamic architecture often alludes to the infinite power of God. The imposing structures of splendid domes, towering minarets and sprawling courtyards dwarf each and every visitor; a way of reflecting one’s own insignificance in the realm of God’s vast creation..

There is nowhere that is quite capable of putting you in your place quite like this mosque. Badshahi Mosque is matchless in sheer impact; walking through that gate was a religious experience unlike any I have experienced before, and the memory of hearing the adhan echo through the courtyard and into twilight in such an awe-inspiring structure remains with me to this day. 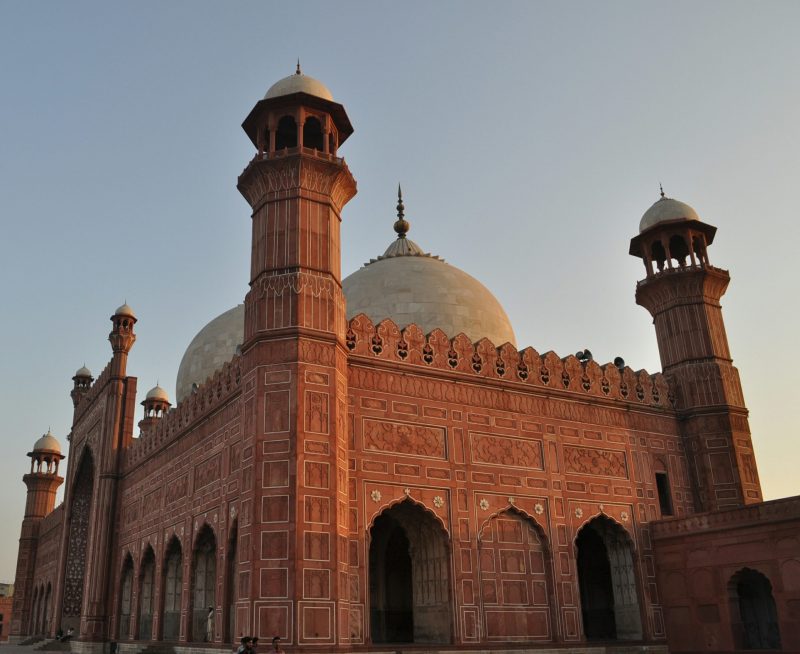 Long before The Partition in 1947, the regions of present-day India, Pakistan and Bangladesh were encompassed by the great Mughal Empire for over 300 years. Though anti-Muslim nationalism pervades present-day thinking across a large portion of the Asian subcontinent, the vast, breathtaking monuments left to us by the Mughals stand tall as a reminder of the wealth, civilisation and heritage brought to the region by their Muslim rulers.

As we drove away from Lahore, I was gripped with a newfound love of Pakistan. Walking through the city and visiting its monuments, I got the distinct impression that the city was haunted by the ghosts of Emperors past. As a city where kings once roamed, there is no shortage of grandeur or pomp in Lahore, and the features of the Old City evoke the sense of a story being told in a series of intersecting monuments. A walk through Old Lahore is a journey through its history, as a city that changed hands through the centuries. As a tourist walking in the footsteps of the Kings who built the city, it is no surprise that there is a unique sense of nostalgia that engulfs the entire city. Like the successive reigns of Mughal Emperors who each left their mark on the city, Lahore has become the sum of its parts. A painting of many colours; a mosaic of many tiles; a patchwork of many threads.

Ultimately, the true history, culture and identity of Pakistan is elusive, exciting and well worth exploring – and if you were to seek it out, I am willing to bet you would find it somewhere behind the dusty city walls of Old Lahore, city of kings.

Maryam Khalil is a British Pakistani history graduate with a love of reading, writing and travelling – sometimes all at once! Jack of all trades, master of none. In her own words, “I read anything and everything, and then cheerfully criticise the movie adaptation. In the words of Albert Einstein ‘I have no special talent; I am only passionately curious’.”

Enjoyed reading this article? Read more of Maryam’s travel experiences as she explores the Pearl of the Persian Gulf, Qatar.