After a gruelling 8 hours of travel (over land, air, sea and more land), me and my travel buddy SH arrived in the bustling centre of Sultanahmet, Istanbul. It was loud, it was busy and every local we asked for directions sent us in the opposite direction to the last. Having finally navigated our way through the labyrinth of cobbled streets, we arrived at our hotel which was a stone’s throw away from the famous Blue Mosque. 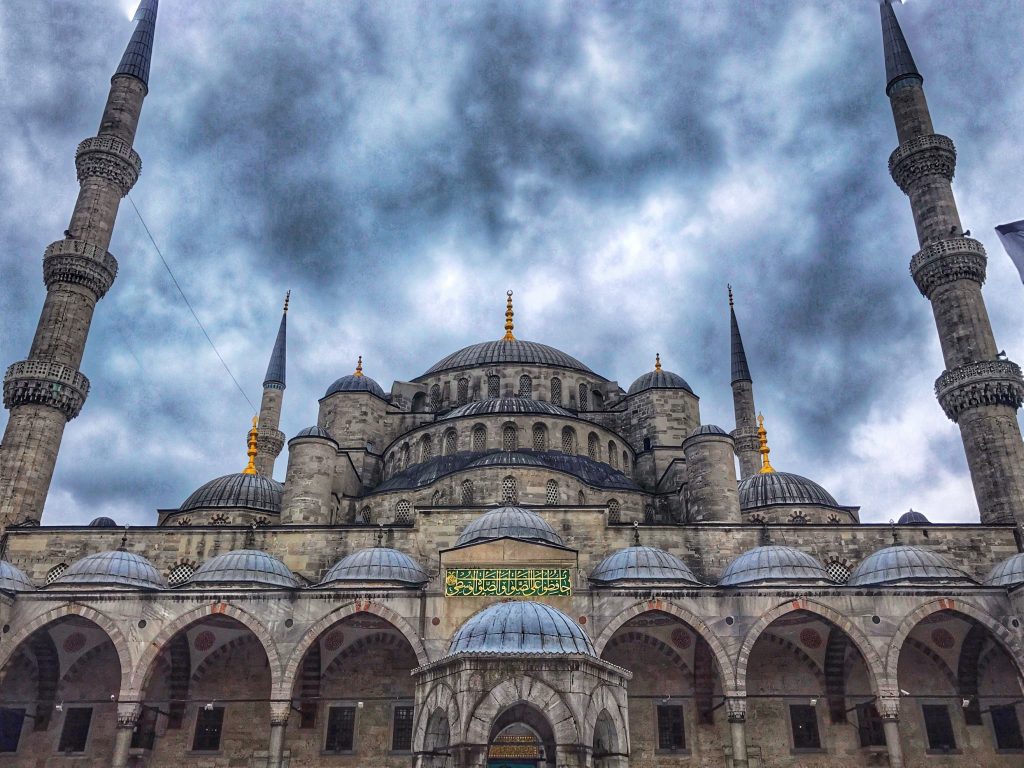 After a long lie-down and several restorative cups of tea, we ventured back out into the centre of Sultanahmet with the main aim of finding something  to eat.  With our hunger getting the better of us we didn’t venture far and ate at one of the first restaurants we saw, filling ourselves up on the classic combination of grilled chicken and kebabs. The food was mediocre at best and honestly, I’ve had better on Edgware Road. However, we strongly suspected that the lack of originality was more down to restaurant choice rather than a reflection of Istanbul’s cuisine and were determined to find better the next day. 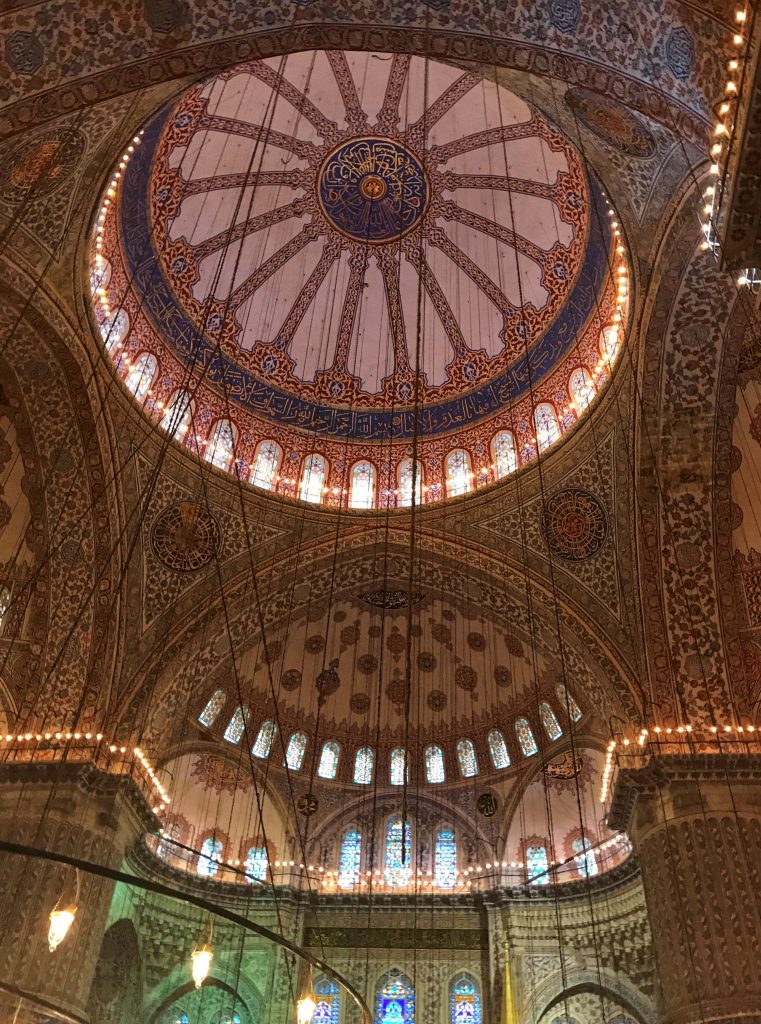 The interior of the Blue Mosque is lined with more than 20,000 handmade İznik style ceramic tiles. Photo credit: Maryam Tidjani

The following day was Friday, and we were both keen to pray Jumu’ah prayers at Sultanahmet Camii, AKA the Blue Mosque.  The Blue Mosque is the modern archetype of Istanbul and for good reason; it and every other mosque we visited are beautifully designed, with intricate geometric patterns and Arabic calligraphy adorning the walls, chandeliers hanging down from endlessly high ceilings and more minarets than the eye can see. The photo opportunities were endless, but as it was prayer time photography was not permitted- which on reflection was probably wise as it gave us a chance to actually focus on our prayers!

Travel itinerary in hand, our next stop was the Hagia Sofia. This 1500-year-old Greek Orthodox basilica turned imperial mosque is famous for its Byzantine architecture and is now open as a museum for the public to view. With a long history stretching over a millennium and a half, restorations to the building were made by Sultan Abdelmecid in 1847, which included the addition of Islamic Arabic inscriptions on huge black placards. The juxtaposition of having Christian and Islamic art side by side meant the building felt like both a church and a mosque, which is something I have never experienced before. Historical information was available throughout, which was great for anyone who decided to opt out of a guided tour to peruse at their own pace. There was even a small cinema area where a video subtitled in English went into greater detail about the period architecture and design of the building. I am a huge fan of watching documentaries so was happy to sit there until the very end, however I was shuffled out by SH (who does not share the same passions) to our next destination: Kadikoy. 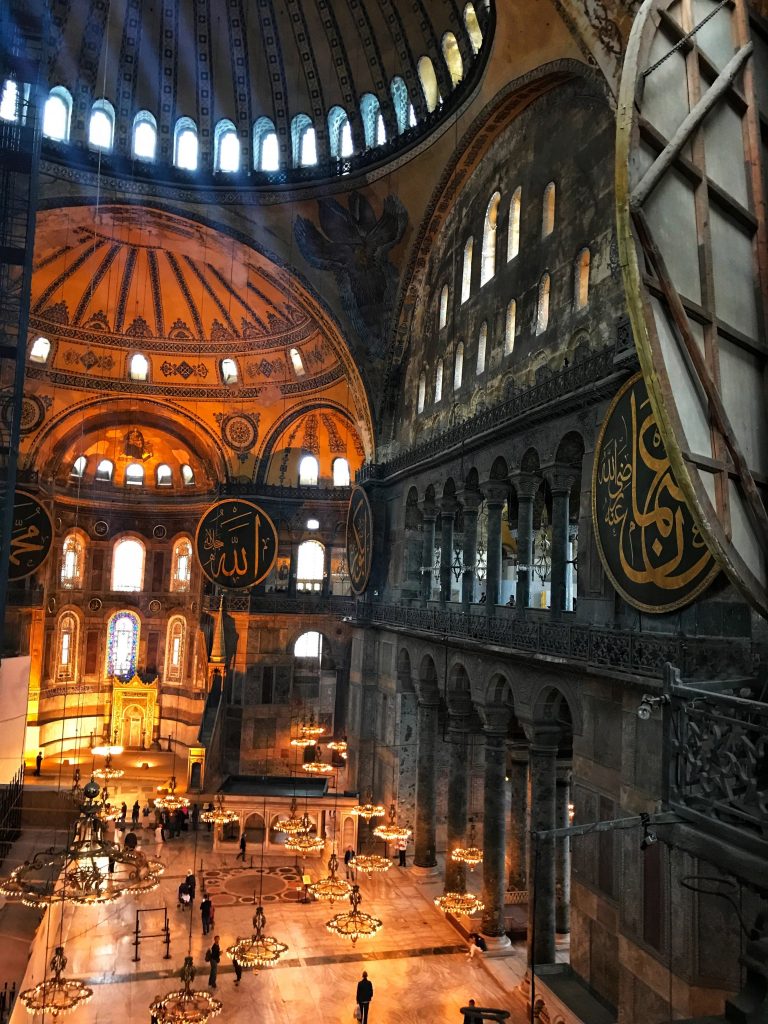 The atmosphere inside the Hagia Sophia is just as majestic as the building. Photo credit: Maryam Tidjani

And we travelled from Europe to Asia for a kebab…

We boarded a tram at Sultanahmet station and 3 short stops later were in the port-town of Eminonu. Eminonu plays a key role in connecting the European and Asian sides of Istanbul by way of a twenty-minute ferry. I should mention that to travel anywhere in Istanbul by public transport you need to buy an Istanbulkart, which is similar to London’s oyster card. It is an extremely cheap (around 80p a journey) and efficient way to get around Istanbul by way of ferry, tram or train. We took a ferry from Eminonu to Kadikoy to explore the town there and, (more importantly), sample the famous Iskender Kebab from Iskender Oglu that SH’s husband had highly recommended.

Finally, the delicious Turkish cuisine we had been waiting for! The perfectly seasoned cuts of grilled lamb and beef sit on a rich tomato base and are smothered in hot butter by the waiter in front of you. Served simply with a side of yoghurt, what makes this place so great is that you can order half portions to top up on if (and when) you want more but can’t manage another whole portion. It was well worth the commute- and the calories.

We managed to squeeze in a late trip to Galata tower and Taksim Square. Galata Tower, a medieval stone structure, offers panoramic views of the Golden Horn, which unfortunately we were too late to go up and enjoy. Taksim square is comprised of a long road of shops, not dissimilar to London’s Oxford Street. A shopping and dining district, any consumerist would be satisfied spending an afternoon here. 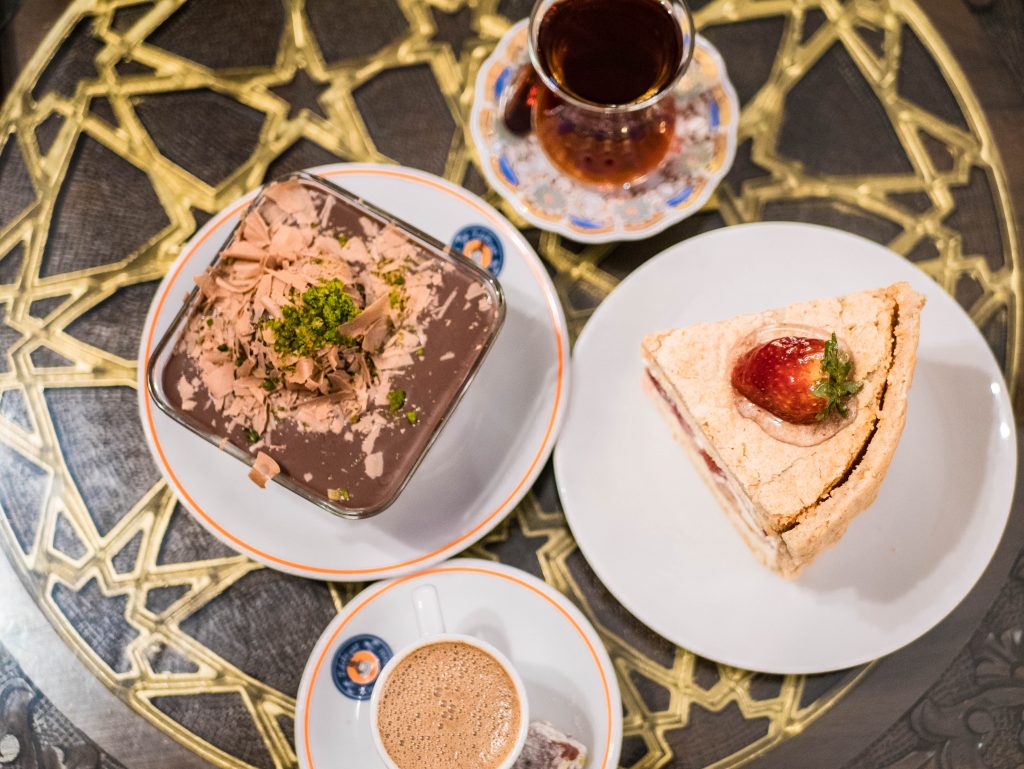 We ended the day in a cosy Hafiz Mustafa, a famous dessert chain in Turkey. After loading up on Ottoman coffee, kunefe and several plates of baklava we ended the day very satisfied and very full.

The next day, I was informed by SH that we had barely scratched the surface of Istanbul and needed to squeeze in two days’ worth of itinerary into one. Ever up for a challenge, we set off at what felt like dawn (which was realistically more like 10 am) and started our day in the Museum of Turkish and Islamic Arts in Sultanahmet. Here resides an abundance of information covering the different periods of Islamic history, spanning all the way from the start of modern Islam; the era of the Prophet Muhammed (peace be upon him) in 609 AD. Each era was represented with a Quran from the same period, starting off with the stone tablets used by the companions of the prophet to the intricately designed covers during the Ottoman era. For me, it instilled a deep sense of pride in my Islamic heritage, which was at its height of excellence in the sciences and arts during the Middle Ages. 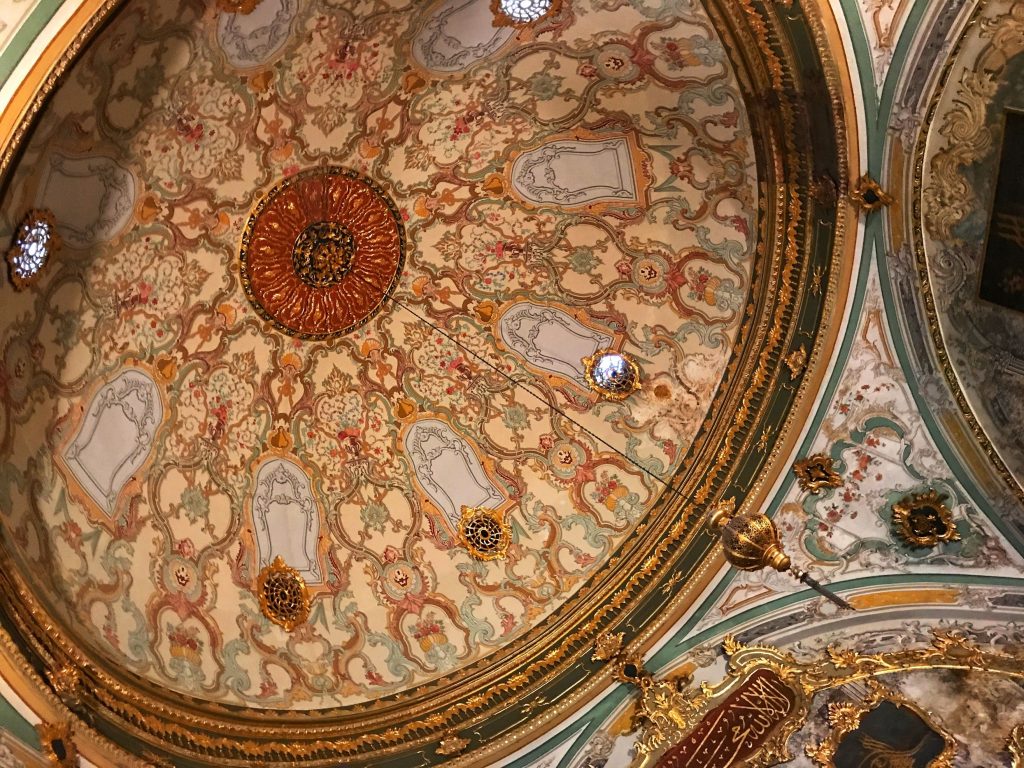 Next on the list was a trip to Topkapi palace, which was commissioned by Mehmet the Conqueror in 1459 and has housed many a sultan since. The Chamber of the Holy Relics, located within the Privy Room, contains religious objects sent to the Ottoman sultans over hundreds of years. The Prophet’s sword and those of his companions are housed here, along with the staff of Moses and the sword of David, and many more relics belonging to the prophet’s family. You can also buy separate tickets to visit the palace Harem, where the women in the royal family (including the concubines) would reside. This was of particular interest to me, as it was the home of the infamous Roxelana, the Slavic chief consort turned-wife of Sultan Suleyman. She was the most powerful and influential wife of the Sultan, later persuading him to execute his oldest son (from his first wife), thereby placing her own son next in line for power. If you are unfamiliar with the story, it is well worth a read.

A true testament to the splendour of Ottoman architecture and Islamic heritage, a half-day visit to Topkapi Palace is a must if visiting Istanbul for the first time. 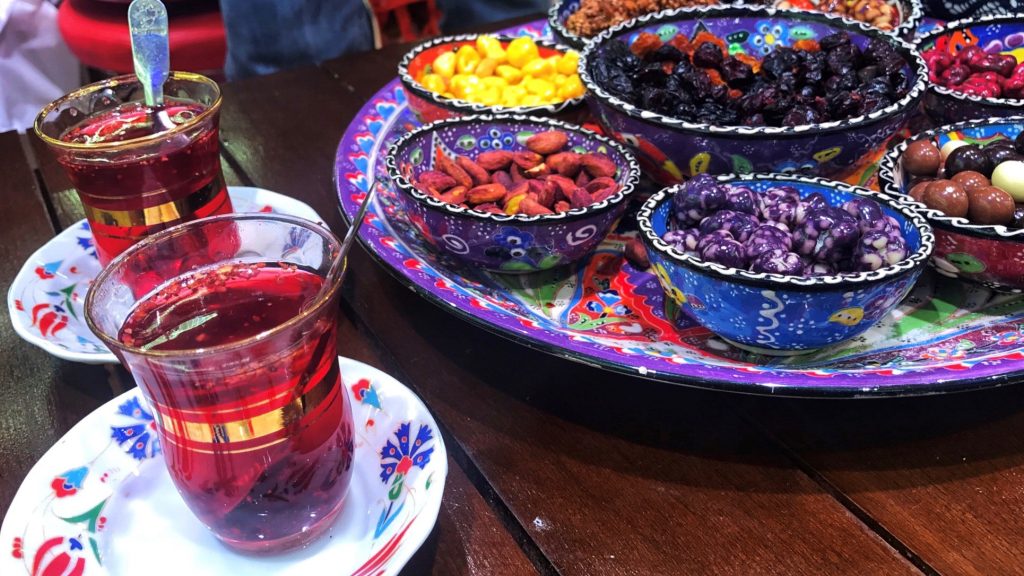 Next stop was the Grand Bazaar, which by itself demands an entire afternoon to be fully appreciated. An indoor expanse of market stalls and shops, countless Turkish treasures can be found here; customary clay and quartz pottery; exquisite tapestries and upholstery; heaven-scented cosmetics and soaps… We naturally found ourselves drawn to the food quarter and ended up spending a considerable amount of time (and £££) on speciality Turkish Delight. Turkish hospitality at its finest, we were ushered in, sat down and besieged with samples of various treats and teas inside a beautiful shop called Sehri Sarayi. 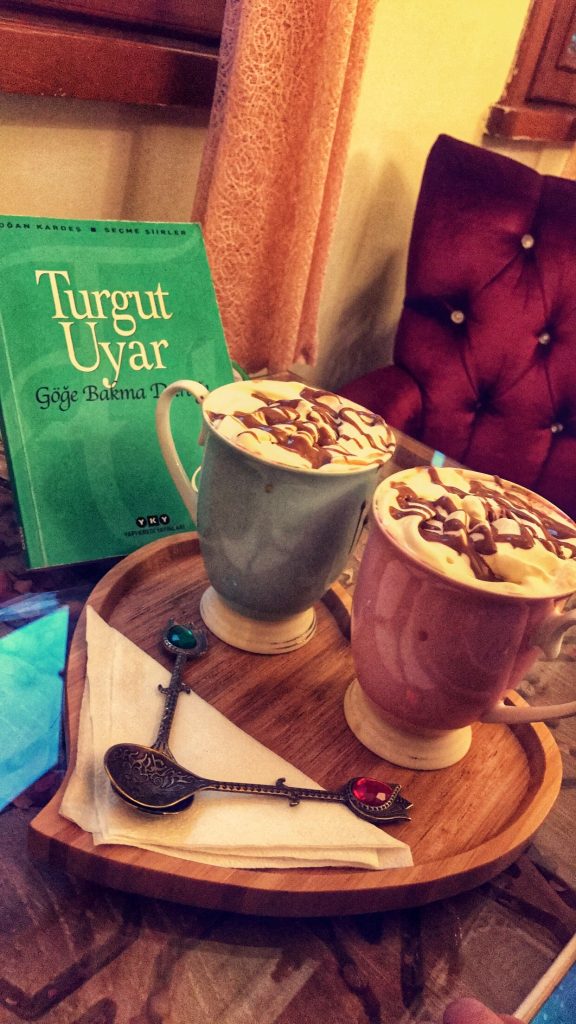 Our final stop was Suleymaniye masjid, the largest mosque in Istanbul. Another truly magnificent cross between Byzantine and Ottoman architecture, Sultan Suleyman commissioned the building of this mosque in 1550 AD. To this day, his remains lay here entombed alongside his wife Roxelana. With courtyards surrounding the mosque, it is perfect for an afternoon stroll – providing good weather. Unfortunately for us, the skies opened up and the downpour was relentless. Soaked through to the bone, we started to make our way back to the train station. By chance, we stumbled upon the very quaint and cosy Suleymaniye Cikolatacisi, which serves the most delicious melted hot chocolate I have ever tasted. Complete with fresh cream and more melted chocolate, nothing could have been more soothing to a sodden pair of travellers. Best of all, the menu was printed inside old Turkish poetry books, which would satisfy even the most hipster of Instagram pages.

Having come to the end of our short stay in Istanbul with so much left to explore, both SH and I couldn’t help but feel disappointed that we weren’t able to see more. With its stunning skyline, Istanbul is truly an unforgettable city, and I definitely plan on returning to discover more of its rich history (and delicious food!).

Maryam is an optometrist by day and a travel blogger by night. When she isn’t testing the British population’s vision she can probably be found in the local coffee shop, sampling her third mocha of the day. Best travel experiences so far? Kayaking on Loch Awe and flying in a hot air balloon over Cappadocia.
Follow Maryam on Instagram: GirlwiththePinkHijab


Have you checked out our handy tips on booking your trip to Turkey?