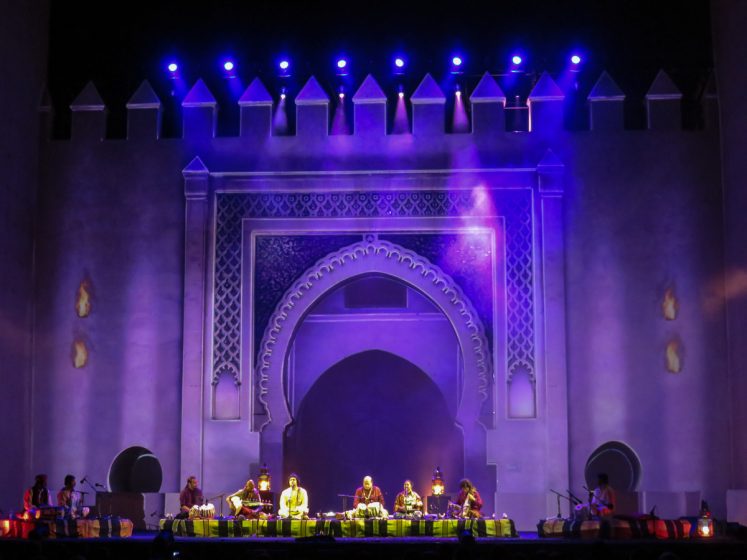 Fez, the fabled city of the Maghreb and its ancient landmarks, was the perfect stage for ‘The World Sacred Music Festival’; now in its 22nd year the festival is intricately interwoven with one of Morocco’s great imperial cities. The cultural cross-pollination of sacred music and artists from around the world continues to engender the original ideals for which the festival began; peace, harmony and understanding through the language of music.

This year the theme “Women Founders” paid tribute to Moroccan women who have left their mark on history. Delve into the light and shade of the medina’s maze of alleyways and it will lead to Morocco’s first University, the Karaouine, founded by Fatima El Fihriya as a centre for Islamic education and religious study, and has been the beacon of the spiritual capital of Morocco since the middle ages. Another prominent figure was Kenza El Awrabiya the wife of Moulay Idriss, who helped secure unification between the Amazigh people and the Arabs.

The series of concerts began with “A sky full of stars”, bringing together a collection of stories from ‘A Thousand and One Nights’ from the Golden Islamic Age, transporting me into a magical night of music and dance, led by Scheherazade who framed the tales. Each female artist represented a different story, through the music, dance and poetry of countries across the Islamic world and beyond. Our evening became a totally immersive adventure beautifully projected against the walls, ramparts and gate of ‘Bab al Makina’.

For the first time in the Festival’s history, a new concept to highlight one particular country was introduced and homage was paid to the musical genius of India, the origin of many of the stories of ‘A Thousand and One Nights. The flamboyance, extravagance and colour found in the courts of the Maharajahs and Nabobs was recreated once again upon Bab al Makina. Amongst the many performers, the north Indian ‘Kathak Ensemble’ dancers, showered the stage with rose petals as they pirouetted with perfect balance courting their audience with every spin and ‘Chota Divana’, the little princes of Rajasthan captivated with their vocal range, their voices filling the vast parade ground in which we were seated.

As a backdrop, the city of Fez, and particularly Fez el Bali home to the worlds’ oldest and continually inhabited medieval medina, plays its own distinct melody with the rhythms of daily life providing the link, the staging and inspiration for much of the festival. It is these sounds and sights that were to resonate most deeply with me.

A sense of timelessness imbues the ancient medina, as soon as you step beneath the Islamic arch of Bab Bajloud, one of fourteen gates that punctuate the ten miles of saffron coloured walls and ramparts. Bab Bajloud was only built in 1913, but what draws attention to it, is the delicate arabesque and knot work ornamentations across the blue tiled façade. These mesmeric tiles are known as Zillij and are an intrinsic part of Moroccan architecture with Fez being the spiritual home of the art. Throughout the city Zillij tiles can be found adorning public buildings, fountains and local residences, something of a social necessity regardless of wealth.

It was within the tumult and colour that courses through the sun dappled ventricles of the medina that the finest and oldest examples of the art can be admired, none more so than Madrassa Al Atterine, built in 1346 under the Merinid dynasty.

Zillij, meaning mosaic tile, is work of great artisanal skill by craftsman known as Zleyjis, but when they are placed upon the walls of a religious school dating back centuries, they become art of meditative beauty and awe-inspiring complexity. Inside the Madrassa the rhythmic linear patterns of scrolling and interlacing cursive writing that dressed these ancient scholastic walls, must have entranced and inspired students as they stepped within the inner sanctum of the school.

The 17th century Nejjarine fountain in Place Nejjarine, which still offers water to passers-by, is another landmark that owes its beauty to generations of master Zleyji craftsman. Patterns of radiating stars enclosed within an Islamic arch, demanded my attention like a firework display across a night sky.

Fez el Bali has been a UNESCO World heritage site since 1981 and continues to undergo an ambitious programme of restoration. The Nejjarine ensemble, including the fountain, woodworker’s suq and funduq was an early recipient to benefit from the medina’s UNESCO status.

The funduq, a former market area has been sensitively restored and now houses a 51-room museum containing the vestiges of a bygone epoch that keeps alive the memory of traditional woodworking skills that are evident in the most cherished buildings of Fez. Set around a large courtyard, rising three stories with delicate cedar wood balustrades on each level, that sit on sculpted white plaster columns, was reason enough to enter.

Returning to the sinuous passageways, the unrelenting tempo of foot traffic pushed and cajoled me around several corners, making way for the clip clop of hooves from passing pack mules or young traders with carts loaded high, loudly announced their right to move ahead. At times this made it hard to stop and peer through doorways, which invariably opened into a cloistered space of contemplation or tranquillity that the medina’s walls have always shielded.

One such door that opened briefly was that of the Karouine Mosque. As a non-Muslim, this was the only chance to glimpse the main courtyard and the ablution fountain surrounded by a checkerboard of coloured floor tiles that eventually reached the sanctity of the ‘mirhab’ beyond.

This was the legacy that Fatima El Fihriya left the city of Fez in 859 and the reason she was being honoured in this year’s sacred music festival. It was not only the mosque she founded but also the neighbouring Karouine University and Islamic library, which in its day attracted eminent thinkers and scholars from across the region. Today, it still contains a priceless collection of books that have survived in part by being bound and covered in the finest leather from the local tanneries whose processes have changed little in centuries.

The newly restored Islamic library ironically sits within the metalworker’s Suq Seffarine; a constant clatter of tapping and hammering that reminds everyone that this is a place of work and commerce, as well as a learned and artistic city. All have their place within the medina.

In its own way, the World Sacred Music Festival contributes to Fez’s journey of preservation and regeneration through enhancing the city’s cultural renaissance. After more than two decades, the festival is an intrinsic part in Fez’s rhythm of life that is both historic, authentic and why UNESCO made the protection of Fez a duty devolving upon the whole of mankind.

For more information about Fez and Morocco go to visitmorocco.com.