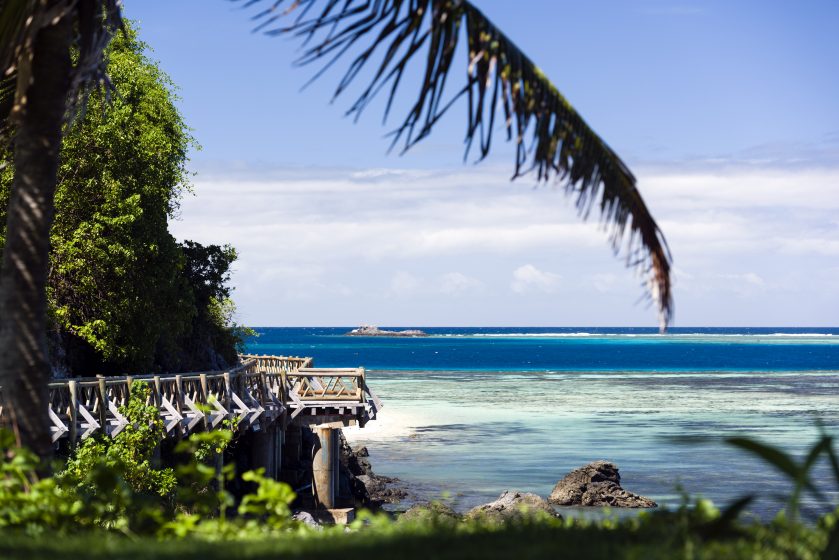 How reassuring that for once the brochure doesn’t lie! Nor do the images need airbrushing.  I was being granted a rare treat, not a mere holiday. Fiji comprises over three hundred islands (of which a hundred are populated). The mountain ranges are beckoning and green-topped, the waters crystalline, and the sand truly white.

It’s true that for a European it’s a long, long way but the pressure is off instantly on landing. The airport and marina are fabulously near to each other. I went on a cruise, the “Blue Lagoon” and it was as restful and energetic as I felt inclined. When effortlessly on the move there is a definite passive beauty in viewing the shorelines and passing gently the static land.

Cruises may not be for everyone. It is not just ‘plain sailing’. There is always something to feast upon. I stopped at different spots regularly enough to make each day new. The setting for each dinner is different and imaginatively conceived.

Robert Louis Stevenson, on his travels in the Pacific, hated the sea and liked islands. He wrote in 1888 that sailing the sea was “stupefying to the mind and poisonous to the temper…but you are amply repaid when you sight an island, and drop anchor in a new world”.

Yes, this Yasawa Island group, around twenty in all and volcanic in origin, is properly remote, accessible only by a handful of options. It looks out over Bligh Water, named after William Bligh, Captain Cook’s first mate. It’s also famous as the location for the filming of both Blue Lagoon versions (the 1948 Black and White one starring Jean Simmons and the more recent one with Brooke Shields). And yet, miraculously, they remain unspoilt and innocent.

The advantage of being bespoke and boutique is that things are small enough to be informal. On Blue Lagoon’s own private beach on Nanuya Island the size of the vessel allowed us to get so close as to be tied up to a coconut tree. The rotund and jolly captain somehow maintained his authority, with his self-detrimental joke “the more you eat, the more you float”, while joining in the spontaneous swim ashore as we suddenly all felt a need to cool down.

It makes a real difference that most of the crew come from the Islands and know the villagers. It gave me a special chance to meet them in a respectful way and not as a ‘human safari’. With their natural grace and dignity they do things in “Fiji time” with endearing patience, song and dance.

I got off the vessel to meet the English teacher at the village school at Yasawa.  Alfred, perspiring from sporting his tie. Alfred also runs the library which houses copies of Hamlet and Julius Caesar but no art books to show Paul Gauguin’s work, a much more vital and fitting connection between European and Oceanic values. They were stunned as they recognised many of the themes Google Images offered of his paintings.

I went on a shortened version of the seven-day tour. I stayed on afterwards to make more of my visit to Fiji. I went to visit the wonderful Matamanoa, a deluxe resort, perfect for honeymooners as soon became apparent. It offered a delightful aspect upon the nearby Modriki Island, the setting for Tom Hanks’ Castaway, with the hillock where he buried Wilson, and I returned to the mainland to take in the breathtaking scents of the orchid gardens started by the late Raymond Burr of both Perry Mason and Ironside fame.

At last, I got a chance to recreate my own desert island experience. Like mad dogs and the Englishman I am, I walked around one island and swam the circle around another. I had the place to myself alongside a myriad of little creatures. Snorkelling is the best way to enjoy them especially in and amongst these renown soft coral spots. I had a hat and some water and of course underestimated the distance and the heat. Nothing that a drop of iodine and tea tree oil couldn’t restore.

Fiji benefits from tourism, exporting sugar, tuna, gold even but is prey to Chinese commerce which is going to sleight the island with a casino, a neon-lit environment currently only seen at the airport and the Indian shops.  The land is 10% freehold and 82% native land (ruled by the chiefs known as i Taukei). The remainder is owned by the state, formerly by the crown. Andrew summed it up: “During Colonial times when sugar was king, Fiji was governed by Britain, educated by New Zealanders and owned by Australians”. Andrew explained further about Fiji’s recent inheritance: “In 1970 Harold Wilson decided to get rid of the island, both from costs and left wing sentiment towards independence. In 1993 television came in and was a positive influence as it meant people were more careful about saving up for things advertised”.

British Colonialism has left its mark with hymn and psalm plaques in the Methodist churches. I bought a copy of the Fijian to English dictionary. Cobo – to clap the hands crosswise, so as to make a hollow sound – was something I had witnessed as part of a ceremonial act. Tele – to paint with lime the eyes of a pig so as to blind it, preventing it thus from spoiling gardens – was luckily not. Paradise is everywhere though one could argue that God got it wrong allowing onto the islands the odd mosquito.

As for the people, Fijians are stockily built, with a strong sense of identity, the village group more important than the individual. For a man coming back from abroad it is the news of any children newly born that matters most. They don’t worry about provisions: the land is so bountiful and the village chief simply summons one of his tribe to perform their fishing duties, if that is what’s wanted for their evening meal… Fijian villagers are self-sufficient. They need only import from overseas kerosene, outboard motors, corrugated iron roofs, fuel, and fish hooks.”

I shall at least dream forever of returning, boosted by being sent on my way by a flattering, humbling turn out of staff to sing their personalized “Isa Lei”, the famous departure song:

Isa, Isa you are my only treasure

Must you leave me, so lonely and forsaken?
As the roses will miss the sun at dawn,
Every moment my heart for you is yearning.