If you’re a history buff or culture vulture, you probably already know that you’ll find centuries’ worth of well-preserved Ottoman Islamic history in Bosnia.

Bosnia’s capital city, Sarajevo, was once one of the most prosperous cities in the Ottoman Empire. The rising social and economic standards that came with the Ottomans attracted not only Muslims from other regions but also Christians and Jews. Thus, they settled and lived together harmoniously. As a result, Sarajevo became known as ‘The Jerusalem of Europe’ for this reason. To this day, is the only major city in Europe to house a mosque, synagogue, Catholic church and Orthodox church together in the same neighbourhood.

For centuries, people from the three Abrahamic religions lived together side by side. Unfortunately, most people remember Bosnia today not for its rich heritage and history of religious tolerance, but for the brutal ’90s war. Most of the heritage sites on this list suffered from deliberate shelling by Serb or Croat forces during the war.

Today, it’s possible to visit and explore Bosnia safely. You can find the wealth of Ottoman heritage sites in some areas across the country. Most of them have gone through restoration and repair work.

Here are ten Islamic heritage sites that you can add to your trip itinerary to Bosnia: 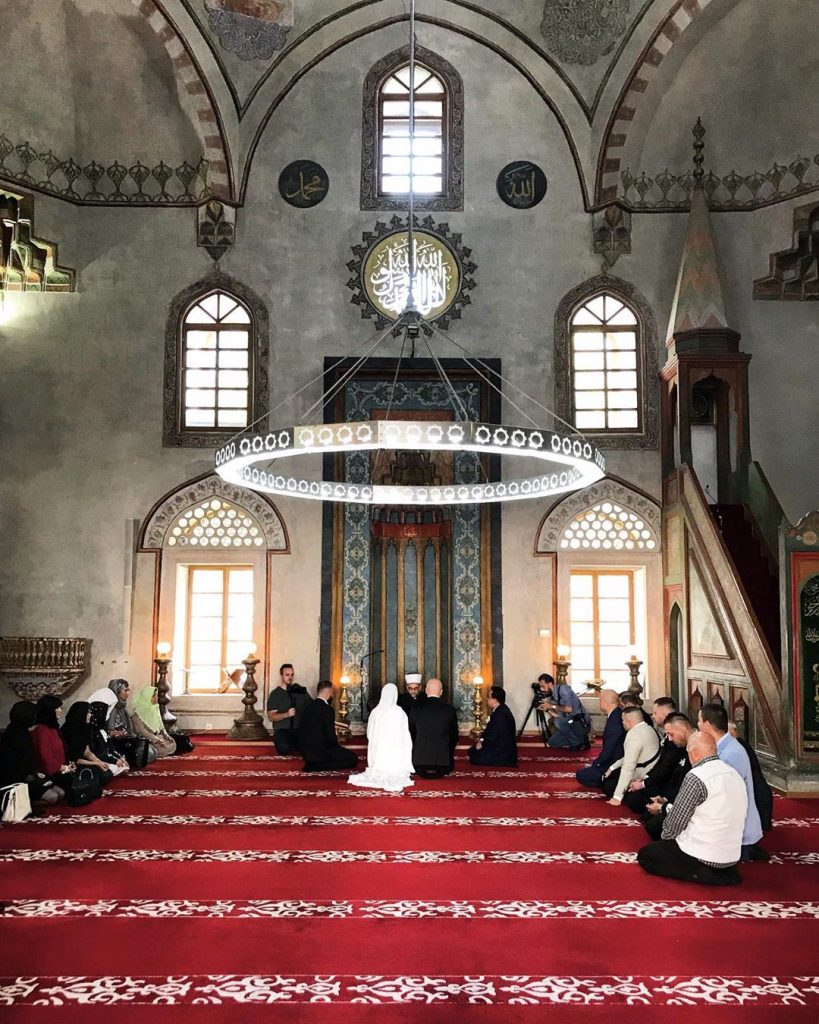 A wedding taking place inside The Emperor’s mosque. Photo: Salik_Photography/Instagram

Built by the Ottoman Empire’s first governor of Bosnia, Isa-beg Isakovic, the Emperor’s mosque was initially built in honour of Sultan Mehmet al Fatih’s successful conquest of Bosnia in 1463. Isa-Beg Isakovic was a nobleman who founded the city of Sarajevo and gave it its name. A fire destroyed the original mosque. However, in the 16th Century, they built the mosque again. At that time, it was dedicated to another Sultan; Sultan Sulayman al Qanuni – also known as Suleyman the Magnificent.

Furthermore, the name of the architect is unknown, though, many people believe that the architect was Mimar Sinan. He was one of the most famous architects not just throughout Ottoman history, but across Islamic history. Born to Christian parents, Sinan converted to Islam and dedicated his life to serving the Ottoman royal house. He was the genius behind many of the beautiful Ottoman mosques throughout Istanbul. 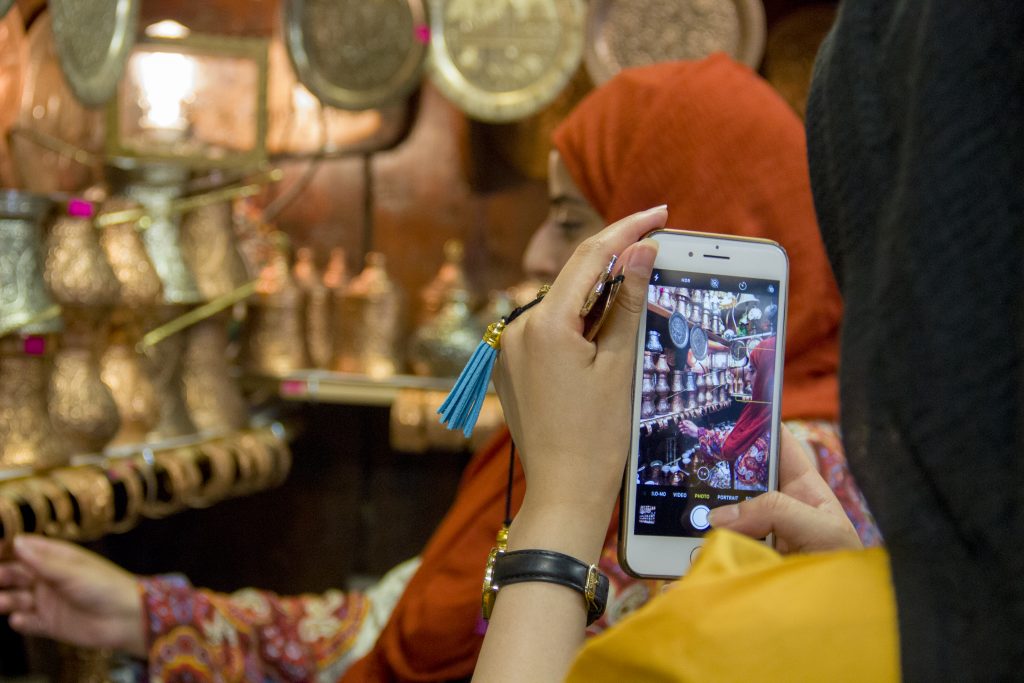 Exploring the Bascarsija will reveal many welcome surprises in the form of artisanal produce. Photo: Belma Art

The Baščaršija is the heart of Sarajevo’s Old Town and a beautiful example of Ottoman Islamic history in Bosnia. Home to some of the best shopping and traditional dining establishments in the city, a visit here will transport you back in time.

Built under the orders of Isa-beg Isakovic in 1462, the Bascarsija became the heart of the community in the city, a place for tradesmen, scholars, students and artisans to prosper. Much of the bazaar remains today, and an afternoon spent walking its cobblestone alleys is like walking through an oriental film set. In fact, the Baščaršija would not look out of place on the film set of the Netflix series Dirilis: Ertugrul. Here you’ll find beautiful unique gifts to take back home. For instance, embroidered fabrics, handmade artwork, copper coffee sets and bullet pens, to name a few. 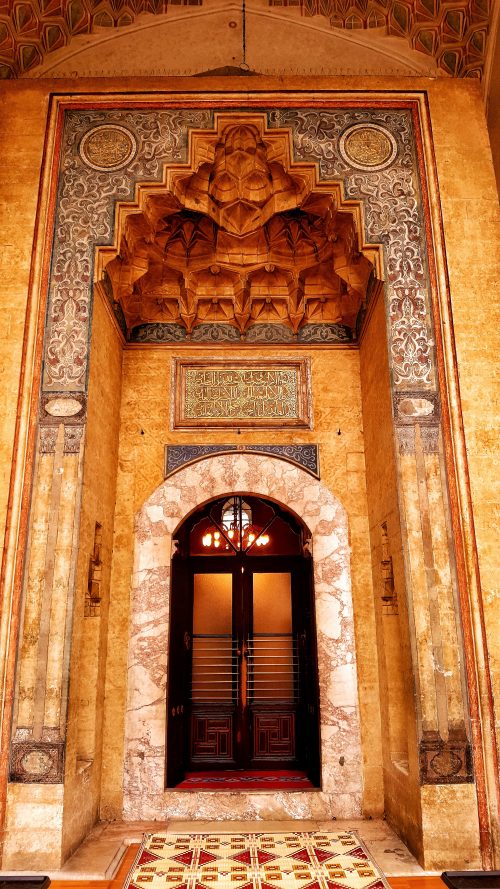 Believed to be the first mosque in the world to receive electric lights, the Gazi Husrev-Beg Camija is located in the heart of the Baščaršija. Built in the 16th century, it’s possible that the architect of this beautiful Ottoman mosque was Mimar Sinan as he was in the region at the time. Although, the truth about the architect is debated. This is the largest and most important historical mosque in all of Bosnia Herzegovina, and not just for its beautiful design.

Gazi Husrev-Beg, for whom this mosque is named, was an Ottoman governor who is credited for many important buildings in Sarajevo. The mosque itself is part of the waqf he left behind – a charitable trust fund. Next to the mosque are the madrasa buildings, which since their creation have continuously provided a high-quality primary and secondary education for over 400 years. 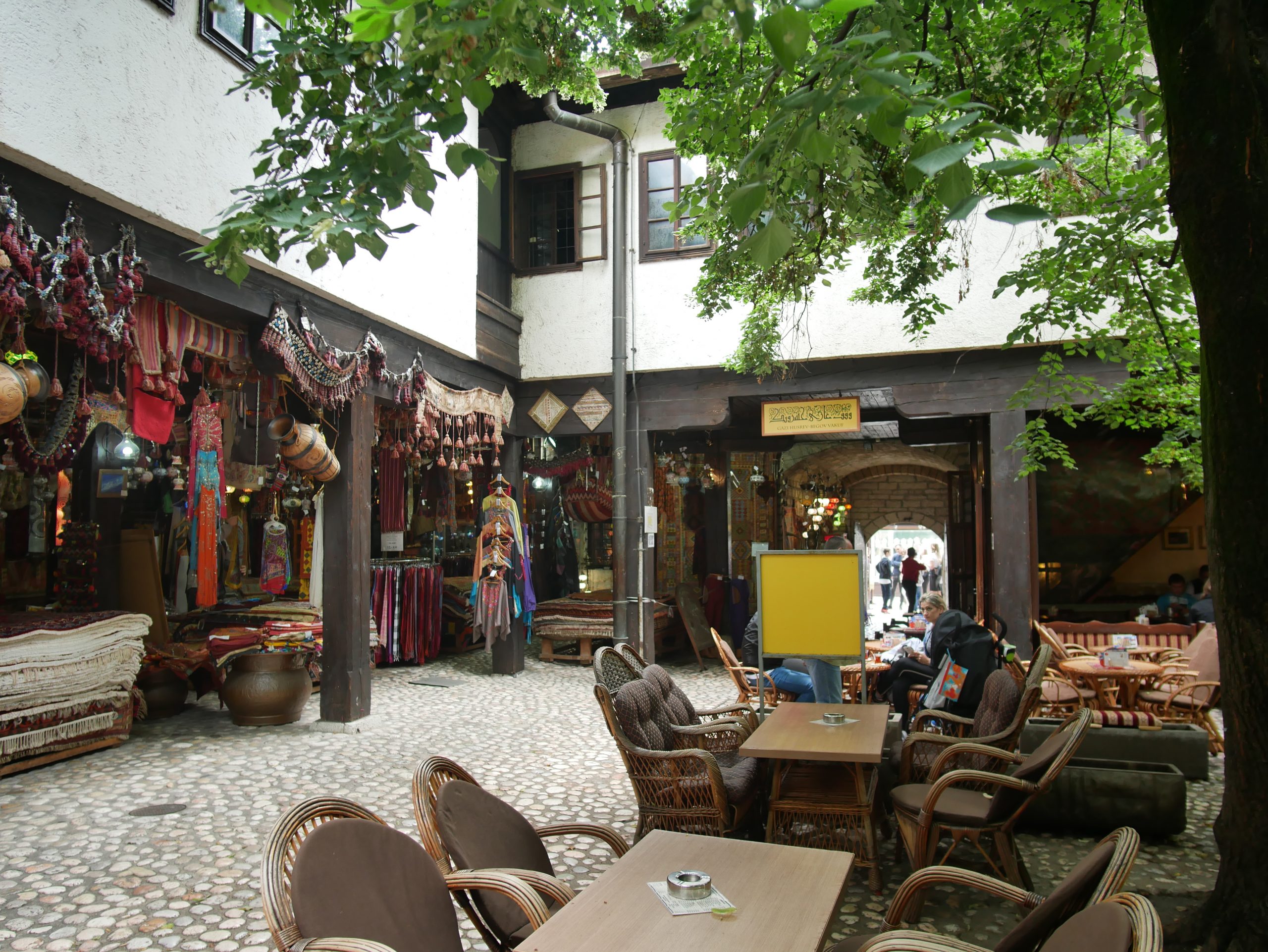 Morica Han has a unique atmosphere for a cafe-restaurant, with traditional decor and a selection of hot drinks and traditional cakes. Photo: Soumaya Hamdi

In October 2019, this place was named a national monument of Bosnia Herzegovina. This han (‘khan’ or inn) is one of the most unique legacies in Bosnia of the Ottoman empire, few of which remain. This place is also part of Gazi Husrev-Beg’s waqf. Morica Han was once an operating caravanserai that could host up to 70 horses and 300 people. It’s still in use today, but not to host weary travellers looking for a place to stay. Instead, you can enjoy a traditional Bosnian coffee with the sweet and sticky poached apple dessert known as tufahija inside the Han’s cosy café, or browse through the beautifully patterned traditional clothing on sale opposite. 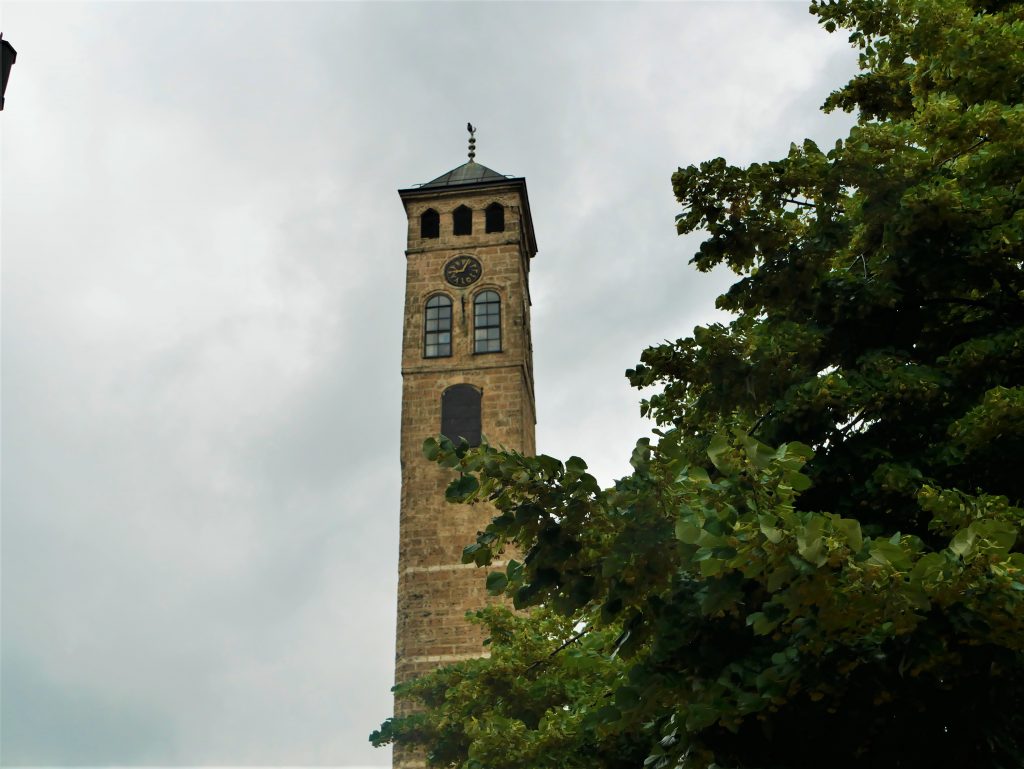 The lunar clock tower in Bascarsija, Sarajevo, is one of the only ones left in the world. Photo: Soumaya Hamdi

Located next to Gazi Husrev-Beg Mosque, this is the world’s last public lunar clock tower. What makes this clock so distinctive is that it appears to tell the incorrect time. While in fact, it tells (highly accurately) the time for each salaat. For over 400 years, timekeepers known as ‘muvekit’ have climbed up and down this clock tower on a daily basis. The aim was to maintain the accuracy of the time shown on the clock. The qualifications required for this job are steep. Timekeepers needed to have a deep knowledge of maths, astronomy and astrology in order to preserve the clock’s accuracy. 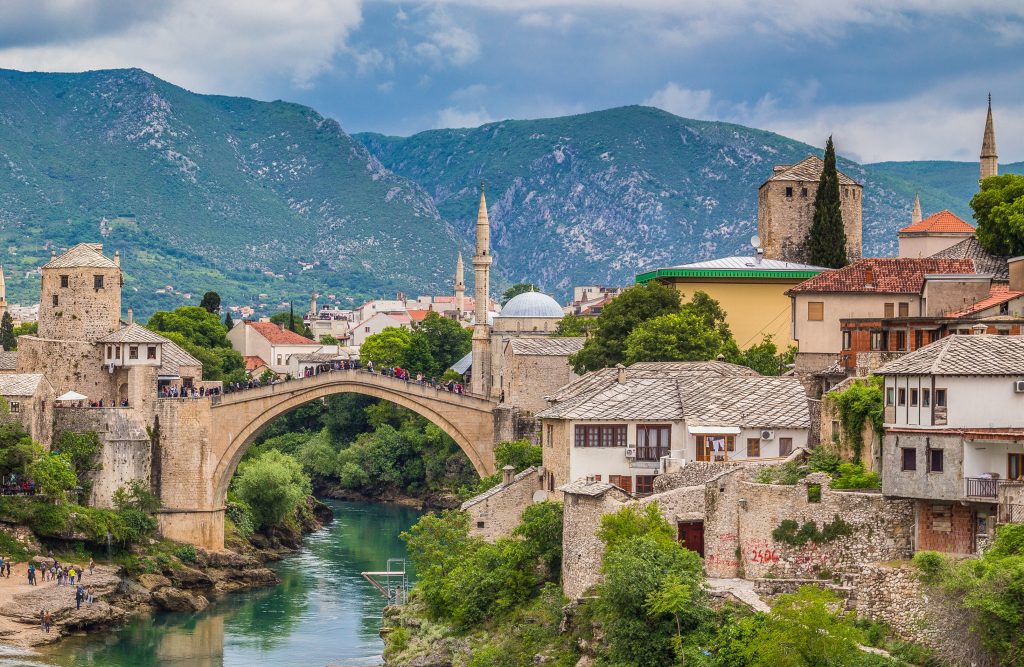 Panoramic view of the historic town of Mostar with famous Old Bridge (Stari Most), a UNESCO World Heritage Site since 2005, on a rainy day with dark clouds in summer, Bosnia and Herzegovina. Photo: JFL Photography

This is one of the most beautiful bridges in the world. Stari Most has a unique design and scenic location over the rushing jade waters of the Neretva river. In 16th Century, Sultan Suleiman gave commissioned to build this bridge. This bridge is particularly special because it has no foundations supporting it from collapsing into the water. It is said that on the day the bridge was to be unveiled to the Sultan, the bridge’s architect, Mimar Hayruddin, began preparing his funeral shroud. He was convinced that once the scaffolding came off the bridge it would collapse, leaving him in bad favour with the sultan. Despite Hayruddin’s fears, the bridge did not collapse. In fact, it stood proudly and powerfully over the Neretva river for 427 years. Until it was shot down by Croat forces during the Bosnian war on 9 November 1993.

Reconstruction of the bridge began in 1997. They applied the same building techniques that have used over four centuries earlier. Thus, they could preserve the integrity of the original Stari Most. 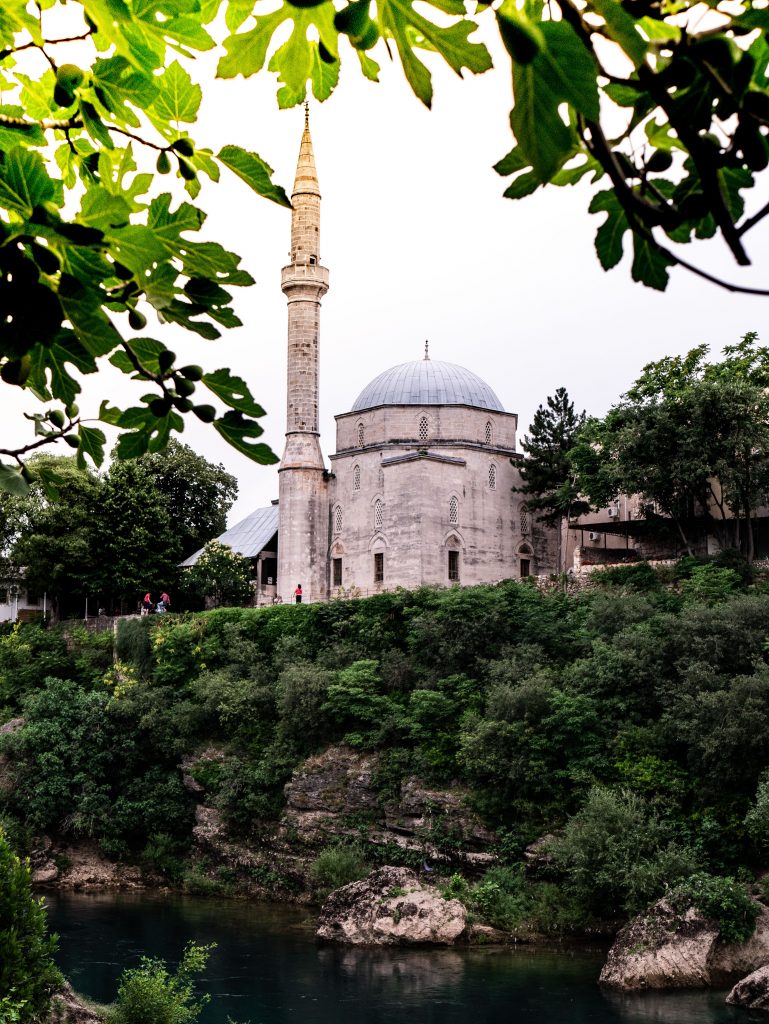 Koski Mehmet Pasha Camija is not just beautiful in the inside. It’s located in a scenic spot resting on the bank of the Neretva River. Photo: Soumaya Hamdi

Do you want to have a unique experience? Try climbing up the minaret of Koski Mehmet Pasha mosque to enjoy a 360-degree view over the Old Town. Built in 1619, the mosque has a distinctly Ottoman feel with a beautiful coloured mihrab carved into the far wall. This mosque is located on the banks of the Neretva River. If you walk through the gated courtyard to its right, you’ll be able to enjoy one of the most beautiful views of Stari Most. 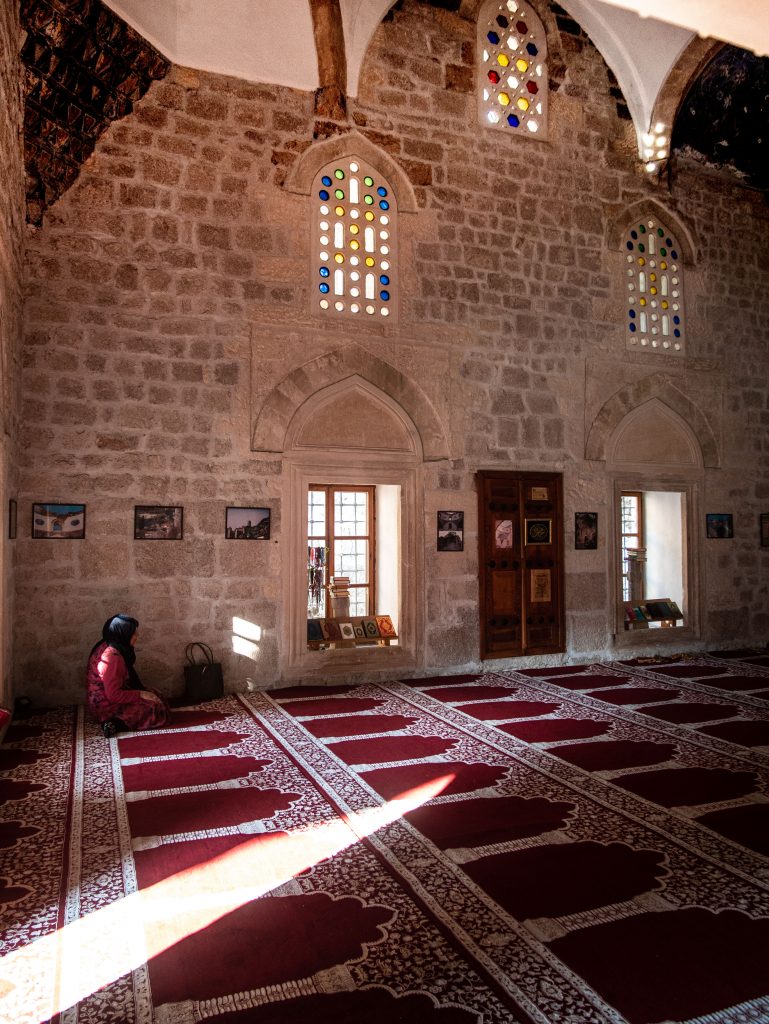 This medieval fortified village is a 17th century time capsule that was once a key lookout post. Under the Ottoman Empire, this settlement grew with the building of a mosque, madrasa, hamam, charitable kitchen and han. Walking up the old stone steps that lead up to the mosque of Šišman Ibrahim-Paša, you’ll see one of the most beautiful classical Ottoman-style mosques in Bosnia Herzegovina. As you continue to walk higher up the hill, you’ll notice the wild pomegranate and fig trees that overhang the pathway. Pocitelj is one of UNESCO’s heritage sites. It is definitely a unique experience to make a visit here. Moreover, those who can reach the top of the fortress get a reward of a panoramic view over the Neretva river and Herzegovina. 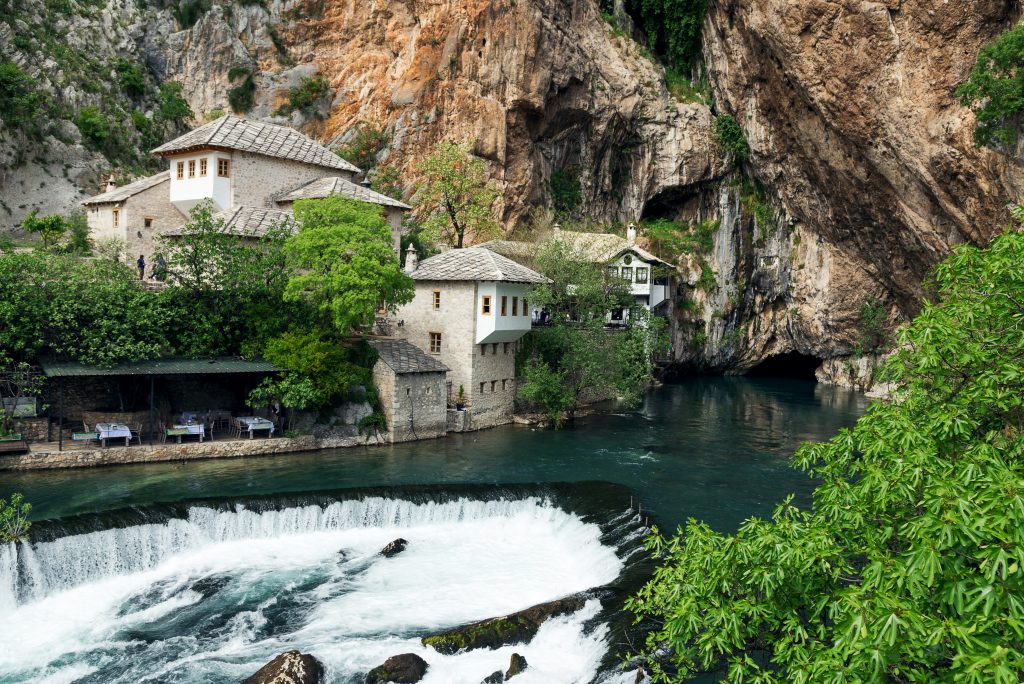 The beautiful location of Blagaj Tekija is both peaceful and spiritual. Photo: Novak

Blagaj Tekija (pronounced ‘Blag-aye Tekiya’) is a 600-year-old Ottoman Dervish House that had gone through a restoration. It is nestled against a rock-face above the source of the river Buna. It’s easy to see why this location was an ideal sanctuary. It is a perfect environment for the pious to reflect, contemplate and worship.

The rushing jade-coloured water, numerous bird species and green surroundings make it a place of peace and harmony. There are several rooms inside the tekija which are open to the public. You can definitely explore and give an authentic insight into traditional Ottoman living quarters. 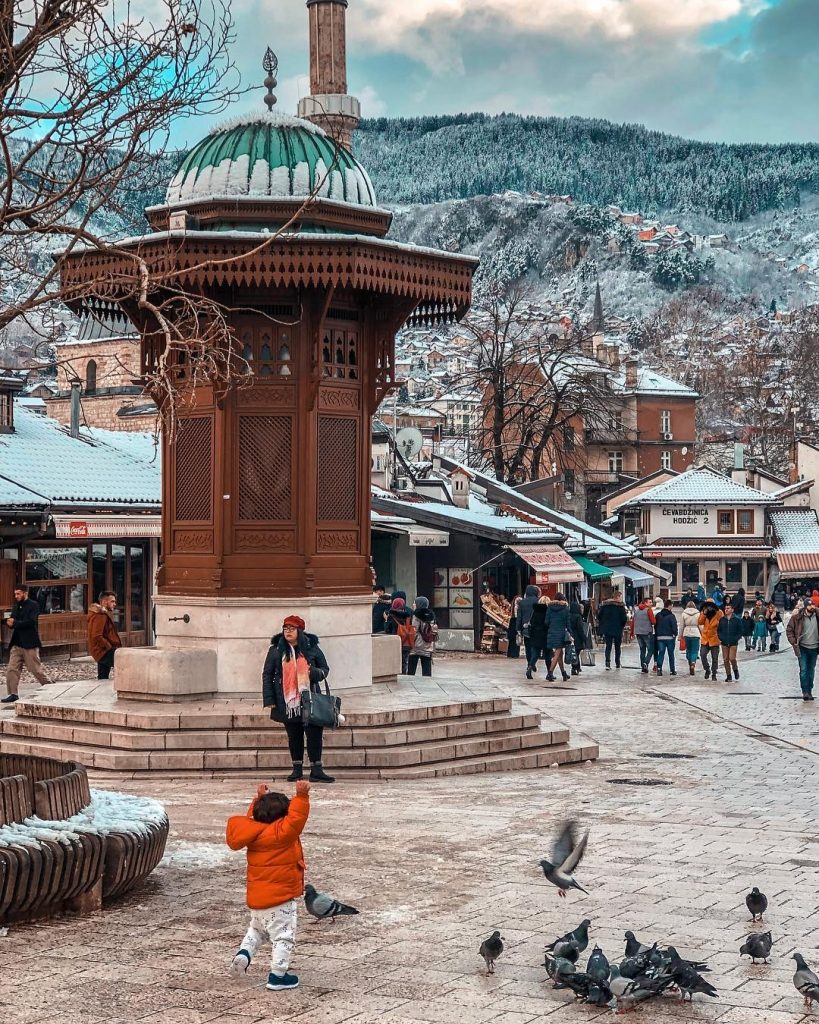 Ottoman drinking water fountains can be found all over Bosnia Herzegovina. This is the most famous, the Sebilj fountain, located in the old heart of Sarajevo. Photo: Haciabden/Instagram

Once upon a time, Sarajevo was home to numerous public drinking water fountains. It was the legacy of the Ottoman empire. Today, however, you can only find one sebilj which stands proudly in the old bazaar, the Baščaršija. This Sarajevo’s icon is beneficial to the general public because it provides clean and freely available drinking water. Moreover, the locals say that if you are a visitor, you should drink from the fountain. Since people believe that drinking the water will give you a good fate and it will make you come back to this place. Whether that’s actually the case, the crisp clear water is well worth a taste!

This list only covers some of the more well-known Ottoman heritage sites in Bosnia-Herzegovina. However, there are many more heritage sites across the country.

This article is part of Halal Travel Guide’s project to #OwnYourNarrative.

Launched in December 2017 with our two-part Andalucia series, our aim is to shed light on Islamic history through travel.

Visit all of these sites when you travel with us to Bosnia. We work with locals to provide an authentic Balkan experience. Also, to connect Muslims all over the world with each other. Find out more about our range of experiences and activities.