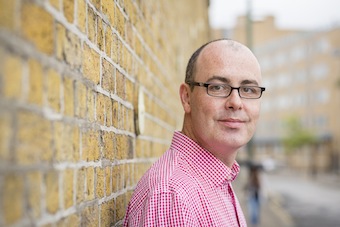 Matthew Anderson is the Executive Director of UK export trade body TVET UK. For the last 15 years he has been working with governments and companies all over the world to reform education systems. He is a regular visitor to Algeria who has fallen in love with the country and is now planning to cement this relationship with his new company TVET UK Algerie.

Matthew was interviewed by the International Interest (the ‘I.i.’) regarding his work and views on Algeria.

I.i.: It is worth starting by describing what you actually do in Algeria

Matthew: We set up about 8 years ago to help UK education companies export equipment, training and consultancy services globally. We are mainly now focused on markets that are not normally considered ‘hot-spots’ for UK providers. So four and a half years ago we began to explore Algeria.

In the beginning, we were frustrated by the slow progress so we sat down last year and decided that we should either give up on Algeria or we go for it whole-heartedly. The latter would mean having someone on the ground full-time. So we went for it and things started to move so we launched TVET UK Algerie late last year.

We are now currently in the process of setting up an Algerian limited company to augment the satellite office there which we hope to use to promote and export UK education to Algeria.

I.i. : What were your first impressions? Had you heard about life there before?

Matthew: I knew of Algeria as a country as we had done work in North Africa before and I had spoken with the British ambassador there. But I didn’t really know Algeria very well as a place although it was clear there was an opportunity there from those that knew it.

Some parts of Algeria are very familiar and feel a bit French which is understandable given the 132 years of occupation. So in that respect it’s not so strange.

I.i.: Some say it can be a difficult place to live in. Is this true?

Matthew: I’ve not actually lived there but visit regularly. I know people that do and they lead “normal lives” by UK standards. One thing that struck me is that one day we were on a touristic tour in the Casbah and there were satellite dishes on all the roofs. Algerians are definitely a nation of TV watchers!

Algeria is certainly nowhere near the last places anyone would want to live if you look at the main cities they have the usual services.

I.i.: Did the security issues not concern you?

Matthew: No it didn’t concern me and I am asked about this by everyone. I think one of the reasons is because I went to Algeria without having done much research. Having said that, I have never felt unsafe or threatened. The road blocks are definitely frustrating when trying to move between meetings. But I would rather they were there. I have been to Iraq, Syria etc…before so Algeria in comparison is not really an issue. I can also say that it is probably safer than some parts of London.

I.i.: What about the culture shock?

Matthew: I am used to travelling in Arabia. I was surprised how mixed it was. You could find some people wearing western clothes having deep conversation with someone wearing a veil. It was a very familiar feel as an Arab country but there was a definite European feel about it; a mix of traditional and European influence.

I.i.: What would you say is the best place you have visited in Algeria?

Matthew: First of all because of its history. Also, you feel as if the city has a completely different culture to other places I have been in Algeria. There is a relatively strict culture and I vividly remember the woman draped in a white burka with only one eye showing. I had never seen that before and it was very interesting.

I.i.: Algeria is not usually chosen as a holiday destination. Is this justified?

Matthew: Depends on the type of tourism. British adventure/cultural tourists would be perfectly justified in going. There is also the beach and the sun. As a cultural holiday, Algeria is definitely an undiscovered gem with places like Tipaza etc… but there has not been much work done on the tourism infrastructure side which needs to be addressed. Having said that, I do not think Algeria should compete with Tunisia and Morocco for cheap family holidays. Algeria should focus on its rich and deep history and culture. The country is filled with historic sites. The Mediterranean doesn’t need any more low cost resorts. The type of tourists that should come are the low volume, high spending cultural tourists. I have to say though that the visa requirements are a pain.

I.i.: Would you encourage others to visit?

Matthew: That’s my job. Absolutely! We are constantly trying to push businesses to go to Algeria and we are becoming more and more successful in this.