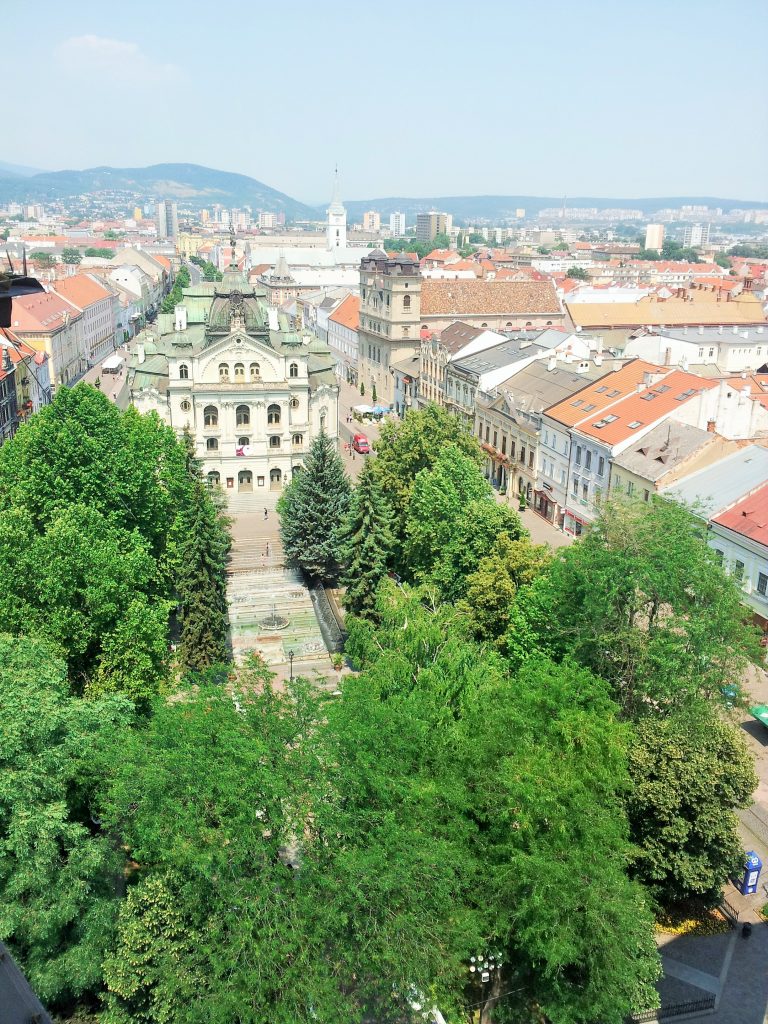 A former ‘European Capital of Culture’ (ECC 2013) and soon to be ‘European Capital of Sport’ (2016), Košice has metamorphasised from chrysalis to cultural butterfly. ECC 2013 left a lasting legacy and was a catalyst to propel Slovakia’s second largest city from industrial heartland to a creative cultural centre.

A new breed of artistic and cultural entrepreneurs have found their voice and are not only complimenting but transforming the city. Viktor Fehér is one such artist, driving forward his “open city gallery” project as the founder of ‘Street Art Communication’, an idea conceived in 2008, which has its roots in his formative years as a graffiti artist in the 1990s. Today, twenty-six major murals adorn the walls of what can only be described as the brutalist soviet apartment blocks that remain a blight on the urban landscape for many post-soviet towns and cities, such as Košice .

Using the dull urban sprawl outside of the capital’s historic centre as a blank canvas, and boosted by the funding stream ECC status had provided, Fehér has turned Košice into a city of contemporary murals by exponents of the genre from across the globe; Inti, Razk437, Phlegm, Bezt + Pener, Erica Il Cane among others, have all tagged their names to large-scale art work in particular districts of the city.

One of the most impressive comes from ‘Bezt + Pener’, who used the entire gable-end of a ten-storey apartment block to create the most eye-catching image entitled ‘The Healer’. The fact that the building sits on ‘The Slovak National Uprising Street’ may well point towards the thoughts of the artists when they decided upon the subject matter. They created the image of a women gazing towards the sky, with her hands open and releasing a bird within an  explosion of geometric patterns (akin to a white dove being released signalling peace, her actions may signify art and creativity that has been set free in Košice). One’s eye is drawn from her bare feet to the very apex of the building and beyond, following her eye line skywards, as Fehér reminds us, “The interpretation of the art is up to your imagination, read into it what you feel”.

Tomáš Ďžadoň, another contemporary of the city’s up-and-coming artistic fraternity, has created his own highly visible art installation and once again used a bland apartment block as his platform. Resting atop the building is a trio of wooden structures that are known as ‘Drevenice’, a term used to describe the early style of Slovak homes and barns that once spread across the land in a bygone era.

Ďžadoň says he “was inspired by the notion of heritage” and that “my earliest memories are not from the ‘Drevenice’ style of buildings but from the very building we are standing on today, yet for my parents they remember these 100-year old wooden structures”, thus the installation is connecting  both sets of memories and bridging the generation gap. What is fascinating is that Ďžadoň had to place a newspaper advert to find a building willing to accept the concept and the 42-tonnes of wood that would sit above the resident’s heads. Mr Štolfa, the building manager of a block responded to the advert and just by pure chance this particular apartment is in a district that has a more elevated position; meaning Ďžadoň’s art installation is visible as far out as ‘Hradova Hill’ (Castle Hill) at the northern edge of Košice which is home to the medieval remains of a fortress. Ďžadoň said “the building found me”. As much as he had tried he could not have hand-picked a better location!

Fehér and Ďžadoň are part of a much wider creative and cultural infrastructure that was created by ECC and using it as a powerful force for change. The creative hubs of the city remain just a few steps from the historic centre, connecting the past with the future. This is the Kulturpark – a former military barracks and the Kunsthalle, a former swimming pool, built in the 1950s by architect Ladislav Grec, both of which now offer unique spaces to foster art and education.

This change is intertwined with the region’s colourful and tumultuous history that over the centuries bounced between invading powers, each placing a new layer to the history of Košice. As with many cities, the architecture reflects its diverse and often complex lineage. Košice is a prime example sharing masonry of renaissance, baroque, rococo and art nouveau edifices. The city’s location answers some of these architectural legacies as Košice sits on several trading routes.

To peel back these layers, it is worth getting a birds-eye view of Slovakia’s largest old town dating back to the 13th century. From ‘Sigismund Tower’ the north tower of St Elizabeth’s Cathedral is the place to contemplate the history and beauty of Hlavná Ulica (Main Street) and beyond. Having climbed the 161 spiralling and narrow stone steps the reward from the lookout is dramatic. Immediately below, the ‘singing fountain’ sprays water high in the air that prances and pirouettes to music as if on the stage at the ‘state theatre’ that it sits in front of; the grand theatre building was designed by Adolf Lang, and is a mixture of Neo-baroque and Art nouveau styles.

The roof tiles of St Elizabeth Cathedral are an amazing pastiche of mosaic-style hues in browns, yellows, blues and whites, with majestic buttresses and gargoyles. Construction of the Cathedral started around 1380 and is the eastern most gothic cathedral in Europe. Some of the many highlights it boasts are a rare double spiral staircase (one of just five of its kind in Europe), the Altar of St. Elizabeth and a sundial dating from 1477. In the immediate surrounds of the church you will find the Bell Tower of St Urban – the patron saint of wine makers.

Looking south from the Sigismund’s tower, St Michael’s Chapel dates to the 14th Century and is another fine example of gothic architecture. Beyond the chapel, a bronze statue of the current Košice coat-of-arms stands proud as the original was granted to the city in 1369 by King Louis the Great and Košice was the first in Europe to receive such a privilege. The original town fortifications and gateway to the city are opposite the statue, and remnants of the original city walls poke up from the subterranean museum complex.

What cannot not be seen or felt from the 60 metre perch in the tower is the buzz of the cafes and restaurants that spill on to the pavements daily. Hidden gems form part of any exploration on foot in the cobbled alleyways and side streets that run parallel to the aristocratic palaces, churches and historic dwellings that line both sides of Hlavná Ulica.

On Zbronjnicna Street, the seated sculpture of Sándor Márai-one of the 20th century’s great literary figures-is quietly in repose. The sculptor, Peter Casper, captured Marai’s relaxed yet contemplative mood with a companionable sense of well-being as if the author will rise to his feet and guide you around the city of his birth which reverberates in his literary work. If he had the chance today, much of the historic centre would resonate with his earliest memories and he could point out the house of his birth, the Premonstratensian School he attended and even the former confectionary store where he met his wife during an ice cream-eating competition, all of which can be visited.

From above and at ground level the city is such an anomaly. Contemporary murals co-exist with ancient frescos and the historic central promenade (deserving of UNESCO Heritage status) is surrounded by the soviet style apartment blocks built for workers of the nearby steel plant. Beyond that the high-rise concrete gives way to some of the most extensive forests in central Europe. Exploring the surrounding region is every bit as interesting and engaging as the city itself.

Bratislava may be the capital but Košice is proving to be the country’s creative hub bolstered by a quirky and independent air that has appealed to emperors, kings, presidents, popes and now attracting a new wave of artists, entrepreneurs and tourists. This east Slovakian city really is shouting from the top of Sigismund’s Tower and more than ready to host the next big event, as ‘European Capital of Sport 2016’; after all this is where Europe’s oldest marathon is run.

Ramy Salameh flew with www.wizzair.com from London Luton to Košice. For more information go to www.visitkosice.eu.

To view all murals in Košice go to http://www.pyecka.com/en/show/murals