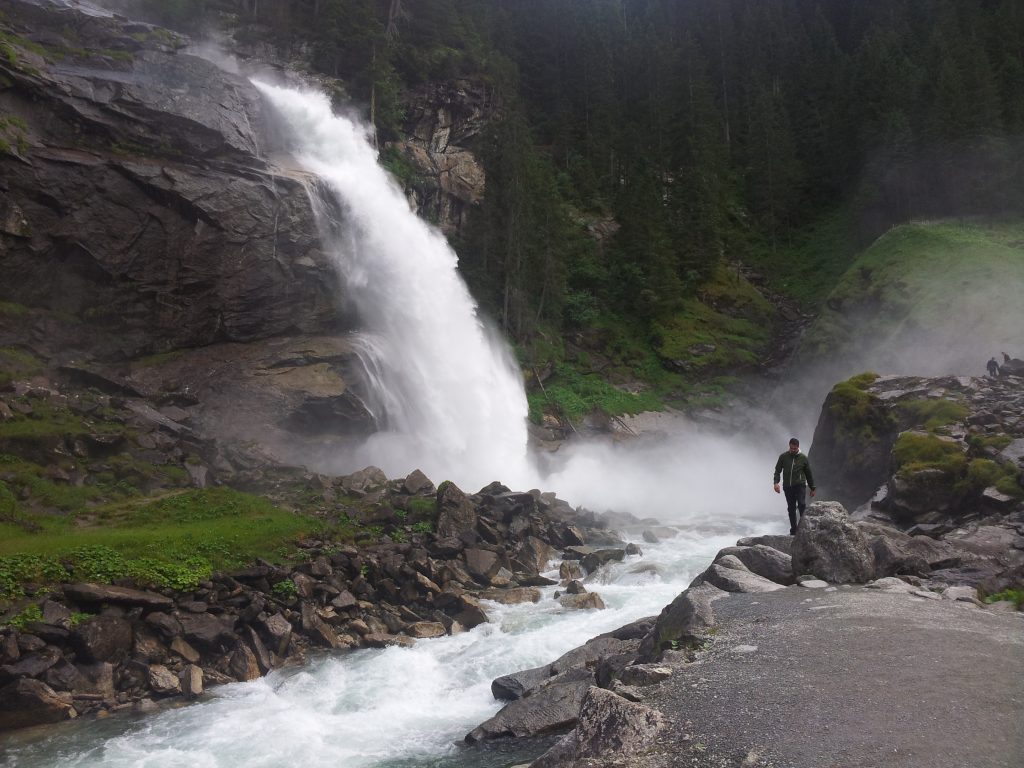 It was as long as 500 years ago that the famous Austrian Doctor Paracelsus expressed the view that ‘each country is given its own illnesses, but for each of these illnesses they have been granted their own ancient medicines and remedies’.

Standing below the thundering cascade of fifth highest waterfall in the world, the ‘Krimml’ located in Hohe Tauern National Park, Salzburgerland, the doctor’s sentiments seem to make more sense. Krimml waterfalls have been scientifically proven by the Paracelsus Medical University in Salzburg to have healing properties. The fine spray that covered my face in regular refreshing bursts accompanied by a crescendo of noise is not just visually appealing but has a positive effect on the respiratory tract and improves lung function.

The source of the Krimml Waterfalls is the mountain waters of the ‘Krimml Ache’, a glacial stream who’s comparatively gentler flow bypasses the verdant and rolling pastures so common in Austria, before hurtling down a trio of sheer rock cascades at 20 to 25 cubic metres per second. Standing at the bottom of this mighty wonder of nature, the words ‘glacial stream’ seem a little tepid as millions of gallons of water are deposited into the valley each hour and the thunderous roar of nature can be heard kilometres away. The feeling is exhilarating!

The water tumbles from a height of 380 metres and hits the rocks on the valley floor with such incredible force that the water molecules shatter into tiny fragments. The resulting effect is mushrooming clouds of micro-fine spray with a high density of negatively charged air ions which attach themselves to each droplet. When inhaled they penetrate deep into the respiratory tract giving a long-lasting and cleansing effect on the body and immune system. As early as 1808, the late medical expert Wolfgang Oberlechner recommended stays at the Krimml Waterfalls to his patients, and this practise continues today as a natural remedy, opening up new therapeutic options to allergy sufferers and asthmatics.

The waterfalls are also the starting point for the ‘Alpine Peace Crossing’ (APC Trail) initiative which was founded in 2007 by Dr. Ernst Loschner and is based on historical events that took place in the region. The APC Trail is dedicated to and is a means to remember refugees and displaced persons from around the world. The hike passes from Krimml Tauernhaus in Austria to the village of Kasern in Italy through the 2,634 metres high Krimmler Tauern pass, and is approximately a distance of 35km, taking up to 10 hours to complete.

The power and force of the waterfall and the surrounding area continues to benefit and amaze those who visit. Back in 1796, Europe’s highest waterfall was described as the “most magnificent natural spectacle in the State of Salzburg” and still today few can argue with this, as the sheer thrill and excitement of Krimml remains as potent as ever.