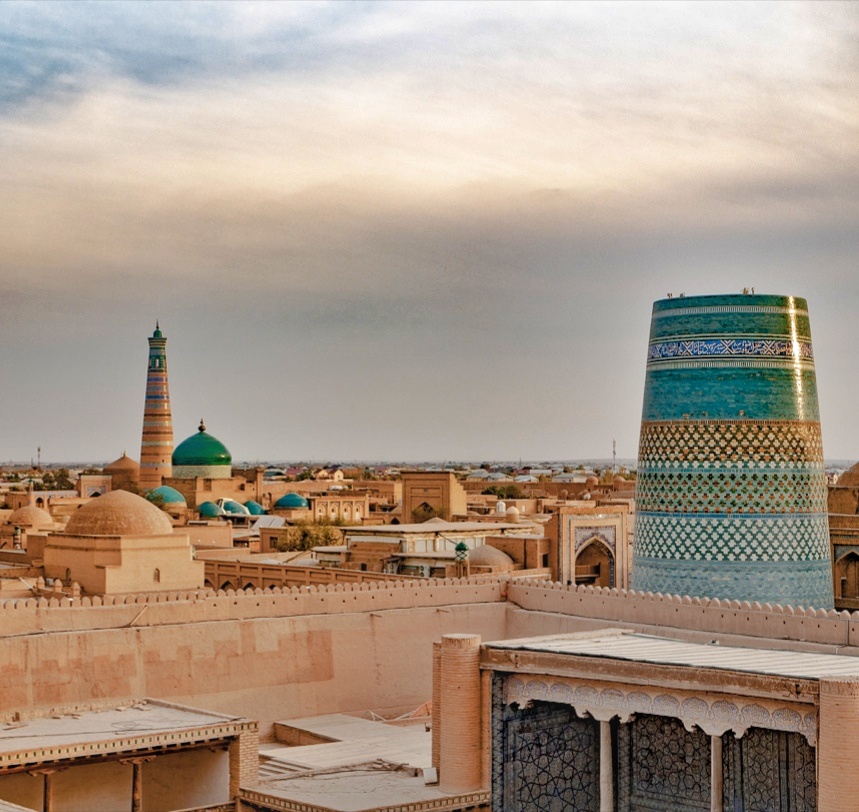 The walled city loomed ahead of us. Our tour guide, a Khiva native named Mohammed, drew our attention to a map depicting its significance in the region. It read:

“Welcome to Khiva, the heart of the Silk Road Route”.

Immediately, I was entranced.

Khiva, a small but historically mighty city, has been destroyed and rebuilt several times. The infamous Amir Timur – also known as Tamerlane – completely destroyed the city no less than five times. Now, it is a protected UNESCO world heritage site. Property in this gem of a city cannot be bought; only inherited. 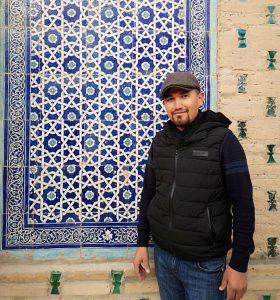 Our local guide Muhammed was a walking encyclopaedia of knowledge on the history of Khiva and Khorezm. © Halal Travel Guide

A Legend from the son of Noah

Mohammed told us a few theories as to where the name ‘Khiva’ comes from. My favourite is the legend that Prophet Nuh’s son and successor, Shem, had a dream that inspired him to build the city.  When he woke up, he set about his task and then dug the ‘Kheyvak’ well, from which the word ‘Khiva’ comes from. This well can be visited in Khiva even to this day.

Khiva is divided into two main parts: The Ichan-Kala – ‘Inside Walls’ – is a historic old town gated by 10 metre high walls. This section can only be entered through four gates and houses the treasure chest of Khiva’s architecture. As we entered through the main gate, a traditional Uzbek dance troupe shimmied and drummed their way through some folk tunes. A crowd formed around them, with some people joining in for a jig. It was a brilliant atmosphere, and everyone departed with smiles on their faces.

As the site is so protected, the only way to get around Itchan-Kala is by foot. It only takes a few hours to get around the mains parts of the walled city, but to truly appreciate the rich history I would recommend giving yourself at least a full day.

Inside the walled city 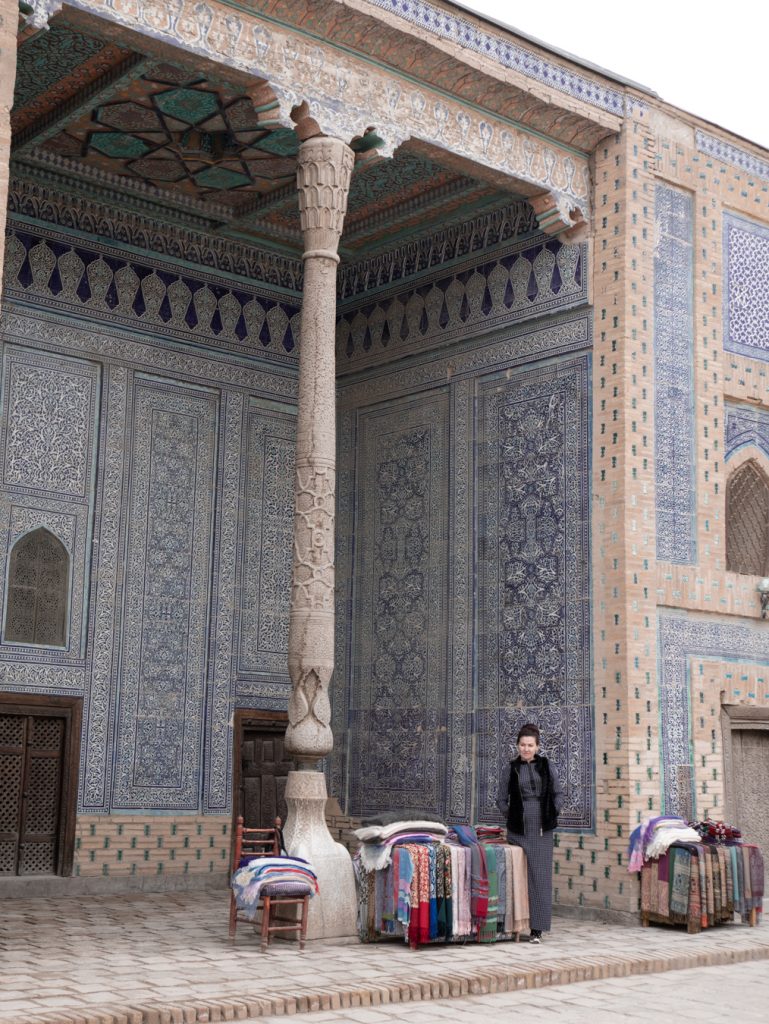 A local vendor stands by her stall inside one of the madrasahs in Khiva. © Halal Travel Guide

Just inside the gated entrances, street vendors sell luxurious fur hats, many of which reminded me of the ones worn in the popular Netflix drama Dirilis: Ertugrul. A number of local men sported the chugirma, hats made from sheep’s wool and used to keep warm during the winter and as a personal AC unit during the roasting hot summers. Much like us, the locals were trying the hat on more for the photo novelty after this hat was recently repopularised by Khabib Nurmagomedov. Leather jackets, silk and camel wool scarves, and hand-embroidered bags had us entranced at only the entrance to Itchan-Kala. Trading is not just a sideshow in Khiva; rather, it forms the basic foundations upon which the city was built. Although the city’s glory of being the centre of the Silk Road has long since faded, you can still buy high-quality goods here. In fact, out of the other cities we visited, this was the most affordable place to buy souvenirs.

Our guide Mohammed had to tear us away from the street vendors and walked us only a few hundred metres to one of the most distinct buildings in Khiva; the Kalta Minor or ‘Short Minaret’. The minaret is a turquoise tiled barrel-like structure, stump-like in appearance as it was never finished.  There are several legends to as why this is the case. Mohammed’s version was that when the Bukharan ruler learned about its construction he offered the chief architect the chance to build a taller minaret for him. Learning of this arrangement, the ruler of Khiva Muhammed Amin Khan decided to kill the corrupt architect, leaving it unfinished. There seemed to be quite a few stories like this and I got the impression that it was quite a dangerous time to be alive as an architect! 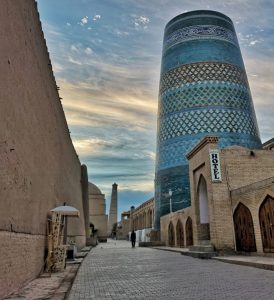 As I walked through the main gate, the incredible Kalta Minor came into view. © Halal Travel Guide

A Golden Age of Islam

What captured me even more than the beautiful jade blue tiles or gory power struggles over this region was the contributions some of its inhabitants have made to modern science, maths and geography. In 790 the future founder of algebra – Muhammed ibn Musa al-Khwarizmi – was born into a Persian Muslim family in Khiva. His name, I discovered, is actually the root word of algorithm, which came about through his research and findings into algebra and arithmetic. He was, I discovered, one of many scholars in Central Asia who contributed towards a Golden Era of knowledge and research that eventually spread to Europe and contributed towards the Renaissance.

Mohammed pointed us in the direction of an epitaph dedicated to one of the greatest scholars in this region, Al Biruni. A distinguished 11th Century physicist, mathematician, astronomer, historian, and linguist, Al Biruni’s work is still used to this day. One of his most interesting and less well-known legacies is that he correctly theorised the existence of a landmass between Europe and Asia – the Americas – centuries before Christopher Columbus stumbled upon its existence in the 15th Century.

A feast for the eyes (and our bellies) 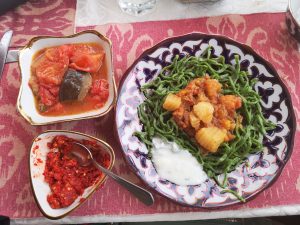 Don’t be fooled by the unusual colour of these noodles; this dish of dill noodles, mutton and potatoes was absolutely delicious. © Halal Travel Guide.

For lunch, we stopped at a family-run restaurant where we ate a local delicacy of green dill noodles, topped with a lamb stew and served with a dollop of yoghurt. I’m not the most adventurous person when it comes to food and I was slightly apprehensive to try it, but after digging in I was genuinely blown away by just how flavoursome it was. It was reassuring to know that I didn’t have to worry about halal food at all during our journey through Uzbekistan. What was even more special though was the privilege of having halal and authentic local cuisine. Hot and crispy somsa pastry filled with fragrant lamb, steaming piles of plov dotted with sultanas and slow-cooked meat…it became clear to me that food in this part of the world is something I would unlikely encounter again elsewhere which spurred me to try most things put in front of me.

As we tucked in, a bride in a grand white dress on the arm of a dapper-looking groom walked passed our restaurant, photographer in tow. Apparently, Khiva is a hotspot for newlyweds to come and take their wedding photos as the historic walled city provides a brilliant backdrop. We noticed throughout the course of the day many more bridal parties. The locals are really friendly and we were even asked to join in some bridal party photos!

We continued our tour of the Itchan-Kala, passing through the Madrasahs of past Khans and mausoleums of holy people. The architects took inspiration from a variety of different cultures, with the geometric intricacy of the Ottoman Empire meeting the vivid blue colours from the Tang Dynasty in China. It was only our first stop on the Silk Road, but already our visit to Khiva had me falling in love with Uzbekistan…

Halal Travel Guide offers 7-day tours through Uzbekistan during which you will explore the country’s Islamic heritage, breath-taking architecture and sample some of the most delicious halal food in Central Asia, for £850. The price includes all accommodation, airport transfers, full-board meals, private car hire and guides. To find out more request an information pack by emailing hello@halaltravelguide.net with the subject ‘Adventure in Uzbekistan’.