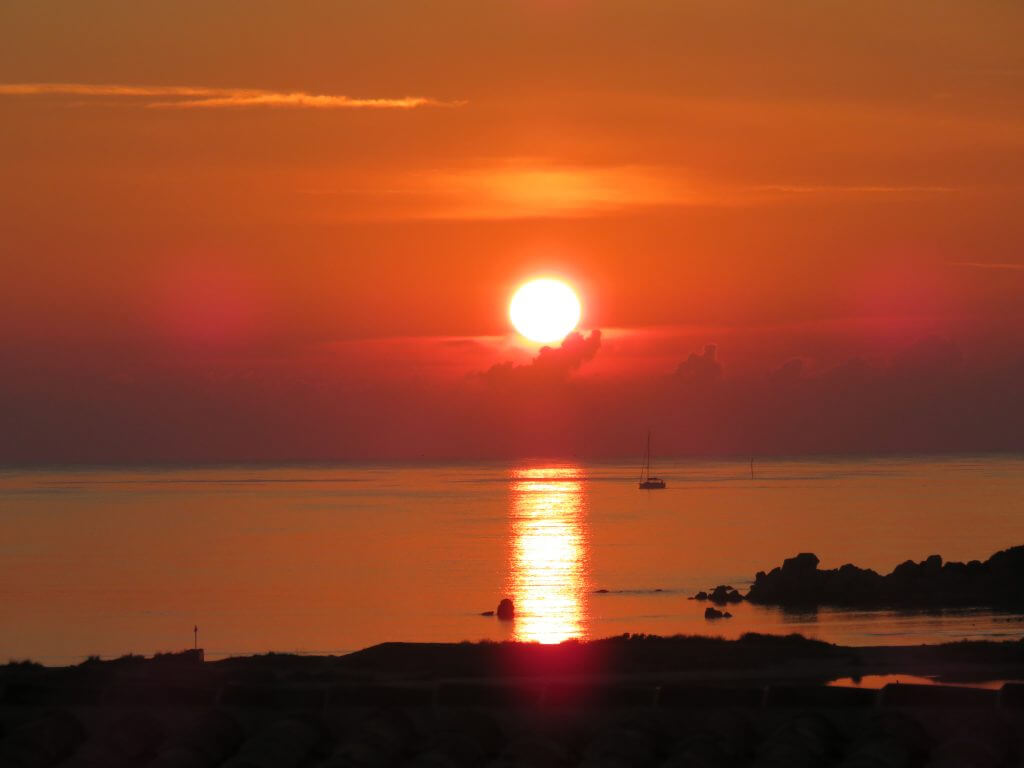 The north east coastline of Sardinia at one stage in the past, was seen by farmers as useless for grazing their cattle. The real bounty lied in the mountainous interior that produced more than the fishing line could. And so the coastal land was given over to the women folk to continue their crafts and to fish.

Little could these local Sardinians have ever imagined that in the 1960’s Prince Karim Aga Khan IV would turn part of this rugged and idyllic coastline into one of the most exclusive ‘go to’ vacation destinations for the super-rich, albeit in an eco-sensitive way using local architectural styles and materials that were innate to the island. This brought the focus back from the mountains to the shoreline, which to this day remains very popular, however, there is a growing interest to head inland and discover the rustic and wild interior.

The turquoise coastline is as blue as the sky, as it circuits the Mediterranean’s second biggest Island. The enchanting cluster of marinas, villages, countless bays, coves and sandy beaches is especially charming either side of Olbia city; in one direction the glitz and glamour of Costa Smeralda and in the other the marine protected area of Tavolara.

But as I was to find out, just behind this enigmatic coastline, there is a dramatic and beautiful inner spine of mountainous terrain, increasing enthusiasm to uncover the pastoral culture of the rugged interior that blossoms with all types of fauna and flora and boasts an unusually high number of Island centenarian inhabitants, brought about through their healthy lifestyle. One does not need to step back far from the coast to find a side of Sardinia that cannot have changed much in centuries.

Standing atop Galluria’s Mt Nieddu, my eyes focused intently on a falcon that was hovering in the void between the embrace of the mountains. For those few mesmerizing seconds this majestic bird appeared motionless in the air, before swooping and banking hard around the mountain in search of prey. With one natural spectacle over, another came into focus as a butterfly fluttered beyond my nose resting on the granite slab that seconds before was adorned with the outstretched limbs of a lizard, before it darted into the macchia scrub.

I was so consumed by this natural theatre taking place around me, that when I finally readjusted my focus into the distance, the pristine coastline came into view. To the north-west of my sightline, the huge iceberg-like granite outline of ‘Isola Tavolara’ towered over a series of arching bays of white sands that shield the lagoon areas from the ocean; this whole sweep of coastline is a marine protected area. Clusters of terracotta red roofs broke up the natural scenery, yet blended harmoniously into the Gallurian countryside. 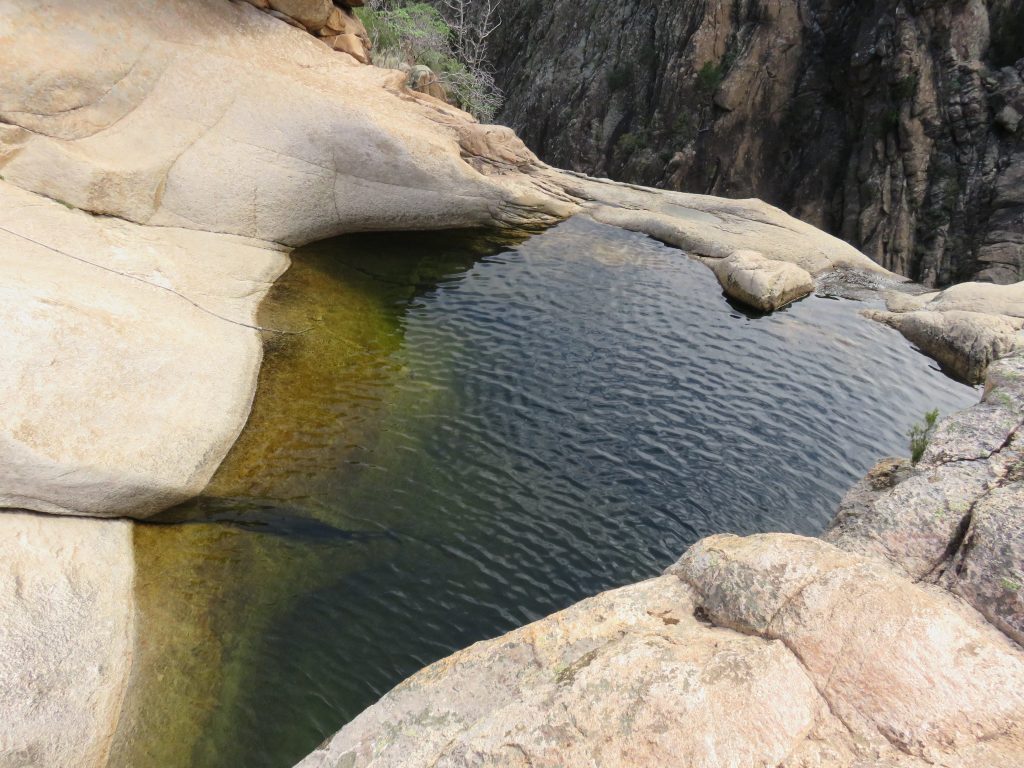 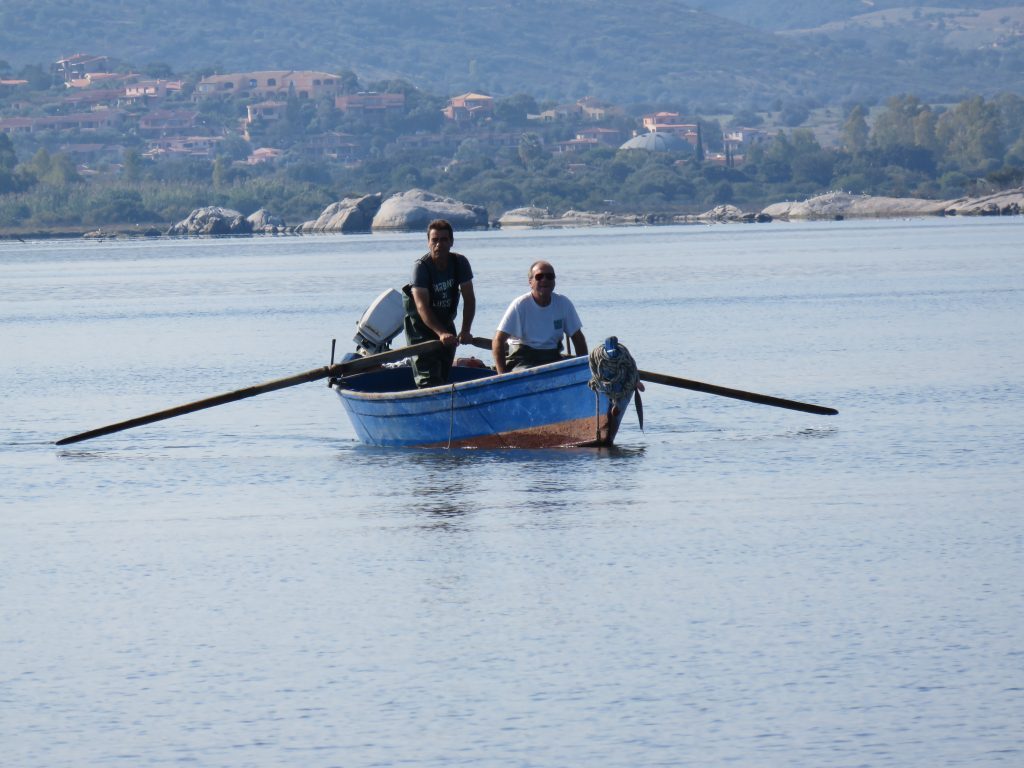 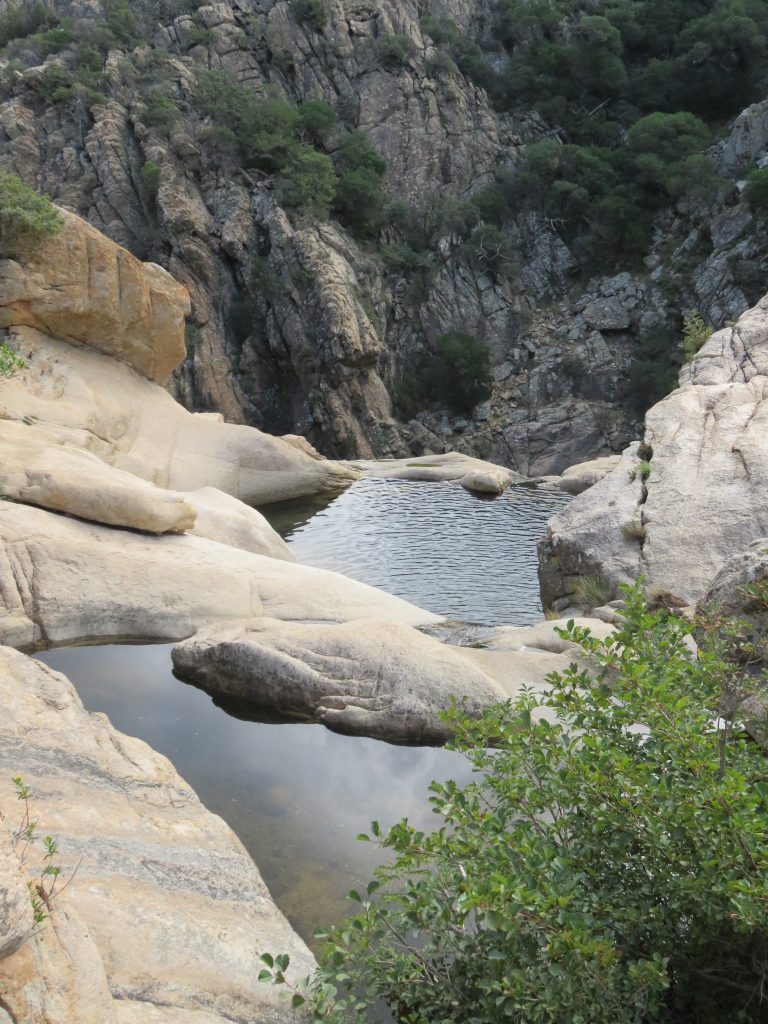 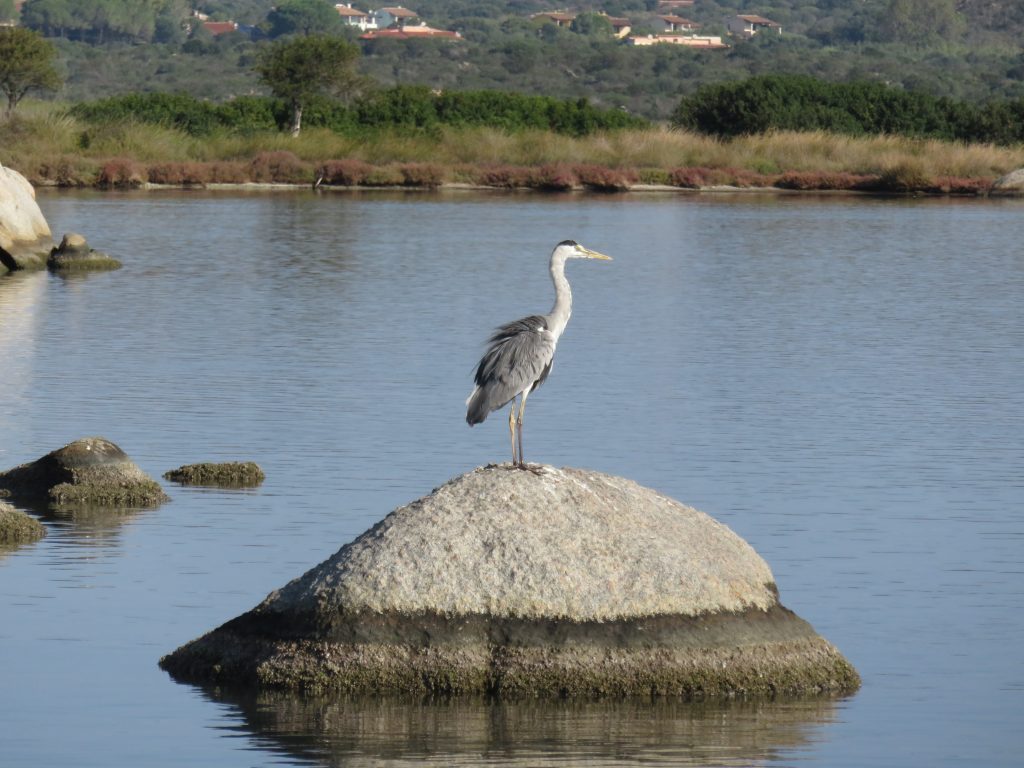 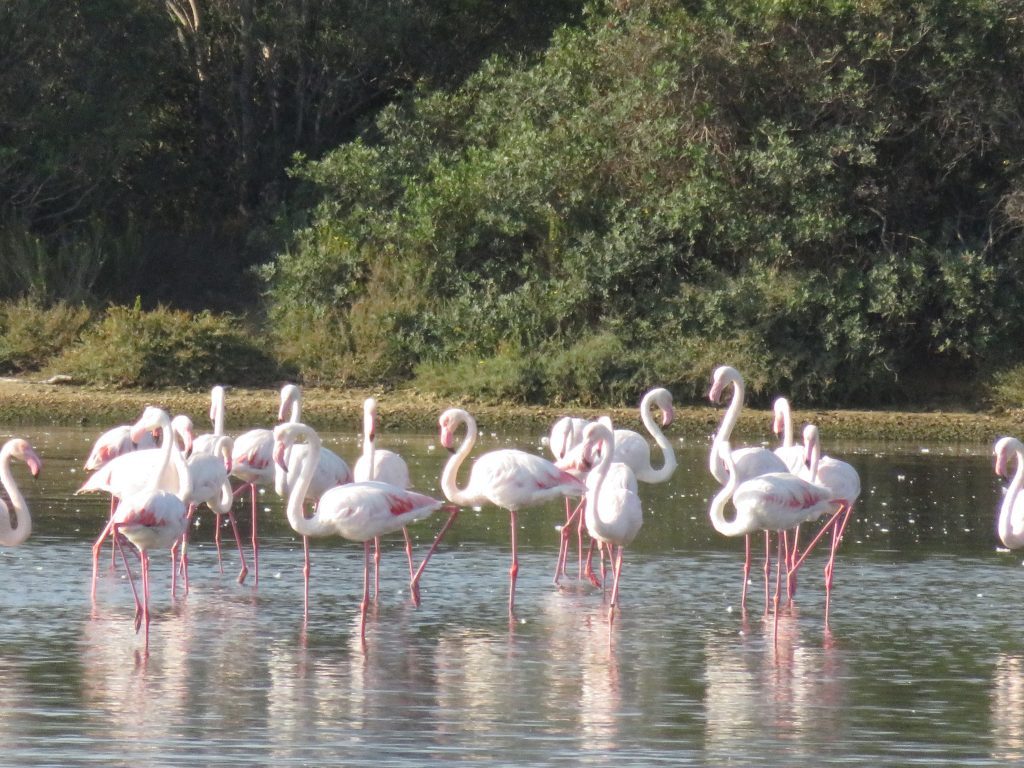 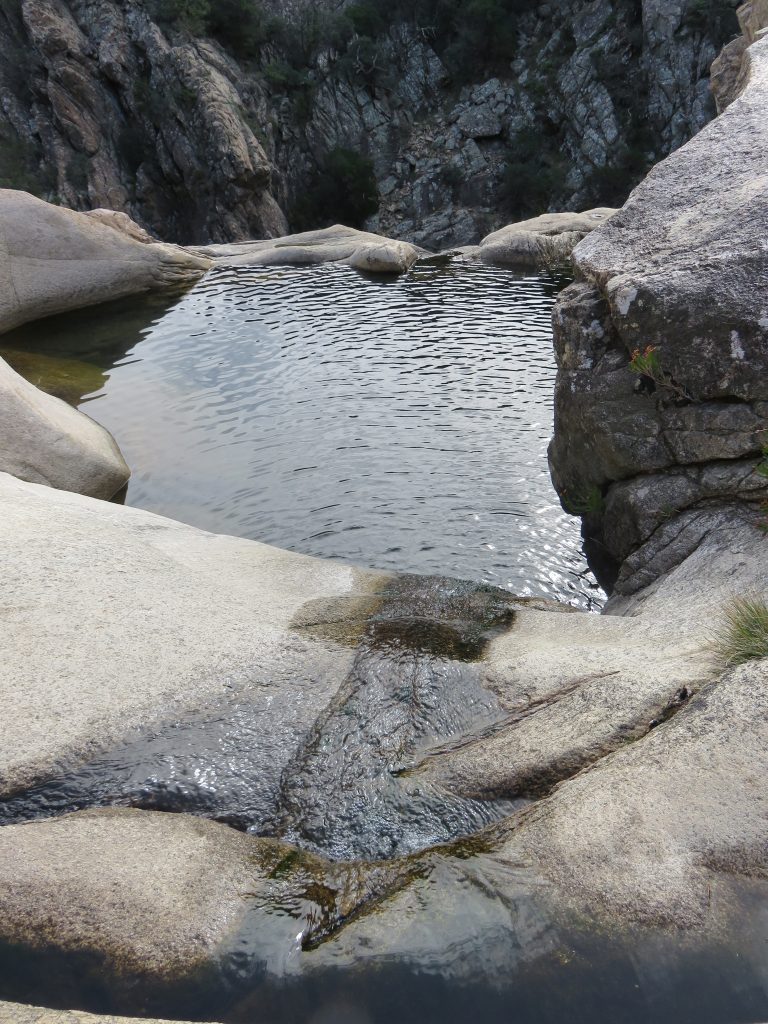 In contrast to the iridescent waters of the near shoreline, the cobalt blue waters of the lagoons are alive with both marine and aquatic life that has been instrumental in the need to protect the area. The day before our mountain excursion, we boarded a small deck boat and drifted slowly across the ‘Lagoon of San Teodoro’ allowing time to appreciate the wildlife; the boat silently passed the gaze of flamingos, kingfishers and kestrels common in this part of Italy. Two fishermen were casting their nets from their craft, as fish popped from the surface of the water as if advertising the bounty below. Our captain leaned from the side of the boat and plucked a flamingo feather from the water, a rare souvenir for one passenger. Each person on board rested binoculars on the bridge of their noses so as not to miss the lagoon’s unusual and rare habitat. The boat navigated the weathered granite boulders that were thrust from the surface millions of years ago; they were the ideal perches for Storks or Cormorants and were so sculptural in form that they were as much part of the lagoon’s gallery of riches, as the wildlife.

Throughout Galluria, these granite headlands, inlets and promontories outline the clear waters, leading to grander undulations made up of ridges and monolithic pinnacles. This is the landscape that is still worked by shepherds, where pockets of traditional and authentic Sardinian life can be found. Amongst the widespread Mediterranean bush, networks of dry stone walls divide up the land on the lower slopes. Within these boundaries, the stone built ‘Stazzo’ -shepherd farmer cottages can be found, surrounded by the crooked and bent limbs of wild olive and cork oak trees, the elder statesman of the region.

On our way to Mt Nieddu’s jagged zenith, our Landrover skirted the narrow and dusty mountain paths to reach stazzo ‘Casa Pitrisconi’; our driver stopped intermittently to share handfuls of myrtle, lavender, thyme and Arbutus fruit, all of which creates the unmistakeable Mediterranean aroma. From ‘Casa Pitrisconi’, a lung busting and boulder strewn hike brought us to the nearby rock pools perilously peering over granite gorges. Fixed rope lines dangled invitingly towards the mirror like pockets of water reflecting the granites ghoulish shapes, patterns and changing hues. Granite is a main part of Sardinia’s geological makeup and emits a palette of pinks, greys and golden tones that morph into more extraordinary shades with the passing of the seasons. 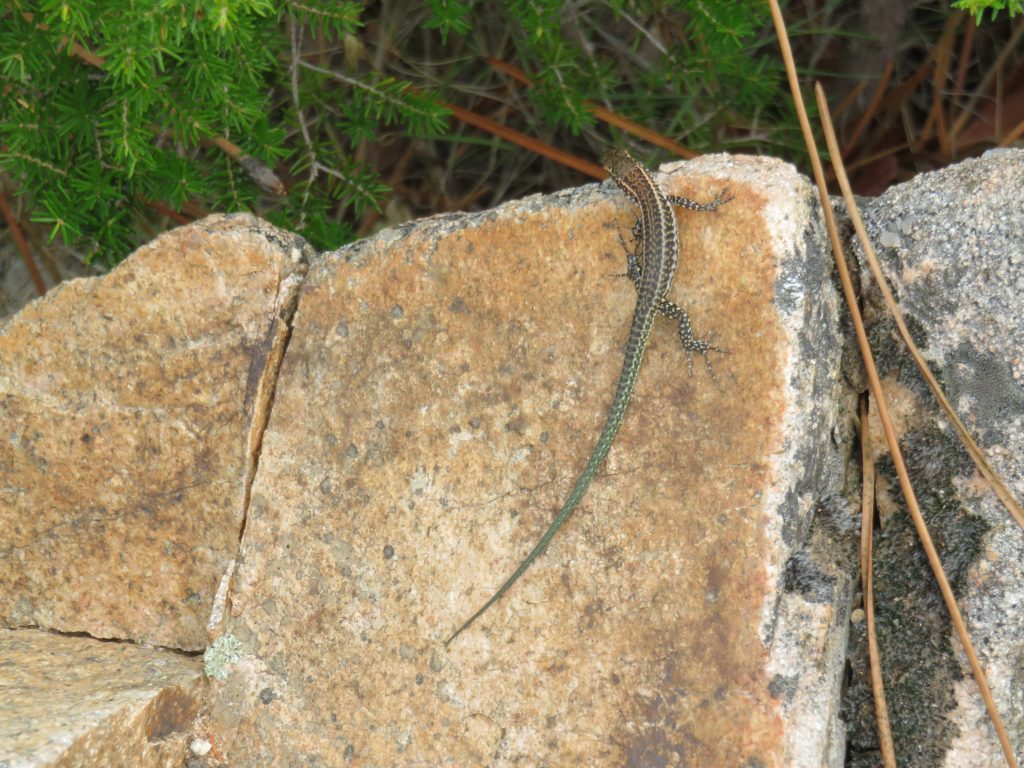 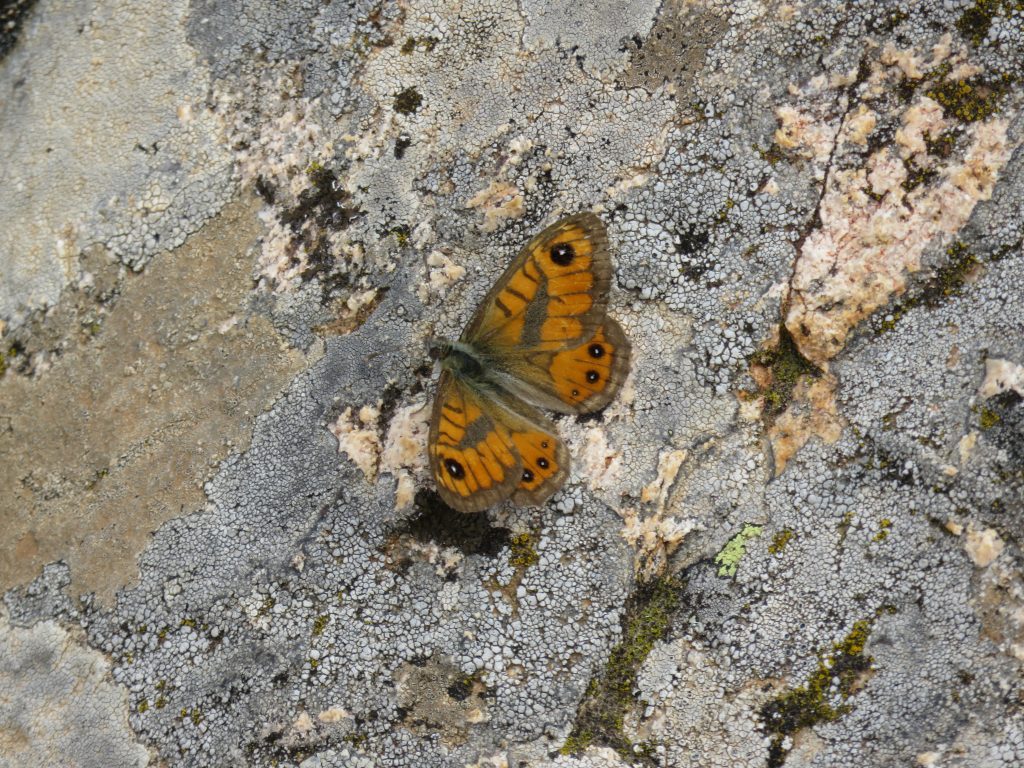 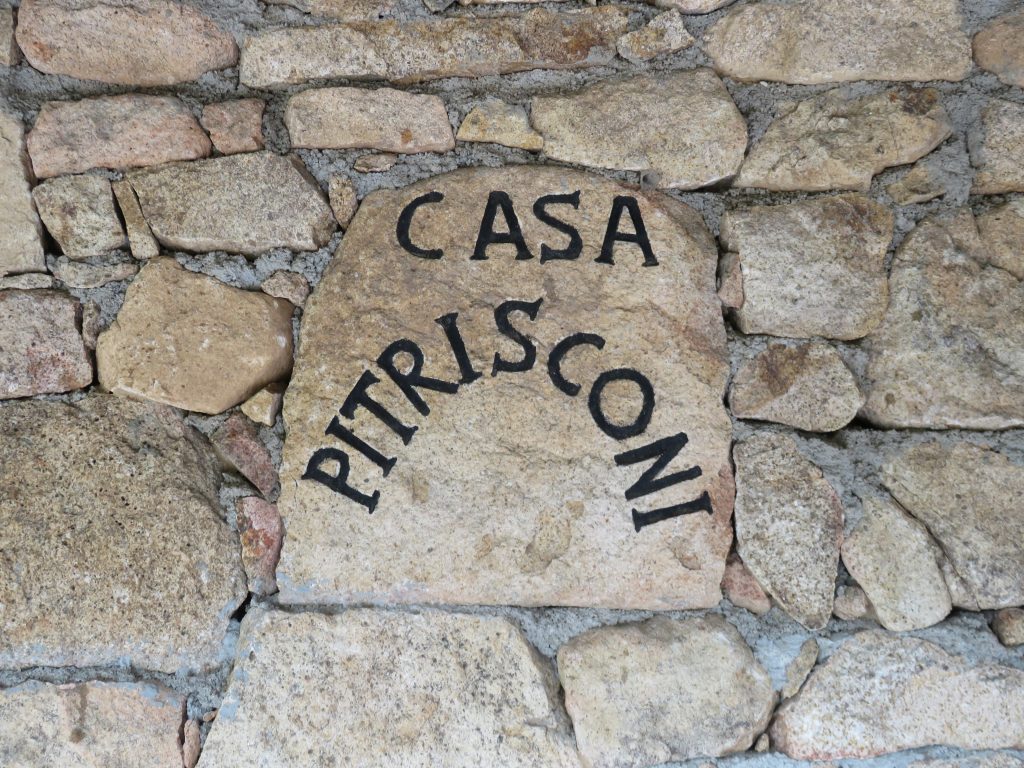 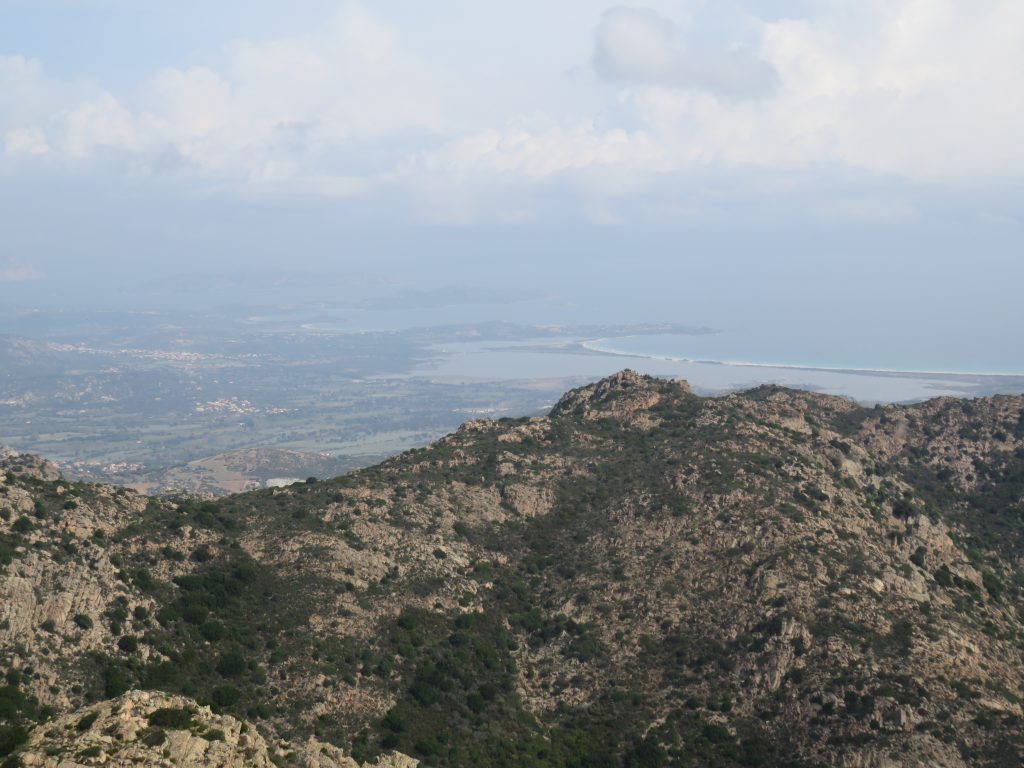 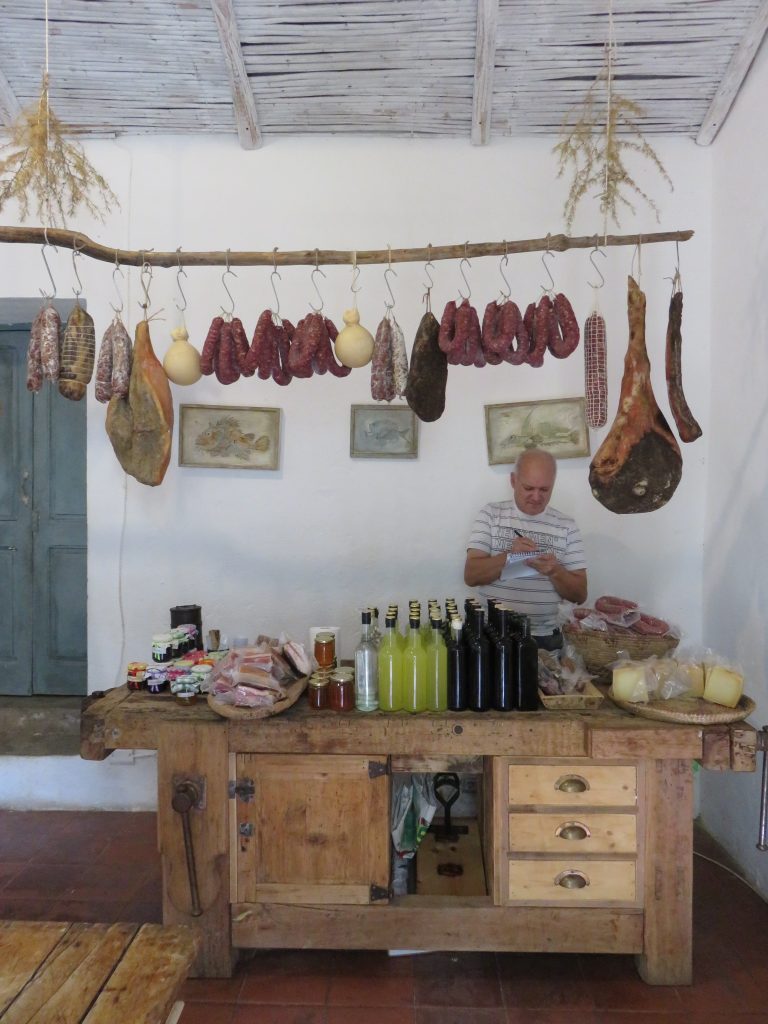 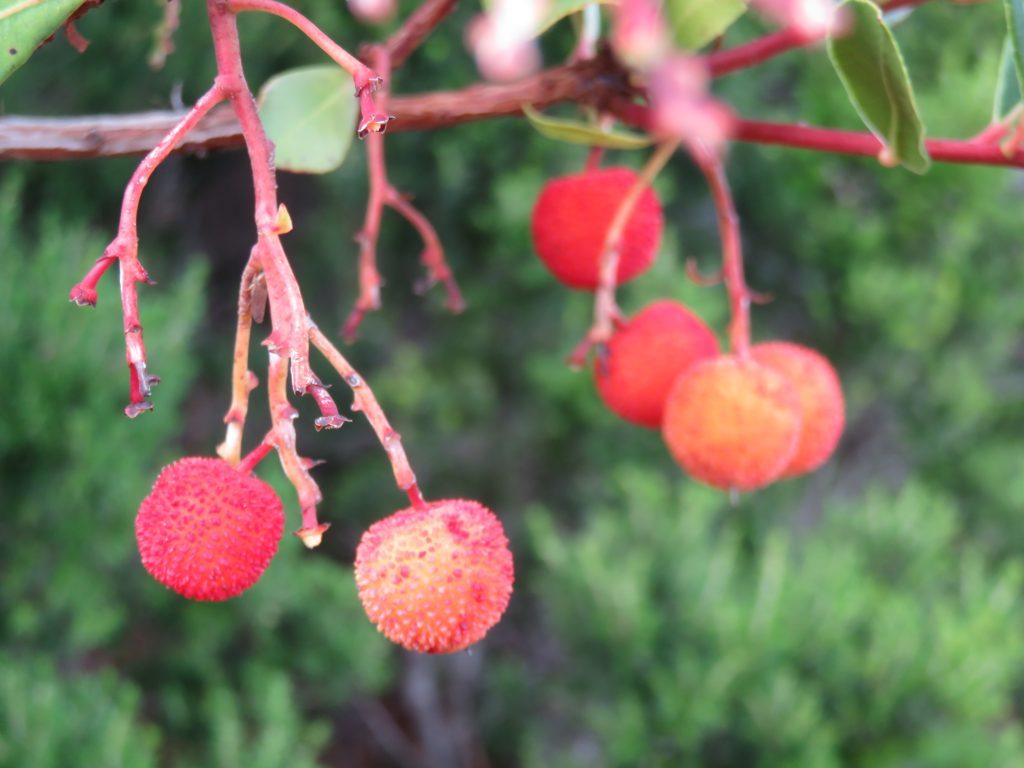 On our return to ‘Casa Pitrisconi’, the veranda table was dressed with Cannonau red wine, slices of Pecolina cheese, salami and shards of the crisp ‘Pane Carasau’ thin bread. This is the food that has always sustained the deeply proud agrarian people of Sardinia and maybe a clue to their longevity. Our hosts were quick to point out that ‘Cannonau de Sardegna’ wines tend to be high in antioxidant-rich compounds which have been linked to a healthy heart.

Gastronomy also plays an integral part in Sardinian life and Galluria is no exception. The ingredients are to be found from the land around and support the agro-economy mosaic. Sardinian cuisine is exquisite in its simplicity and is based on this rural existence. These products are characterised by roasted meats (wild animals, game and suckling pigs), breads, cheeses, cold meats and honey and will always be found on a well-laid Sardu table.

During our bumpy descent from the mountain peak, heading back to the coast, a quote I read by D H Lawrence (Sea and Sardinia, 1921) fitted the moment quite perfectly “Let it be Sardinia. They say neither Romans nor Phoenicians, Greeks nor Arabs ever subdued Sardinia. It lies outside; outside the circuit of civilisation.” It certainly felt as though, just for a short time, I was out the circuit of civilisation and had glimpsed part of Sardinia’s inner natural beauty.

Ramy Salameh stayed at the www.paradiseresortsardegna.com