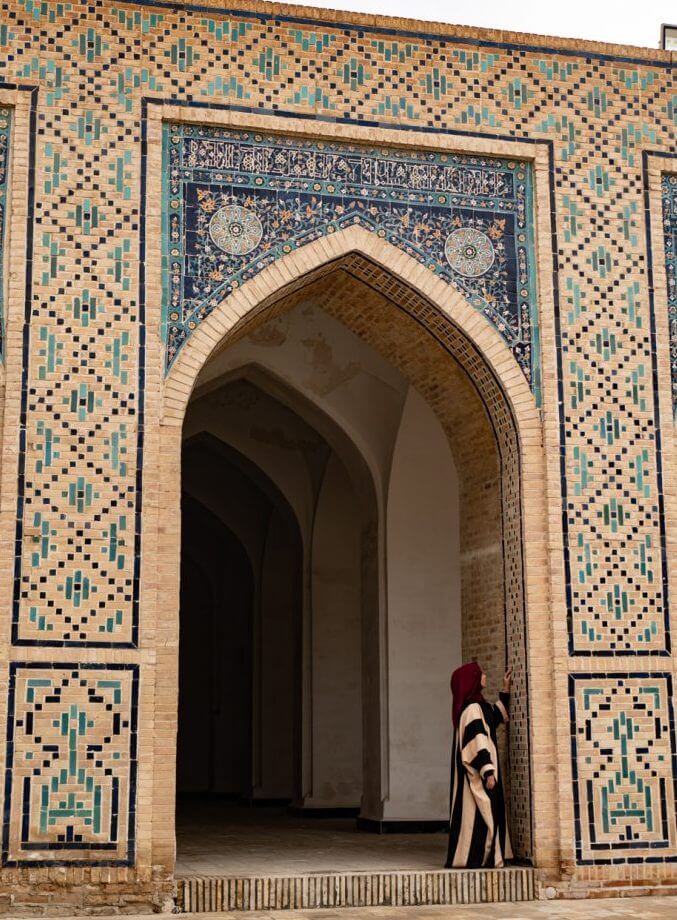 If you enjoy using social media as a virtual escape to new and exciting travel destinations, you may have seen recent photos showcasing the beauty of Uzbekistan. Over the past year, the country has become much more accessible to tourists, with the new president introducing sweeping reforms to make the country more open to the outside world.

So what’s all the excitement about?

Well, this Central Asian country is home to some of the most breathtaking architecture in the world, with a history that dates back millennia. Uzbekistan boasts an incredible culinary heritage of rich meaty broths, fragrant rice, delicate green tea and more besides.

But whilst many of the photos showcase Uzbekistan’s external beauty, there is much more to this Central Asian country than the Oriental glamour reminiscent of a set on Disney’s Aladdin.

A brief Google search on the internet about the history of Uzbekistan will probably lead you to some of the most infamous Central Asian rulers; Genghis Khan and Amir Timur. Both are often depicted as bloodthirsty tyrants who conquered vast areas of land. It’s not untrue; Amir Timur, also known as Tamerlane, is estimated have been responsible for the deaths of 17 million people in his lifetime, as he spread his rule as far west as Bursa, Turkey, all the way to Delhi in India and Russia in the north. 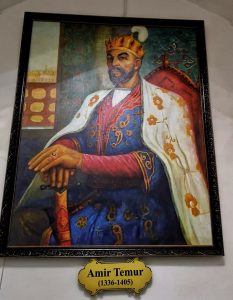 This portrait of Amir Timur hangs inside his mausoleum in Samarkand. All rights reserved Soumaya Hamdi.

But this narrative is only 2D at best.

Timur, for example, may have been a relentless conqueror, but he was also a man of learning, culture and faith. It was him who brought prosperity back to the Silk Road city of Samarkand, after Genghis Khan and his Mongol horde laid it to waste 150 years before him. Thanks largely to Timur, Samarkand was reborn as a centre of commerce, education and prosperity. This city is not just a pretty face; behind the grandeur of Registan Square and beneath the mausoleums at the Shah-i-Zinda, lies the history of one of the greatest cities in all of Central Asia. 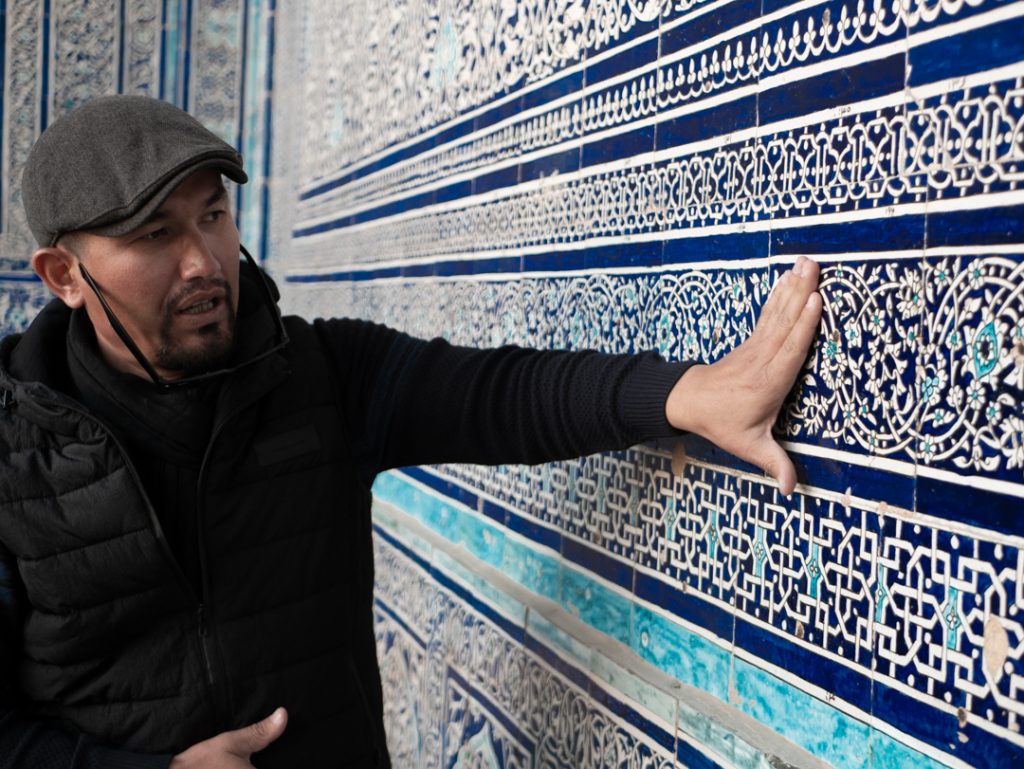 Ever heard of Avicenna, the greatest medic in the medieval world and the father of early modern medicine?

His real name was Ibn Sina, and he was a Persian Muslim polymath who hailed from the city of Bukhara. Believe it or not, his book, ‘The Canon of Medicine’, set the standards for medicinal practices in Medieval Europe. Although Ibn Sina was indeed very gifted, he was not the only one; he was both a product of and contributed towards a golden era of knowledge in science, mathematics, astronomy, medicine and more.

You know those algorithms that Instagram is forever updating? We can thank Al Khwarizmi (Latinised to Algorismi) for them, who in the 9th Century, laid the foundations for the mathematical process that is central to so many applications today.

In fact, there are numerous scholars to thank for advancements in all fields of knowledge, including Islamic scholarship. One of the most revered scholars in Islamic history hailed from the historic city of Bukhara; Imam al Bukhari.

Uzbekistan created an environment in which intellectuals were able to thrive and contribute to their societies in such influential ways, that their knowledge spread all the way to Europe and is still used today.

3. Architecture: from madrasahs to mausoleums 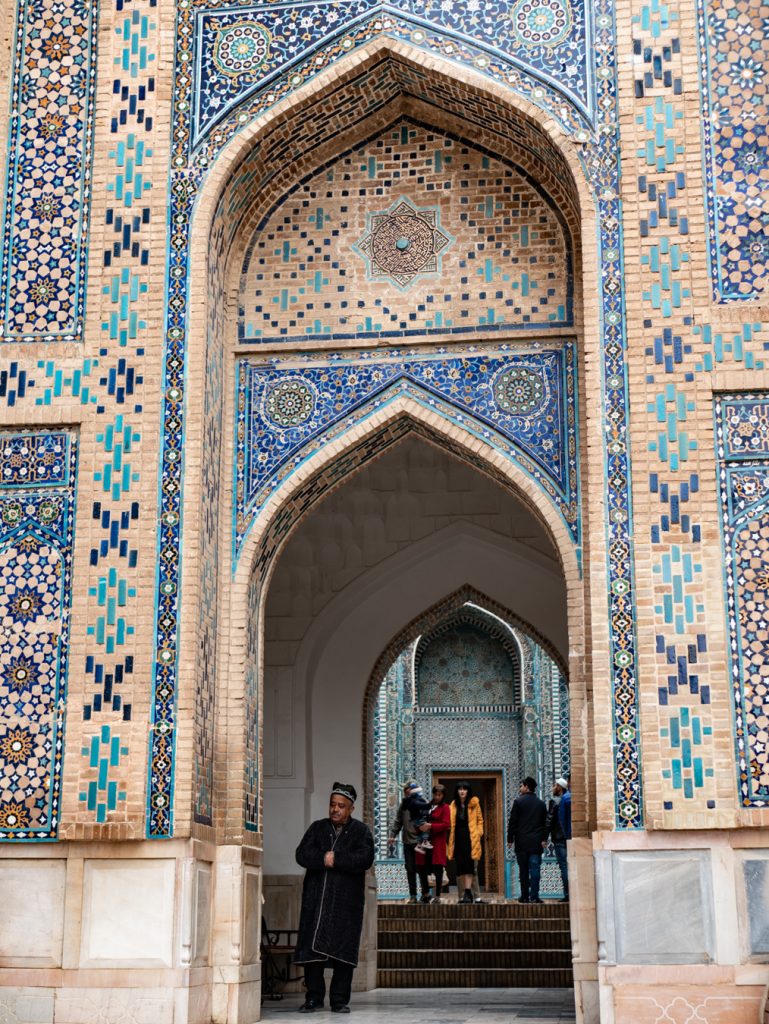 Passed this intricately decorated archway lies the tomb of where the Prophet’s (saw) cousin, Kusam Ibn Abbas, is buried (may Allah be pleased with him). All rights reserved Soumaya Hamdi.

Not only does the architecture tie in with an incredible history, but it’s also absolutely beautiful. Many of the madrasas, mosques and mausoleums that are open to visitors today have incredible stories to tell.

Below is the exterior of what became the mausoleum of Tamerlane, located in Samarkand, which inspired the design of St Petersburg mosque in Russia. Khiva, one of the cities with relatively modern architecture that dates back to the 19th Century, could be the backdrop of the live-action version of 1001 Nights. 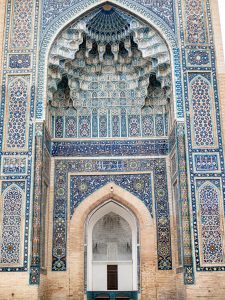 Part of the exterior of Amir Timur’s (Tamerlane) tomb in Samarkand. All rights reserved Soumaya Hamdi.

Meanwhile, the much older and grander Registan Square in Samarkand is a maze of beautiful buildings. Also in Samarkand is the Shah i Zinda necropolis, where the Prophet Muhammad’s (peace be upon him) cousin is believed to be buried. 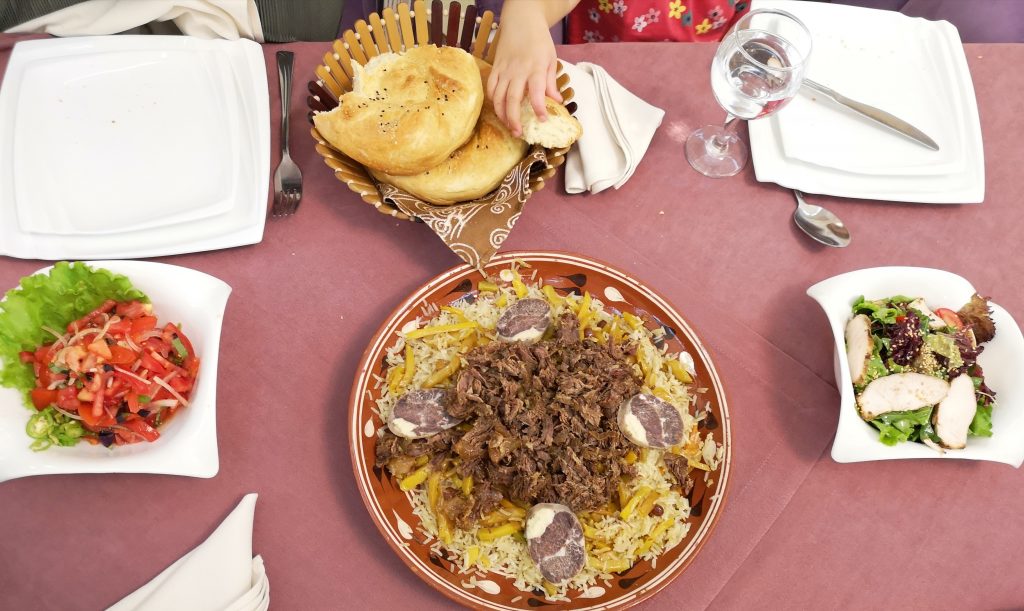 Each city has its own variation of plov, a rich rice dish made with fragrant spices and decorated with local yellow carrots, meat and, in this picture, a local delicacy of horse meat. All rights reserved Soumaya Hamdi.

It’s not often that, as Muslims, we can travel away from home and eat and drink local cuisine without needing to worry whether it’s halal.

Even if it’s possible to access authentic and halal local cuisine, street food is often a no-no because of the difficulty in identifying the ingredients or worrying about cross-contamination with non-halal food.

Not so in Uzbekistan, where halal food is the standard, with a rich cuisine that has been curated over many centuries that will appeal to even the fussiest of eaters.

Flaky somsa speckled with black onion seeds and filled with fragrant minced mutton make a mouth-watering starter. Lagman, a hearty soup/stew, is made with hand-pulled noodles using similar techniques as the Uighurs in East Turkestan (Xinjiang). Piles of steaming plov, a celebratory dish of rice, spices, carrots and meat, is paired beautifully with the delicate flavour of local green tea. All in all, I found it was worth travelling through Uzbekistan just for the adventure my taste buds experienced. Since returning home to the UK, I have had no end of cravings for plov, somsa and local Uzbek honey. 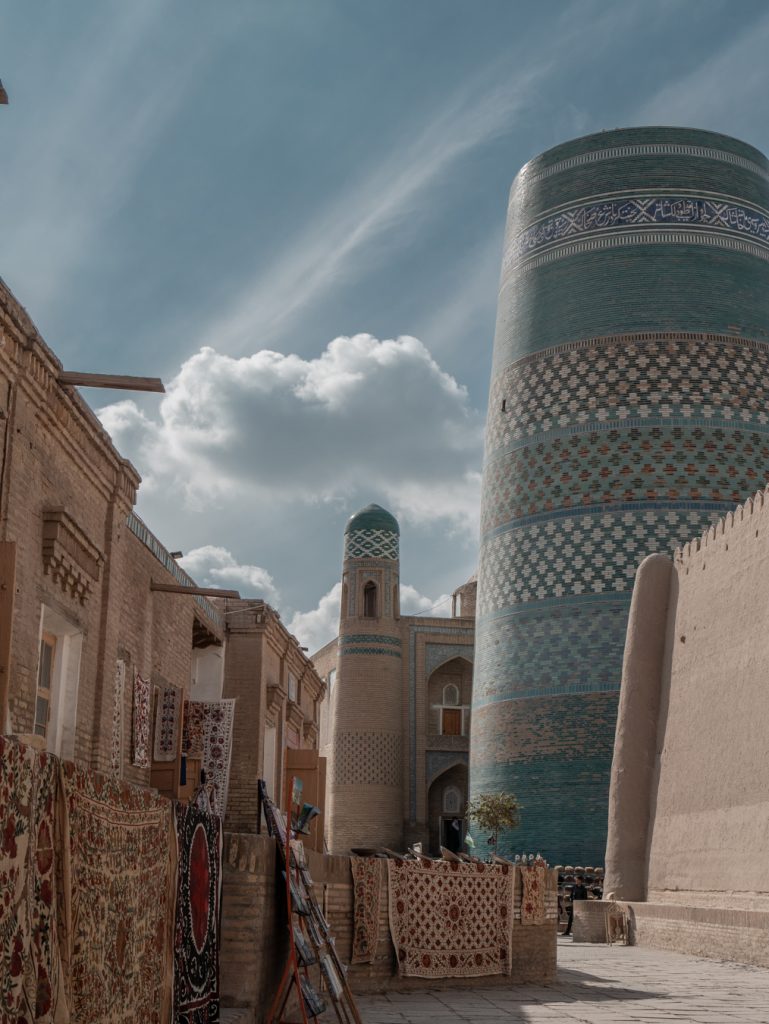 Khiva is a great starting point for exploring local artisan products such as suzane (pictured draped on the walls), bread stamps, and the famous Uzbek selection of hats including doppis and chugirmas.  All rights reserved Soumaya Hamdi.

Although the Silk Road trade has long since ended, Uzbekistan is still a great place to buy handmade artisan products that you’ll be hard-pressed to find anywhere else in the world.

Think colourful reams of Atlas silk, a national emblem worn by men and women alike. If you are looking to invest in a really unique item, purchasing a silk rug will definitely fit the bill (though you can expect it to be a pricey purchase). A small 30cm long silk rug can set you back a stomach-churning $850….but you get what you pay for. These are no mass-produced pieces. Each one is handmade by local experts, who spend months and even years weaving silk threads into all sorts of designs. For the locals, a silk rug makes the perfect wedding gift that will be handed down from generation to generation.

Of course, there are more affordable purchases. I bought a selection of suzane, hand-embroidered cloth that makes for beautiful table runners, pillowcases, and purses. Personalise your homemade bread with an Uzbeki bread stamp, or invest in a beautiful Atlas silk jacket; for men and women alike, these are definitely one to keep an eye out for. 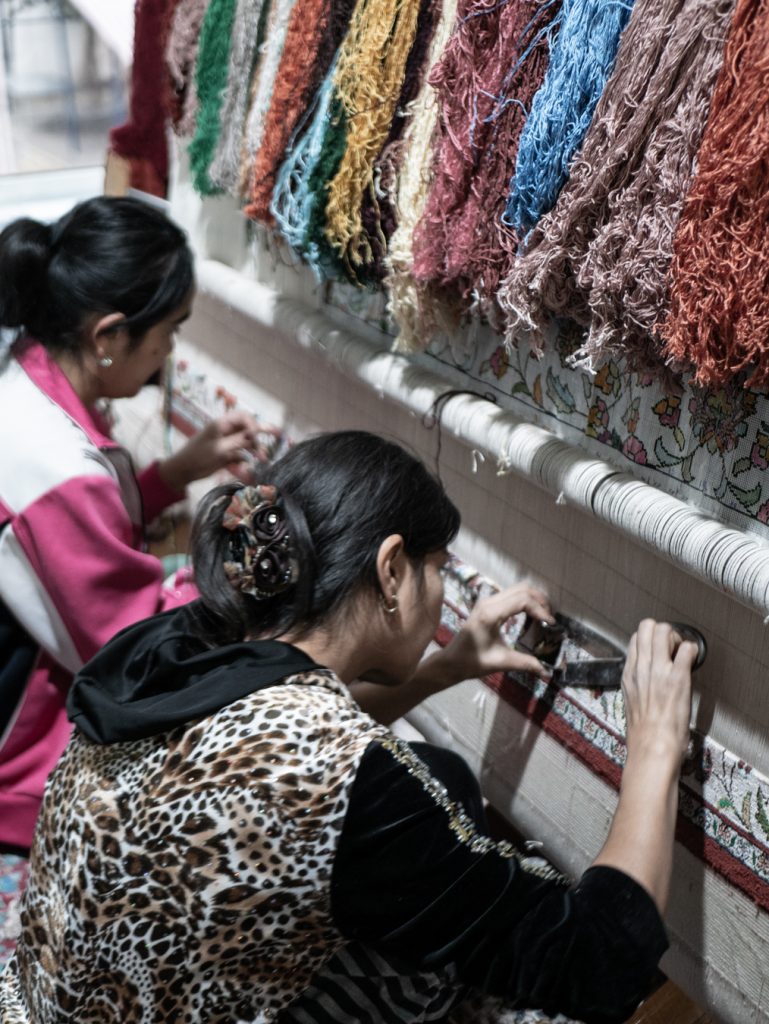 Skilled workers hand-weave hundreds of thousands of silk threads into what will eventually become a rug. These workers have strict working hours to protect them from being overworked, and child labour is not permitted.  All rights reserved Soumaya Hamdi.

The great thing about shopping here is that your money goes directly towards supporting the locals and their crafts, keeping alive traditions and practises that have been passed down and perfected from generation to generation. The local craftsmen and women demonstrate tremendous skill rarely seen in today’s world of mass-produced products.

Although it’s still a relatively new tourist destination for those of us outside of Central Asia, the last year has seen Uzbekistan pop up on many a traveller’s radar. If you want to enjoy this beautiful country, now is the time to plan your trip; it won’t be long before the sites become crowded with the selfie-takers and Instagrammers! I was fortunate enough to enjoy all of these sites without needing to queue or negotiate space with other tourists, but as the number of visitors continues to rise, will this last?

This year Halal Travel Guide is taking 3 small groups of people on the trip of a lifetime to Uzbekistan. To find out more and sign up, head over here.